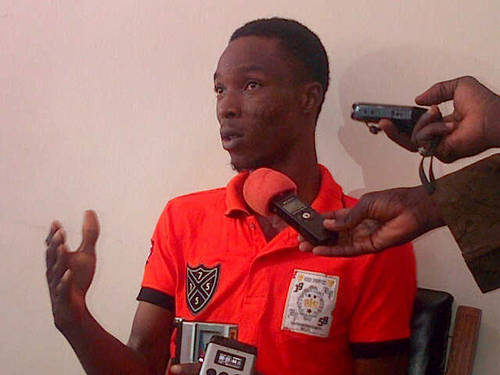 It is better to lead from behind and to put others in front, especially when you celebrate victory when nice things occur. You take the front line when there is danger. Then people will appreciate your leadership – Nelson Mandela

He pulls the crowd and wows the populace especially the motor bikes riders who form his motorcade whenever he arrives at a city, town or village. He is a general of the masses with charisma to make them do their bidding. He runs the town with his political slogan of alternative change, said only in a phrase but never telling those he intends to govern on how he will effect the change. He tells us how corrupt the ruling government is, without telling all that he is a big beneficiary of the so called ‘looting government’. And finally, he takes us for fools who are desirous of having him at the centre of leadership, but unknown to him; some of us are good students of history who will remind you of your past when it matters most. This is the season where we have to unmask one of those who wants to govern us – Great Ovedje Ogboru.

I have refused to talk on the Ogboru movement based on hearsay and in my usual manner have gone round Sapele, Abraka, Ethiope West, Ethiope East and the Ughelli axis to carry out investigations about him. For years, Great Ovedje Ogboru has strutted the Delta political theatre preaching on the necessity to save the State from God knows what, using himself as the singular symbol for the change. But while we earnestly seek for change and progress, we cannot hand over our state to one who has blood stains on his hands.

Ogboru’s claim to fame is the failed Gideon Orkar coup which he sponsored, an action which he helped masterminded, nursed and cause the loss of lives of innocent Nigerians, especially Deltans and yet has kept mute on his role. We may all have heard on how Orkar staged the coup, but let truth ne opened before us today. Ogboru owns a fishing company called FIOGREAT, which unknown to many people is a coinage of his name (Great) and girlfriend called FIONA. While the coup was being plotted, Ogboru drafted some young able bodied men, and deceived them that he was going to give them job in the company, but when they got to Majindu, Ikorodu, where the company was located, the tide changed as they were given guns and drugs, brainwashed into why they must be involved in removing the government of the day. One of those who were deceived to be part of the coup was Late Corporal Goodluck Otojareri aka Organ from Atiwor, Ethiope West, Delta State, who was a retired army officer and resting in the village before Ogboru brought him on board due to his heroic exploit during the Nigeria Civil war. This coup sponsored by Ogboru claimed his life and today the blood cries against the Peoples General.

We are not done yet with this coup plotter who has suddenly realized that the best form of governance is democracy, yet lured Mr Money from Ekroda village into the coup only to have him killed. The death of Mr Imoni from Oyobru Waterside village and his wife becoming a prostitute later due to the death of their breadwinner and the sons becoming wayward is a testament to the man who wants to govern our dear state.

The Ogboru Deltans are yet to know is a man secretly at war with Rtd Major Mukoro from Isoko, Rtd Major Saliba and Lieutenant Col. Iyam who are still angry with him that he set them up in a coup and betrayed them to the enemy camp. Jackson Odova from Irhodo, Jesse was arrested for being an associate of Ogboru, while Mr Dafe from Ughelli spent years in detention at DMI just for being close to Ogboru, even when they had no hands in the coup. Another man from Mosogar was killed due to his ill fated coup and all these bloods daily speak against a man who could not get power through the backdoor but wants it now through the front door. Till date, no member of the family has Ogboru paid a condolence visit to, after causing their death, and yet he still seeks the votes of the families of these great Urhobos.

As I type on my laptop from my hotel room, I’m listening to Flavor music ‘Gollibe’, which is tempting me to be romantic with my write up, but the urge to say the bitter truth and rescue Deltans from the hands of impending dangers and mistake is stronger. Ogboru’s entrance into Delta politics have only led to families regretting, due to the bloodshed associated with it. In 2007, a bike rider insisted that Ogboru’s vote must count in Kokori, Ethiope East LGA, but was shot dead by a then serving member of the Delta State House of Assembly who is now in the Federal level. Various sources confided in this columnist that the lawmaker’s bodyguards held the bike rider and the lawmaker personally pulled the trigger at close range, killing him and what did Ogboru do till date. Absolutely NOTHING! And he has also not deemed it fit to pay a visit to the family of his diehard supporter. Do I need to remind us that in 2007, one of Ogboru’s relations who insisted on seeing him becoming a governor got missing till date, and mum has been the word from the so called general?

Deltans cannot afford to have a man like Ogboru who’s only aim is to make money during electioneering period knowing that he has become a sort of colossus among the people. If in doubt, anyone should pay a visit to Fiogreat and see how the place bubble with life, yet two years ago, this same company was already dead. What happened? He has once again gotten money from prominent and wealthy Deltans to pursue his election, and while he uses half for the electioneering process, he pumps the other half into his business. Ogboru’ is simply a business and career politician whose sole aim is to make money from the masses he wishes to govern. Call him a political whore and you are not far from the truth. Which serious politicians comes home every four years with a new party to introduce to his people, likened to a man who changes wife every four years and bring them home to his parents?

In 2007, during the re-run, sources said Ogboru was allegedly given millions by Bola Tinubu to dislodge Governor Emmanuel Uduaghan from office, but he was unable to do so, and despite his supporters believing that he won the election, the general left his followers and ran to Lagos. Consequently, his elder brother, Julius Ogboru dumped the defunct Democratic Peoples Party (DPP) for the PDP. What greater shame can be worse than that coming from ones household? We cannot love Great more than Julius who has seen through Ogboru’s action and knows that all that he seeks is just political relevance. We just cannot be more Catholic than the pope.

Ogboru is one person who if he becomes governor will deceive civil servants that he wants to give them jobs only to lure them into another coup in another bid to become President of Nigeria. He has kept deceiving the Urhobos that he is the messiah that he is not and rather than join hands with the ruling party and make us relevance, his greed has relegated us to the background, and yet some people still follow him, but again, that is politics; where everybody cannot toe the same line of thoughts and actions.

What general runs away from the battlefield? But Ogboru not only runs from the battlefield, but he causes the crisis, drag his supporters into being killed and when it matters most, he FLEES to Lagos. He only come, sees and runs away! Have the Urhobos not been fooled enough to realize by now that Ogboru means nothing but bad luck to the tribe political calculation? Are the experiences of the past eight years not enough for them to realize that being in the opposition for eight years is enough to wipe away all the political values we have in the country? Can someone be bold enough to tell Ogboru that as it stands, his entrance into the race is an ill wind that blows no good?

Urhobos may not know it, but as it stands, the political wire connecting the State has been connected to Anioma with the switch located in the hands of Senator Ifeanyi Okowa to light up the state to prosperity. There are times and seasons for everyone and the time for Okowa to lead is now; and fighting him for his rightful inheritance which even the celestials signed long before he was born will be fighting God himself. And who dares God and not incur his wrath?

Are there no old men in Urhobo land to warn Ogboru to be patriotic enough and let his ambition wait till probably 2023 when it will be the turn of the Urhobos when he would have probably joined the PDP or play the role of a Statesman, since he might be too old then, while young men like us take over the saddle of leadership? Will someone be sincere enough to warn the peoples general that knowing when to quit when the ovation is loudest is more honorable than losing graciously? Ogboru has made his mark and he is destined to be rich by whatever means, but to be a governor was never in his star during creation.

Fejiro Oliver, Editorial Board Chairman of Secrets Reporters, Media Consultant and Human Rights Activist is also the Co-Convener of Coalition of Human Rights Defender (CHORD) and can be reached on +2348022050733, +2348160067613 (SMS ONLY) or [email protected]. Engage him on twitter on @fejirooliver86