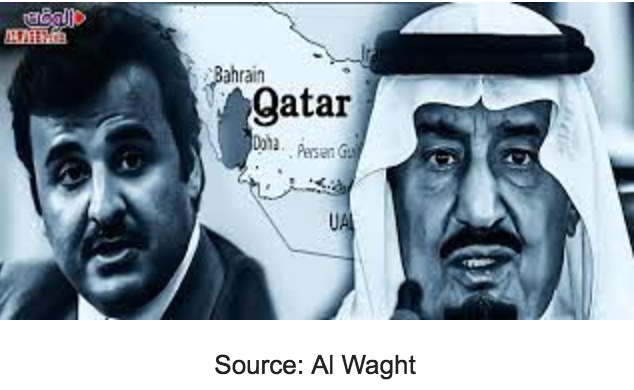 Saudi Arabia and the United Arab Emirates, by breaking off not only diplomatic but also economic relations with Qatar, is likely to make it this time round far more difficult for the Gulf state to resist pressure to change its controversial policies.

The stakes are far higher than when Saudi Arabia, the UAE and Bahrain withdrew their ambassadors from Doha in 2014 for a period of ten months, but failed to force Qatar to change its policies. Saudi Arabia and the UAE by now also breaking off economic ties are also seeking to disrupt Qatar’s air, sea and land links and complicate its exports and imports, and particularly its food supplies.

The stakes are also higher given that Qatari fulfilment of Saudi and UAE demands would humiliate the Gulf state to a degree that it would become a vassal of its bigger Gulf brethren.

The demands are believed to include the muzzling if not closing of Qatar-backed media, including Al Jazeera, the Arabic version of The Huffington Post and London-based Al Araby Al Jadid and Middle East Eye. Saudi Arabia on Monday ordered the closure of Al Jazeera’s bureau in the kingdom.

Saudi Arabia and the UAE are also seeking the expulsion of all leaders of the Muslim Brotherhood and Hamas, the Palestinian group that controls the Gaza Strip, as well as Azmi Bishara, a close associate of Qatari emir Sheikh Tamim bin Hamad Al-Thani, who heads the Doha Institute.

Saudi Arabia and the UAE are further demanding that Qatar limit its relations with Iran to economics based on the fact that it shares the world’s largest gas field with the Islamic republic.

Fuelling the hard line against Qatar is fury over the Gulf state’s alleged payment of  a $1 billion ransom to an Al-Qaeda affiliate in Syria and Iranian security officials for the release of 26 members of the Qatari royal family and about 50 militants captured by jihadis in Syria. The Qatari royals were kidnapped in December 2015 while on a falcon hunt in southern Iraq.

By targeting food supplies, Saudi Arabia and the UAE are testing Sheikh Tamim’s mettle and seeking to engineer a situation that potentially would be conducive to his replacement if he fails to bow to Saudi and UAE demands. Various media reports have already suggested that the two states may be gunning for his removal as emir.

Qatar’s ability to resist the Saudi and UAE pressure is likely to be determined by how the United States responds to the Gulf crisis, to what extent Saudi Arabia and the UAE seek to force third parties to abide by their boycott, and whether Qatar can maintain food supplies and ensure that prices don’t go through the roof.

Trade sources said that Saudi Arabia and the UAE had halted their exports to Qatar of white sugar. Consumption of sugar in the Gulf state, like elsewhere in the Muslim world, is highest during the current holy month of Ramadan. Qatar imports an average of 100,000 tonnes of white sugar a year.

Panicked Qataris rushed Monday to supermarkets to hoard food and water supplies after news broke that their country’s frontier with Saudi Arabia, Qatar’s only land border, had been closed.

Saudi Arabia and the UAE accounted for roughly one third Qatar’s $1.05 billion of food imports in 2015. Much of the imports, especially dairy products, came over the Saudi land border.

As food trucks reportedly lined up at the closed Saudi border with Qatar, Iran’s Fars news agency quoted Reza Nourani, chairman of the union of exporters of agricultural products, as saying that Iran could supply the Gulf state with what it needs. Mr. Nourani said it would take 12 hours for shipments from Iran to reach Qatar by sea.

Working in Qatar’s favour is the fact that the Gulf state’s main source of revenue, its oil and gas exports, remain untouched by the economic sanctions. Qatar, the world’s largest LNG supplier, maintains access to international shipping route even if Qatar-bound vessels and ships leaving the Gulf state are barred from entering the territorial waters of Saudi Arabia, the UAE and Bahrain.

Japan’s JERA Co, the world’s biggest buyer of liquefied natural gas, said in a statement that Qatargas had informed it that the crisis in the Gulf would not impact LNG supplies.

The UAE, moreover, in what appears to be a self-serving move has not included the import of Qatari natural gas in its sanctions. The gas is exported to the UAE as well as Oman through a pipeline that is co-owned by Abu Dhabi’s state-owned Mubadala Development Company. Sources said there was no indication that the pipeline would be closed.

The UAE may have wanted to prevent the schism in the Gulf from widening if Oman would have been penalized by a closure of the pipeline. Oman, like Qatar, maintains close relations with Iran and has sought to distance itself from the Saudi-UAE campaign against the Islamic republic.

Both Gulf states have leveraged their relationships to mediate at times, but Oman, unlike Qatar, remains low key and keeps more distance to Islamist and militant groups like the Muslim Brotherhood and Hamas.

Dubai, moreover, depends on Qatar for 40 percent of its gas imports, while Egypt, which joined the Gulf states in breaking off diplomatic relations with Qatar, relies for 60 percent of its imports on Qatar. S&P Global Plattsreported that Egypt expects two Qatari gas shipments to arrive on June 10 and 11.

One Qatari entity that is likely to be hard hit by the Saudi-UAE led boycott is Qatar Airways. The suspension of flights between Qatar and its Arab detractors constitutes a loss of lucrative destinations and forces it to fly longer routes to Asian and African destinations in its need to circumvent Gulf airspace. The suspension comes on the back of dented earnings as a result of the prolonged slump in oil prices and a ban on carrying some electronics in cabins aboard US-bound flights.

Similarly, Qatari banks, already struggling with declining cash reserves and higher interest rates, could be hard hit if Saudi Arabia and the UAE opt to withdraw their foreign deposits. Non-resident deposits made up 24 percent of deposits in the country’s 18 lenders in April, according to Qatar’s central bank. It also remained unclear whether Saudi and UAE commercial banks would continue dealing with their Qatari counterparts.

Saudi Arabia and the UAE could also squeeze Qatar where it hurts by rekindling the campaign to deprive the Gulf state of its 2022 World Cup hosting rights. The awarding of the tournament to Qatar sparked widespread protests because of its controversial labour regime that is common to the Gulf and allegations of bribery and corruption in its bid. World soccer body FIFA said in a statement that it was “in regular contact with Qatar,” but had no further comment.

In emails leaked this week, UAE ambassador to Washington Yousef al-Otaiba, responded to a recommendation by a Washington policy wonk that he watch a documentary about FIFA’s legal troubles by saying: “FIFA and Qatar combined are the poster children for corruption.” Loss of the World Cup would drive a fatal nail into the coffin of Qatar’s soft power ploy. The cutting of all transportation links to Qatar could moreover further cause a rise in the cost of World Cup-related infrastructure and fuel inflation.

The rupture in diplomatic and economic relations came as Washington was engaged in a debate about alleged Qatari support for militant groups and its failure to act against militants listed by the US treasury as globally designated terrorists.

The debate was in part driven by a long-standing UAE campaign against Qatar, It was further fuelled in recent days by Mr. Otaiba’s efforts to get the Trump administration to move the US Central Command’s forward base and some 10,000 American troops stationed at Qatar’s sprawling al-Udeid Air Base, the largest US military facility in the Middle East, to somewhere else in the region. Moving the base to either Saudi Arabia or the UAE would constitute a body blow to Qatar.

Ed Royce, the Republican chair the House Foreign Affairs committee further raised the stakes last week when he told a UAE-backed gathering in Washington that “if it doesn’t change, Qatar will be sanctioned under a new bill I’m introducing to punish Hamas backers.”

Ironically, US forces moved to Qatar in the 1990s after Saudi Arabia, afraid of a public backlash against the presence of foreign troops, asked them to leave the kingdom and the UAE at the time was unable to accommodate the forces.

The kingdom’s state-owned Saudi Press Agency reported that the kingdom would “start immediate legal procedures for understanding with fraternal and friendly countries and international companies to implement the same procedure as soon as possible for all means of transport to and from the State of Qatar for reasons relating to Saudi national security.”

The statement appeared to be referring to Saudi transport links with Qatar but seemed to hold out the possibility of Saudi Arabia pressuring its public and private economic and commercial partners to follow suit in cutting ties with the Gulf state in what would amount to an attempt at imposing a more global boycott. Mr. Al Otaiba’s leaked emails showed that he supported efforts to persuade US companies not to pursue opportunities in Iran, an approach that could be also applied to Qatar.

The long and short of all of this is that short of Sheikh Tamim caving into demands, Qatar could be in for pro-longed fight. Saudi Arabia and the UAE have become far more assertive as a result of former US President Barak Obama’s perceived withdrawal from the Middle East and lack of empathy for their concerns. The rise of Donald J. Trump has not only given them a measure of reassurance but also a sense that they now have in the White House an ally that shares their visceral opposition to Iran and political Islam.