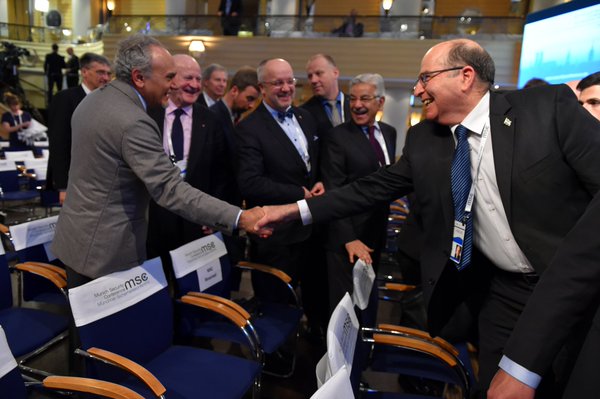 Persian Gulf states are seeking nuclear weapons to counter “bad guy” Iran and have held clandestine meetings with Israel despite not having official ties with Tel Aviv, Defense Minister Moshe Ya’alon revealed at the Munich Security Conference in Germany.

“We see signs that countries in the Arab world are preparing to acquire nuclear weapons, that they are not willing to sit quietly with Iran on brink of a nuclear or atomic bomb,” Ya’alon told fellow defense ministers on Sunday, the final day of the Munich Security Conference.

Ya’alon did not name specific countries who might be interested in developing nuclear weapons and gave no evidence to back up his claims.

However, he then made a surprise statement that the Gulf states – officially hostile to Tel Aviv because of its occupation of the West Bank – had held clandestine meetings with Israel.

“Not only Jordan and Egypt,” he said, referring to the only Arab countries who signed peace treaties with Israel after three Arab-Israeli wars.

“I speak about the Gulf states and North African states too. Unfortunately they are not here to listen. For them, Iran and the Muslim Brotherhood are the enemy. Iran is the bad guy for us and for the Sunni regimes. They are not shaking hands [with Israelis] in public, but we meet in closed rooms.”

Almost immediately, when Ya’alon finished his speech, Saudi Arabia’s Prince Turki al-Faisal, who was also attending the discussion, asked to make an intervention: “Handshakes with Israelis have not helped the Palestinians much.”

I met today his Majesty the King Abdullah the Second of Jordan, during the security conference in Munich.

Prince Faisal insisted that Sunni Arab countries, including Gulf monarchies, are furious with Israel over the occupation of the West Bank and its treatment of the Palestinians in the Gaza Strip.

“Why should the Arabs feel friendship to you when you do that [to the Palestinians]?” he asked.

Gulf countries’ ancient rivalry with Iran has a religious dimension. The predominantly Sunni monarchies accuse Tehran of trying to dominate the region by backing Shia minorities all across the Middle East. In 2004, King Abdullah II of Jordan, one of the most pro-American Arab rulers, described it as a “Shia crescent.”

The notion refers to a crescent-shaped region of the Middle East where the majority population is Shia or where there is a strong Shia minority in the population.

In the meantime, Israel is widely believed to possess dozens of nuclear warheads, although official statistics do not exist.

Israel possesses Jericho-3 ballistic missiles capable of delivering up to 1,000kg load at ranges of 4,800 to 6,500km. Additionally, it is believed to have a naval nuclear strike capability, using Dolphin-class submarine-launched nuclear-capable cruise missiles.