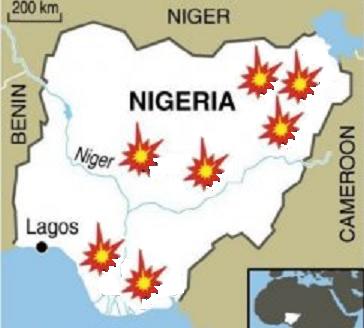 According to eyewitnesses the attacks took place in Moro’a Chiefdom in Kaura local government area of Kaduna state.

Saharareporters sources said residents of  Me-sankwai, Tekum and Ungwan Gatah villages all under the Moro’a Chiefdom were woken from sleep in the early morning raid  by fuulani attackers attackers overnight with several men, women and children massacred.

Several homes were also set on fire by the rampaging attackers. Some eyewitnesses stated that some villagers were simply roasted in their homes.

“We are mourning, they came around 11pm when we were sleeping and started attacking until around 2am. There was no security presence or protection.” said a villager who lost family members.

“Children, women and aged ones were among those they killed with guns, machetes and others were burnt to death in their homes.” stated a traditional chief in the area who spoke to Saharareporters by phone.

“They took scores of our people with them into forests in all the villages; this is not fiction but the reality of our predicament. Please, help us let the whole world know because the security agencies and the government are suppressing information about our communities.”

A senior police officer who did not want his name revealed also  confirmed the attacks, but said they are yet to ascertain the actual number of those killed.

Southern Kaduna, a predominately Christian community has been subjected to reprisal attacks by Fulani herdsman since violence erupted after the 2011 general elections.