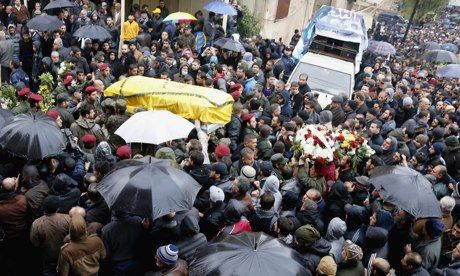 A senior Hezbollah commander has been shot dead outside his south Beirut apartment in the biggest blow to the secretive Shia militia since its then military commander was assassinated by a car bomb in the city six years ago.

Hezbollah blamed Israel for the killing, saying it had twice before tried and failed to target Hassan Howlo al-Laqqis, who is understood to have been the group’s overall logistics and procurement chief.

Before Laqqis’s funeral in Hezbollah’s Beeka valley heartland, a statement from the militant group said Israel “should bear full responsibility and all the consequences of this heinous crime and its repeated targeting of dear resistance leaders and cadres”.

Israeli officials denied any involvement. “Unequivocally no. We had nothing to do with it,” said Israel’s energy minister, Silvan Shalom. “The Salafists over there did it,” he added, referring to a fundamentalist Sunni insurgency in Syria and Lebanon that has in recent months vowed to take the fight to the Shia Hezbollah.

An unknown group claiming to represent Lebanese Sunni interests took to Twitter to claim responsibility for the killing. In late November, another Sunni group, the Abdullah Azzam Brigades, used the same forum to claim it had sent two suicide bombers to blow up the Iranian embassy in Beirut, an attack that killed more than 20 people, including a diplomat and up to four Hezbollah guards.

Renowned for its secrecy and discipline, Hezbollah closely guards its inner secrets, particularly its military command structure and the identities of senior militants who lead operations against Israel and, increasingly, against groups fighting the regime of its key backer, Syria’s president, Bashar al-Assad.

Laqqis is understood to have held a position on the group’s Jihad Council, which gave him a stake in the group’s strategic decision-making and in devising military tactics. Sources in Beirut said his status had grown steadily since the assassination of Hezbollah’s former overall military chief, Imad Mughniyeh, who was killed by a car bomb detonated by Israeli agents in central Damascus in February 2008.

Unlike that killing, however, Laqqis’s death triggered few rumours in Tel Aviv of Israeli involvement. “And the question that is being asked is who did this,” said a source with connections to Israeli security figures. “This one looks homegrown.” Read full on Guardian