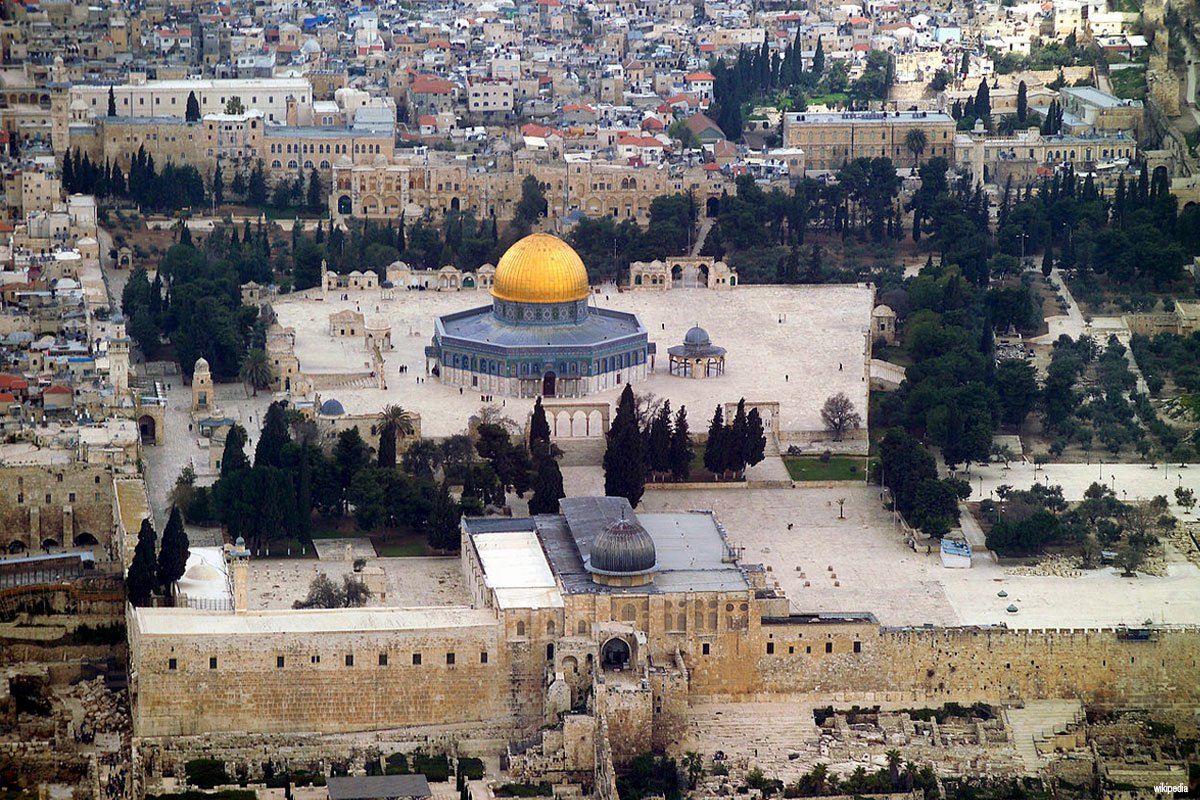 The United Nations Educational, Scientific and Cultural Organization (UNESCO) became the subject of much debate after its controversial October 16, 2016 decision, which conflicts with its declared purpose, to recognize Jerusalem and its holy places only by its Muslim name: Al-Quds. Thus, the Jews’ 3,000-year and the Christians’ 2,000-year connection with the Holy City were erased.[1] UNESCO, whose motto is “building peace in the minds of men and women,” signed off on a political decision that fueled conflict. Despite significant efforts to prevent this historical mistake,[2] sacred places are now tools for a propaganda war.

This openly biased resolution will further undermine public trust in the UN and its organs. But, of course, that will be the least of it. The main worry is the repercussions of this action affecting such a sensitive place. Last year, right after Israel was accused of violating the status quo on the Temple Mount,[3] some Palestinians embarked on a protracted wave of stabbing and car ramming attacks. Many innocents lost their lives and loved ones.

The spiritual and material connection of the Abrahamic religions to Jerusalem is indisputable. The Temple Mount, which is referred to as Haram al-Sharif (Noble Sanctuary) by Muslims, is sacred to all monotheistic religions. It is where many prophets made their proclamations for thousands of years, where Jewish prayer has focused hearts, and where Jesus ushered in a faith that would transform mankind (and indeed, lead to Islam itself). Jerusalem and its holy places are the common heritage of these three religions, and no political decree can change that fact.

However, recently, the sacred places of Jerusalem have become the focal point for political conflicts. Certain circles came up with an unrealistic claim suggesting that Jews never used the Temple Mount before the Balfour Declaration of 1917.[4] The simple truth is, however, that throughout history, Islamic scholars continuously affirmed the fact that the Temple Mount is a sacred place for the Jews, and also described it as the site of Solomon’s Temple. Other Arabic names for Jerusalem and the Temple Mount are Al Quds, or more fully “Bayt al-Maqdis” which comes directly from the Hebrew name mentioned in the Bible, Beit HaMikdash (The Holy House). With the foundation of the State of Israel, that recognition of fact became controversial and then anathema to some of Israel’s detractors.[5] Gradually, such rhetoric turned into an outright rewriting of history whereby Jerusalem and the Jews are only recently acquainted.

In fact, Islamic history shows us the common legacy of Jerusalem for Jews and Muslims very clearly. In Islamic tradition the Prophet Muhammad [peace be upon him] went on a night time journey to Al Aqsa, the “furthest mosque,” and from there ascended to heaven. During his lifetime the only thing in that place was the ruins of the Temple and ruins of a Roman temple and a church built on the holy site.

Jews were not allowed to live in Jerusalem upon pain of death. After the Romans quelled a Jewish uprising and destroyed the Jewish Temple in 70 AD, precisely because this was the most important place to the Children of Israel, it was the Muslim Caliph Omar who welcomed Jews back to their ancient capital. He cleared the Temple Mount of garbage and built places of worship there, for the reason that this area was central to the prophets. During the rule of the Abbasids, Jews continued to live in the area until the Crusaders captured Jerusalem, massacring Jews and Muslims. During the reign of the Muslim leader Saladin, Jews were again invited back to the city. Similarly, throughout the Ottoman Empire’s rule in the region, Jews were always present in Jerusalem. The laws governing Jewish prayer at the Western Wall, where Jews were banned from the Temple Mount, were set by Suleiman the Magnificent in the 16th century, and throughout the 400 year rule of the Ottoman Empire, Jews worshiped in front of the wall.[6]

In the 20th century, Jerusalem’s Supreme Muslim Council wrote that the Temple Mount’s “identity with the site of Solomon’s Temple is beyond dispute” and referred to the place as the location where the Prophet David (pbuh) extended peace offerings.[7] The fact that the Jews’ Holy Temple resides in Jerusalem is also mentioned in both the Torah and the Gospel many times. In these holy books this site is depicted as the place where the Prophets David, Solomon and Jesus [peace be upon them] walked, preached and prayed.

The connection between Jews, Jerusalem and the Temple Mount needs no further historical or archaeological proof. It lives on in the Arabic name for the city, Al Quds/Bayt al-Maqdis. Our responsibility as Muslims is to protect these holy sites, not just their structures but also their history and meaning to those who cherish them. More than that we must not let these politicized polemics drive a wedge between people who worship the same God. Attacks against Jews’ history have always been a precursor to attacks on their rights to live in the land of their forefathers and then on their right to live at all. Therefore, misinforming the young generation becomes a vehicle for incitement that has long paved the way for attacks on Israeli women and children.

There are 400 mosques in Israel, all protected by Israeli law, and the Israeli administration ensures that no Muslim receives unjust treatment under the law due to his faith. Israel allocated the Aqsa Mosque, Dome of the Rock and their environs to the Muslims, and handed the governing of the site to the Muslims. Now non-Muslims’ access to the site is curtailed. They can only visit on certain days and only for three hours. At times, Jewish and Christian visitors are harassed and assaulted. Non-Muslims are not even allowed to carry any kind of religious object or book, and they face detention for the mere act of moving their lips in silent prayer.

However, in every other part of the world – with a few notable exceptions – people from every religion are allowed to visit mosques and Muslim sacred places. Therefore, there is no reason whatsoever for them to be banned from the Haram al-Sharif in Jerusalem. The presence of a Jew who wants to pray in this place should in no way be seen as a provocation. On the contrary, it should be a blessing for Muslims to rejoice about. For instance, just like Christians and Jews may pray with Muslims in the Istanbul Sultan Ahmed Mosque, they should have the same right in the mosques of the Temple Mount. There is no religious obstacle to this. Mosques should be places that are free from political tensions and debate; they should be places where everyone remembers that they are equal subjects in the presence of God.

Regrettably, rumors led to riots and bloodshed in the Temple Mount – and in particular, to the stoning of Jewish worshipers at the Western Wall below – and have led to rigorous security precautions. Provocations and acts of violence often escalate during Jewish religious holidays. It is inarguably wrong to use religious holidays and sites as vehicles for incitement for acts of violence. No sane person can approve of filling places of worship with stones and small explosives, turning these holy places into barracks. Under no circumstances can the moral values of Islam justify throwing stones at people when they pray to God, let alone from a safe height of 20 meters. As a result, Israeli security is forced to respond, which leads to clashes.[8]

Just as there are provocateurs among people who participate in demonstrations, surely there are also individuals who are misled and whose religious feelings are misused. However, some media outlets use images of conflict in a manner that incites further hatred of the masses against the Jews and exploits Muslims’ sensitivities, almost trying to justify violence and certainly to excite and use outbursts of emotion for political ends. Therefore, our Muslim brothers should recognize the ploy and provocation and urge people to address disagreements with common sense.

The Al-Aqsa compound and its vicinity should be turned into a place where the beauties of Islam, free from political agendas, are shared with people of all religions. People should be “incited” to love and place faith in God, and not the opposite. The name of Al-Aqsa being associated with violence and conflict is something Muslims can prevent. When our Palestinian brothers turn a deaf ear to these incitements and do not allow our religion to be exploited for political revanchism, they will witness how security measures restricting their daily lives will be alleviated. Just as the border between the towns of Baarle-Nassau located in Holland and the Baarle-Hertog located in Belgium goes through cafés and houses, so can the border between Israel and Palestine become a line that will barely be felt. The primary action preventing this from happening is the culture of hatred nurtured by the inflammatory political statements, the false education system and the misleading press. Fences and barbed wires are not the cause of violence but their consequence.

Jerusalem’s history is that of prophets and revelation. It is against all reason and conscience to try to erase the past of its holy sites as war by other means. Attempting through political ploys to deny the 3,000-year-old intimate tie between Jews and Jerusalem, which was founded by the Prophet David (pbuh), is not how Muslims, who have internalized the moral values of the Qur’an, ought to behave.