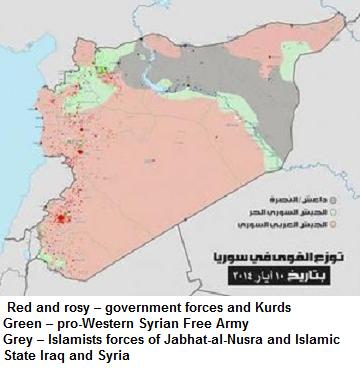 While the world attention is focused on Ukraine, the events in Syria may significantly affect the situation in the Middle East and the world. The forces of Bashar Assad have fully liberated Homs, the third largest city of the country with a population of one million where the uprising started around three years back. According to agreement, about two thousand militants with small arms left the city. They need to be armed to repel possible attacks by Islamic State Iraq and Syria (ISIS) forces which accuse them of treason. In return civilians held as hostages were freed and aid was allowed to get into besieged populated areas. After the agreement expired, the forces leaving the city were attacked by rockets. Many died along with the force commander Abade Rahman.

The two army brigades that liberated the city are expected to be re- deployed to the north where a decisive battle for Aleppo is going to start. The government forces are also successful in Eastern Guta, a Damascus suburb. They have recently received reinforcements from Qalamoun region where the government army has recently held a victory. There is a reason to believe that by the time of presidential election slated for July 3 the government regular forces will have their control established over the area where at least 85% of population lives. Washington has already said the expected victory of Bashar Assad, the leading candidate out of three hopefuls, will be illegitimate because the civil war is raging and the candidates don’t have equal chances. The US stance is not very convincing as it has already recognized as legitimate the presidential election to take place in Ukraine under more or less the same circumstances.

It’s not the only parallel between Syria and Ukraine. The big chessboard game makes them intertwined; no matter they are situated at large distance from each other. Experts believe that to large extent Washington has provoked the Ukrainian crisis trying to evade the humiliating defeat while playing the Syrian game. The Volgograd terror acts were traced to the Islamic militants in Syria (dislocated near Homs). Many expected Russia to intensify support of Damascus and even strike the perpetrators. If this version is correct, the anti-Russian forces coming to power in Kiev were to distract Moscow from what the West was doing to overthrow the Syrian regime, among other things. The planned scenario has totally failed.

The US cannot get a free hand in Syria taking advantage of Russia’s involvement in Ukraine. The strategic blunders have led to real zugzwang. Any large-scale intervention in Syria gives Russia an impetus to intensify its efforts in Ukraine. Direct involvement will entail increase of Russian aid to Bashar Assad. He needs much less for victory than the interim government in Kiev which has great expectations which neither the United States, nor Europe are ready to satisfy. French journalists write, «There is no sign the Bashar Assad’s regime in Damascus is going to fall. His victories are incredible and even the most perspicacious annalists fail to explain what has made him achieve such a success». French journalists say the United States evaded direct involvement because Assad was supported by Vladimir Putin.

Saudi Arabia and Qatar have made a «decisive mistake» being blinded by their hatred of the Syrian President. They provided funds for Al-Qaeda linked Islamic radical groups. The West ignored it but the world was very much aware of the fact. One more reason for Assad’s success was the failure to drive a wedge between those who were close to him and make his team split.

The Syrian leader is absolutely right when he repeats that the people were the decisive factor that influenced the events and made them unfold favorably for the government. People are tired of violence and different militant groups operating in the territory of their country. They believed that only those who rule the country today can establish peace, law and order. It’s important to note that after multiple cases of treason and loss of brothers-in-arms Bashar Assad surrounded himself by the people who are loyal and able to accomplish the most difficult missions. No matter great losses during the war, the Syrian military has become the staunchest and most effective force in the Middle East.

The White House could have honestly admitted the failure of its strategy in Syria and launch constructive talks on ultimate normalization of the situation in the war-torn country. Instead it continues attempts to stop the wheel of history which is out of its control. During the strategic battle for Qalamoun and fierce fighting for control of Homs, the United States and Turkey let a large opposition formation invade the Syrian province of Latakia. Now it is trying to launch a counter-offensive from the south. The mission is to prevent the liberation of Damascus suburbs and divert the government forces that have just held the victory in Homs so that they could not move to Aleppo.

For this purpose the United States has prepared a well-armed (including heavy weapons) group located near the Jordanian-Israeli-Syrian border junction. It comprises nine militias. At present the force is moving along the Israeli border to the Golan town of Quneitra to wrest it from the Syrian army, thereby removing one of its last points of access to the Israeli border. The plan of action is based on the assumption that the Syrian forces will avoid the use of artillery pieces because Israel may fire back. For the same reason Damascus will abstain from using aviation. Israeli air defenses may cover the militant forces.

The name of the operation is «Levant of the Prophet». Sounds false in view of Israeli collaboration with Islamists. At that the government forces have large reinforcements in the vicinity of central Damascus. This force can be used to counter the offensive. They have failed in Latakia and they’ll fail in Quneitra. The activities of militants and their Western supporters resemble death agony. They cannot change anything so the only thing they do is prolonging the suffering of people.

Analysts already make conjectures related to the would-be correlation of forces in the Middle East after the inevitable victory of Bashar Assad which is close. The forecasts are worrisome for Washington. The emerging axis Tehran-Bagdad-Damascus-Beirut is a nightmare and thanks to the awkward policies implemented by former President George Bush and incumbent President Barack Obama it is close to becoming a reality. They did their best to make it come true. By and large the White House behaves the same way in Ukraine. Its Ukrainian policy may also fail the same way.