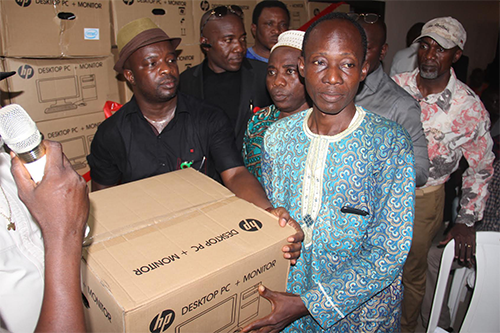 As part of activities marking his 100 days in office, Hon. Tony Nwulu, the lawmaker representing Oshodi/Isolo Federal Constituency II in the House of Representatives, on Wednesday donated buses to daily convey all public school students in his constituency to and from school free of charge.

The Peoples Democratic Party (PDP) lawmaker also donated hundreds of computers installed with educational software to all public secondary schools to aid in digital learning. Thousands of exercise books, pen and other educational materials for pupils in public primary school in the area were also donated.

The event which was simply organized but well attended took place Wednesday in Lagos at Ibis Royale Hotel, Airport Road, Lagos, and had in attendance traditional rulers Including Ezeigbo of Lagos ‘Igwe Nkpume’,  Ezeigbo of Isolo and other political leaders.

Beneficiaries of the computers are 32 public secondary schools in his constituency.

News24 Extra reports that the donations were part of Nwulu’s campaign promises to Improve on the quality of education by ensuring pupils and students are provided with adequate and up to date educational materials to prepare them tackle the challenges of the digital era.

Mr Femi Afolabi, a constituent who spoke to News24 Extra at the venue said “For the first time in the history of our constituency, we have somebody truly representing us”

”It is no longer ‘the winner takes it all’ as usual, Hon. Nwulu is now performing beyond our expectations, when he was campaigning and making these promises we thought they were just the usual ‘sweet mouth’ our politicians use, but when I heard about Hon.Tony Nwulu’s hospital visit a month or two ago, it was like our hopes rekindled. Though I did not benefit directly from that hospital visit, but my immediate neighbour did. My neighbour said the honourable paid all his wife’s medical bills that include operation and drugs. I was short of words when he said according to his wife the honourable paid medical bills of everyone in the prenatal and postnatal wards of the hospital. So when I heard he would have his 100 days in office ceremony here today (Wednesday), I said I must not miss it”  he said.

Mr. Sunday Olaifa, the Isolo PDP Chairman in his statement said, Hon. Nwulu is a rare Gem, “His good deeds have rewarded him the position he is in today. He further explained how Nwulu purposely contested to liberate the people of Oshodi/Isolo Federal Constituency II from the political bondage which they helplessly found themselves in the past 15years. I’m happy that our people have now been liberated, what is happening now is first of its kind in our constituency and to this I’m most impressed and happy.” 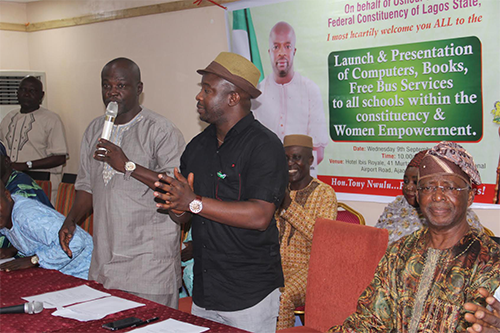 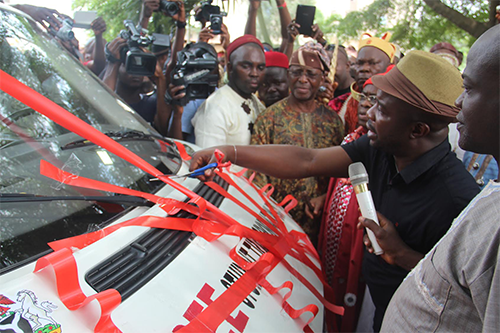 Dr. Frederick Fasehun, leader of Oodua Peoples Congress who was present at the event said he is happy and proud that the Peoples Democratic Party (PDP) gave Tony Nwulu, an Igbo man this opportunity which has paid off and now the real change has come to this constituency. People are tired of wealth of promises without action, but as seen here today, Hon. Nwulu backs his promises with action.

In his speech, Hon. Tony Nwulu said ” When I talk to people, there seem to be a common norm about leadership, especially in governance, it is believed that when people get elected or occupy juicy positions they serve their own interests and utterly forget the masses that got them into such positions. Exhibiting certain characters or traits like being authentic, having a good reputation, being ethical in behavior, willingness to listen, ability to communicate, being optimistic and many more are pointers to good leadership. Giving account of stewardship is one key trait amongst the many traits a good and ready to deliver leader must possess. A good leader must show to his people that he has them at heart by giving account of his stewardship to the masses that stood under the sun and the rain to get such leader elected. A good leader thinks outside the box for viable areas where her people can be directly affected by governance, these kind of leader is what the masses call “the man of the people” he said.

He further disclosed that the day’s gathering was not a party’s affair, rather a political event; according to him “this is me coming back to my constituency to give back to the constituents and give account of stewardship” this is in keeping to the transparency pact with my constituents.

He lamented about the infrastructural deficits in many constituencies, he however, challenged legislators to come out and help their constituents in their respective constitueExtendfing extending dividends of democracy to them. According to him, the problem with Nigeria is not making laws or raising questions but implementation of these laws and accessing what has been judiciously done to the question that has already been raised is the main issue. He said he has refrained from making laws but would definitely do that when necessary, “the National assembly is currently on recess, but I will not rest until I have done the will of my people who came under the sun and rain to vote for me”.

He said he will not be waiting to get funds from the federal government  before doing the things he wants to do for his constituency, and this made him go all out soliciting for funds from friends and associates to assist his constituency. In his words, “am not interested in their money but would encourage them to come build infrastructures in my constituency”

Nwulu also expressed readiness to bring to life few amenities already on ground, cited an analysis of a bore hole. According to him, it’s a useless effort digging a new bore hole instead of ensuring that the ones that were readily available are functional.

Talking about his achievements he said “some of the achievements amongst many others that I have been able to attain within my 100 days as a legislator includes:

HEALTH: It is my passion to help save lives, salvage the sick and help the aged in the hospitals. I was praying and saw the picture of a woman in the general hospital who was in a sorry state and could not pay for her medical bills; this prompted me to go to the Isolo General Hospital where I gave out numerous donations running into millions to well over 100 patients believing that the woman I saw in my dream would be among them.

Talking about his experience at Isolo general hospital and touching situations that made him cry. Female patients abandoned at the hospital by their husbands due to one medical condition or the other are suffering, patients that are in between life and death, he said “there was a certain woman who could not breast feed her baby because of #75,000, she was not allowed to breast feed her baby because she has Hepatitis B and could not afford to pay for the injection needed for the treatment before she could breast feed her new baby.”

After my visit to the Isolo general hospital, I went home happy and certified that I have done as God directed.

SCHOOL AND STUDENT ENCOURAGEMENT. He said, I have done alot in the area of education and today I’m donating buses to ease off transportation challenges for all public schools students. I have also donated hundreds of computers to all public secondary schools in the constituency to aid digital learning as well as exercise books to all primary schools.

In addition “I’m presently in talks with a school in Norway to see how they could help out in scholarship programs for students in my constituency.” He said.

The honorable promises to do more for the people of his constituency, reiterating that he would certainly keep to his words like he has always done.

For the youths, he said he believes in empowerment of the youths noting that once the younger ones are empowered, the effects will be felt in the productive economy, “it is better to empower than run a government where cash will be distributed to people as this style will further pauperize them.”. He concluded.