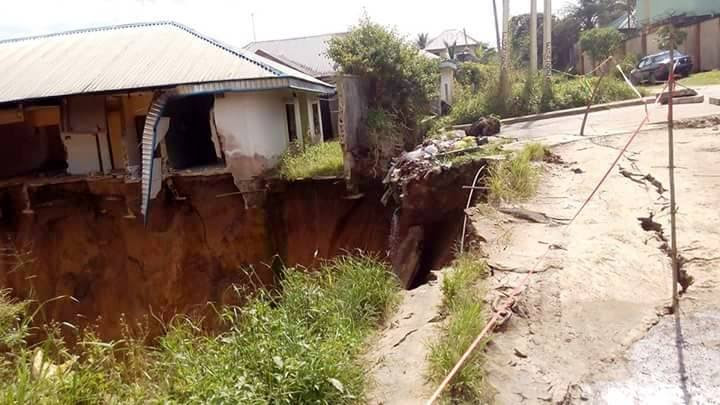 A RAVINE with a seeming voracious appetite, is busy sacking a section of Calabar, the Cross River State capital. The obviously helpless residents have cried out to the authorities, saying the disaster of nature is threatening their lives.

It is however, suspected that the huge ravine may be caused by erosion. Residents in Parliamentary and Akai Effa axis of Calabar are vulnerable to this problem. A resident of the area said “somebody, anybody, Ayade Media Team should tag this photos to HE (His Excellency), you were not just made a media team to attack those who criticize the governor and his administration, but also to bring to his notice, issues of utmost attention.

“This is a ravine that cuts off Parliamentary and Akai Effa behind God’s Heritage centre. This particular tarred road you are viewing is the road opposite women development centre, Parliamentary junction, where the former Speaker Larry Odey lives, a certain lady called Ikwo Minimah, Obeten Okorn (the few I know around there) have houses on this road called Etim Edet crescent.

“The untarred road off the crescent is the entrance leading to my abode from where I go in and out in pursuit of my daily bread. Now I will be forced to take a leave of absence from my job till whenever, if the crack finally caves in and movement is impeded; except governor Ayade in his benevolence will decide to give up his chopper to be airlifting me to my place of work.

“Seriously, I use this medium to draw attention of government to this area, it has now become an SOS call before other houses will cave in. With this morning rains, I wonder what will become of the crack upon my return from work. I will keep you posted. Meanwhile, say a prayer, request a mass, do intercessory prayers for me that I and my kids do not become Internally Displaced Persons (IDP’s).