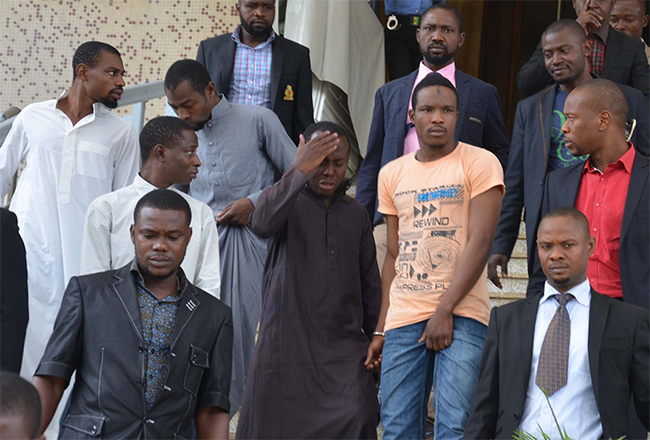 •Narrates how he was indoctrinated
•Says we robbed banks, used the loot for ‘Jihad’

With the recent arrest of five suspected members of the deadly Boko Haram sect, terrorizing the metropolis of the Federal Capital Territory, FCT, Abuja, the police seem to have been on the verge of dismantling the deadly cell which has coordinated most of the bombings around the metropolis.

Saturday Vanguard gathered that the newly established Special Intelligence Response Team, SIRT, an elite unit of the Nigeria Police Force, designed by the Inspector General Police, Solomon Arase, to combat terrorism , armed robbery, kidnapping and various violent, launched a massive onslaught on the Abuja cell, leading to the arrest of five suspected members of the cell, while several IEDS, laptop and IED materials were recovered.

Investigations by Saturday Vanguard indicated that, the arrest of these suspects and the subsequent recoveries and of IEDs and it materials, have since thrown members of the cell, who are mainly natives of Igbira in Okene area of Kogi State, into disarray. We gathered that the development, which is currently, not just flushing out members of the cell from Abuja, has also sent sympathizers of the sect into panic.

Security sources, who spoke Saturday Vanguard in Okene, Kogi State, on the condition of anonymity as they were not authorize to speak on the matter, disclosed that several member of the cell, based in Abuja are returning in their droves to Okene, adding that some of the suspects were arrested, while others have been forced to escape and relocate to neighboring states.

However, sources at the Force Headquarters Abuja, disclosed that the operation to effectively dismantle the Boko Haram, from Okene Kogi State, operating in Abuja, became imperative after the multiple bomb attacks on Kuje police Station and Nyaya areas of Abuja.

Saturday Vanguard gathered that the exhibits and intelligence gathered from the scene of the explosion, were transferred to the highly trained operatives SIRT deployed by the IGP to apprehend the culprit. It was gathered that, the operatives from SIRT, trailed two of the suspects, identified as Abdulazeez Muhazab and Ishiaka Salihu, to a house in Karmajiri, behind Military Area, Cemetery, off Airport Road, Abuja, recovering several explosives, detonators, chemicals in both liquid and powder form used for making bombs and several other ready made bombs. The suspects also, mentioned one Haulaki in military custody and one Hamza, as their leaders in Abuja.

Saturday Vanguard further gathered that Haulaki, who is also known as, Abdulwaheed Nasiru, was handed over to the police and during interrogations, he confessed and disclosed the addresses of three houses within Abuja and Suleija Niger State, where they produced and store explosives. The operatives and on the strength of this confession, proceeded to Gauaraka area in Suleja, Niger State, Iddo Village off Airport road, Abuja and at Dan Asato area of Suleja, where five ready made IEDS, Chemicals used for bomb making, detonator, HP laptop, two books on several chemicals and engineering materials, An Ipad, loaded with IED, plate number of a car, scale, digital multimeter and a knife were recovered. It was gathered that the Haulaki, also led the operatives to Galadima area where tangible information were gathered.

When Saturday Vanguard, interviewed, Haulaki, he confessed that he was a native of Okene, Kogi State.

“I am married and my wife is currently pregnant. I had just primary education which I did not finish. I am an Igbira man and my people are mainly Muslims. I came to Abuja seven years ago to learn auto mechanic at Games Village and I graduated four years after, before establishing my own workshop at Galadimawa Roundabout.

“In 2013, I joined the Boko Haram, there is the mosque along the road before Total Fillings Station, in Aiyoke area of Okene, Kogi State. Though I rented an apartment very close to the mosque and one of the sons of the landlord of that house, who is my friend, Abubakar, who was killed during operation visited that mosque and he introduced me to the Imam and the owner of the mosque, Mustapha who is currently in the custody of security agents.

“Mustapha was the one who indoctrinated me into the Boko Haram sect. He urged me through his teachings which were mainly on Fridays after the Jumat prayers, Saturdays and Sundays to be faithful to God and do his wishes and I should also oppose those going against the teachings of Prophet Muhammed.

“Mustapha usually urged us to support the cause of Jihad in the North Eastern part of the country in any way we can and when we cannot donate ourselves or money to the cause, we should at least pray for those waging the war. In some of his teachings, he told us that western education was a sin and working for the government was also a sin. He then asked those who have gone through secondary and university education to destroy their certificate.

“A lot of people, who were graduates from the secondary and university in that mosque, destroyed their certificates. That singular gesture endeared me to the sect. Aside Abubakar, I met some other young men, like , Usman , Abduljalal, Abu Hamza, Bilal and Haron.

“These men were highly devoted to the course and they told me that they usually rob unbelievers and use the money to support the course. Abu Hamza is our leader and also one of the bomb manufacturer. He was the one who led us to rob two banks in Owo, Ondo State and Okene in Kogi State, and it is through that means that he raised money for bomb materials and others.

“He was the one who also thought Usman how to make the bombs. I am a very good driver and my duty is to drive vehicles to various destinations. I usually don’t ask if there is bomb in those vehicles or not all I do is to follow instruction.

“A few months ago, some security agents came from Kaduna and arrested Abu Hamza and took him away. Few days to the Sallah, Usman was also arrested in Abuja and I got instructions from very senior members of our sect to move all the ready made bombs and the materials out of Usman’s house in Suleja and I moved them to my brother’s house who is also a member of our sect at Iddo area of Abuja.

“I also gave, two Ak-47 rifles and some bombs to a senior member, Abu Husssien who took them to Okene, Kogi State. Few days before the last sallah some vigilante men arrested and handed me over to the military intelligence who detained and later handed me over to the police special team. I regret joining the Boko Haram Sect,” he lamented.