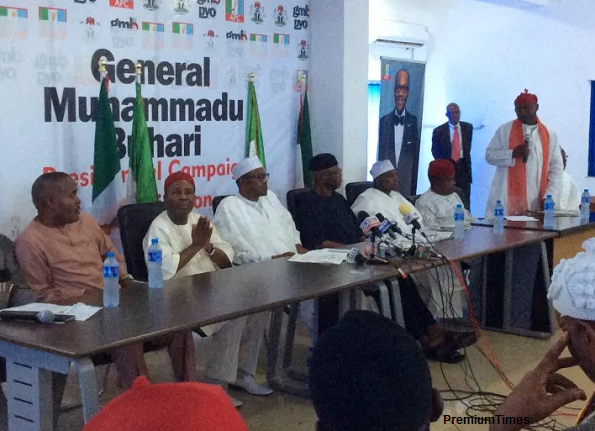 A socio-cultural organization, Igbo Delegates Assembly, has thrown their weight behind the candidate of the All Progressives Congress, APC, Muhammadu Buhari, in the March 28 presidential election.

Speaking at the Buhari campaign office in Abuja Friday, President General of the group, which comprise of Igbo’s living in the northern part of Nigeria, Sam Enyama, described Mr. Buhari as a man of impeccable character and urged people of the south east to downplay any religious and tribal sentiments in the coming polls and vote for him.

He said a Buhari presidency would address the pressing needs of all the regions.

The Eze’udo of the 19 northern state, Uche Egenti, said as Igbos who lived in the north for many years, they know Mr. Buhari and what he stands for.

“We are here to support your aspiration to become the president of this country,” he said. “We know you, it is easier to work with you because of what you stand for. We are not ready to be plunged into another civil war and we are pleading with you to help us organize Nigeria again. We want discipline to reign again.

“We want to plead with you to help galvanized Nigeria once more, let the discipline rain again in Nigeria, let the polity be sensitized.

“A lot of people have complained that the issue about you is religion but we know you are not a religious bigot. You are a very firm, articulated officer of the Nigerian army. In 1983 when Nigeria was at a verge of collapse, you came in and rescue it.”

He also said the group was in full support of the use of the permanent voters’ card, because it would enhance decency in the polity and bring credibility to the election.

“We are here to let you know that the Igbos are behind you,” he said.

Responding, Mr. Buhari thanked the group for the visit and endorsement.

He said their faith in him would not be in vain.

“I assure you, APC will not disappoint you,” he pledged.

He also said the meeting was important for him because it involved a group with lot of experience regarding crisis in the country, having been personally affected one way or the other.

“I could recall the good old days, when it is Christmas and New Year, virtually, all businesses closed shop in the north especially in Kano until the Igbos come back and then the businesses will pick up again,” he said.

The former Head of State also recalled that many Igbos who left the north during the Civil war, came back after and found most of their property intact.

“Wherever Igbos have property in a town, there were committees in the respective towns, the property were repaired and given for rent, while an account was opened for them,” he said. “After the war, the Igbos that survived came back and claimed their property and the savings made from the rent.”

Mr. Buhari said the civil service made all of that possible, adding “I thank the civil servants of those good old days because the committees were developed with very clear and firm terms of reference and properties belonging to the Igbos were looked after and they claimed them back. I think they did well.”

Why I joined politics

Mr. Buhari also went down memory lane recounting all the offices he held both in the military and outside.

He also recalled having spent 20 months in detention

He said two reasons made him join politics.

Firstly, he narrated how after his regime was overthrown and he was jailed, people kept coming to see him in numbers, which prompted him to give politicking a thought.

“I was sitting at home after I got out of detention and thought people will leave me alone,” he said. “I didn’t even build a filling station, not to talk of owning an oil block and so I thought I have lost their sympathy.

“But they kept coming to me and there was nothing I could do and then I speculated that maybe when I get into partisan politics, I will get into a position to be heard.”

He also said another incident was the collapse of the former Soviet Union in 1991 in spite of its nuclear arsenal, which was greater than Nato’s and superior social programme.

“It just collapsed and people just went home; suddenly there are 18 Republics in the old Soviet Union,” he said. “That was when I decided that the best form of governance is multi party democratic system with a big proviso that elections must be free and fair. Otherwise, the whole thing will be a sham. It is in pursuit of that that I am on my fourth attempt to get the highest office in the land.

“In the first three attempts, I ended up at the Supreme Court because I believe in the system. There is no point believing in a system and conducting yourself haphazardly.

“I fill fulfilled because when I decided to join politics in April 2002, I joined APP even though there was PDP and they were in government. But I went into the opposition even though there were governors, senators, members of the House of Representatives in the party, but the following year, they gave me the ticket and what did I do with the ticket? I got the late Chuba Okadigbo to be my running mate and by that, I blew the mind of people about my tribal or religious position.

“In 2007, I picked Chief Ume Ezeoke and again, he was Igbo, so, I dispel any question about my being a religious bigot or a tribalist. Later on, I picked Pastor Bakare and now, I am running with a Pastor, Osinbajo. The issue of religion has been taken into account in this country, but then, it is what human beings are worth in politics that they may be able to earn the efforts they are putting in.”