Nigeria has fallen under Marshall law as the military has taken over cities. Military vehicles are being observed driving through major “opposition”  cities including Lagos, Kaduna, Abuja, Sokoto and northeast.

The loaded trucks have been blasting their sirens to “intimidate” the populace. In Yobe fighter jets have been flying low in very intimidating style. 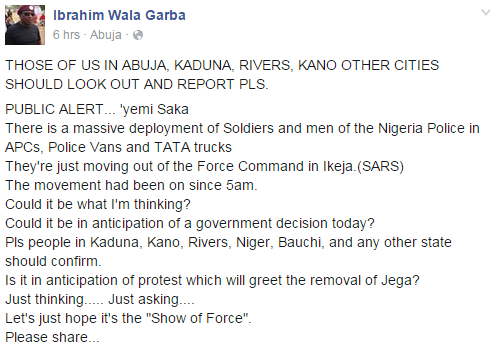 Experts say that Marshal force represents the military coup in action. The coup as described by civil right lawyer Femi Falana and activist Dr Peregrino Brimah was initiated on February 7th when the military first came out and forced INEC to postpone the elections to deprive the winner, Buhari/Osinbajo of their victory while imposing their candidate on Nigeria. It was a stage-wise and not instantaneous coup. The military were then drafted across major cities ahead of the INEC announcement in anticipation of people’s angry reaction.

This marshal force is again being used as intimidation in imposition of military imposed rule on Nigeria and dictatorial choices as regards INEC, the possible sack of its chair, Jega and other expected processes of the democratic subversion and imposition of the military chiefs and their candidate incumbent Goodluck Jonathan.