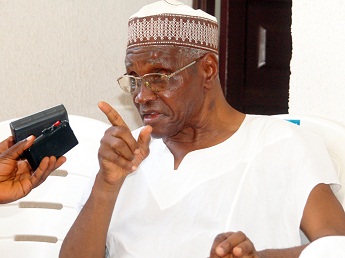 The Spokesman of the Northern Elders Forum (NEF), Professor Ango Abdullahi, was Wednesday shot by some soldiers in Bauchi on his way to Gadau, reports have said.

The former Vice Chancellor of Ahmadu Bello University (ABU), Zaria, was attacked when his driver overtook a military convoy.

Speaking to newsmen in Bauchi, yesterday, Professor Abdullahi said he was on his way for an official assignment at Bauchi State University, Gadau, where he is the chairman of the university’s governing council when the incident happened.

“It was in the morning as I was travelling in my official car with my driver. I was going to Gadau for a meeting. We had just passed the Awala Hotel roundabout when I saw a military convoy moving very slowly.

“I was trying to catch up for the meeting, so my driver overtook the military convoy. The next thing I knew they opened fire at us, with bullets were sprayed on the car.

“The bullets damaged the engine of the car, damaged the car that we had to park by the road side. The soldiers came out and were shouting angrily at us.

“They were demanding to know why we wanted to overtake them, asking if we didn’t know that the soldiers were exporting sensitive materials,” he said.

He lamented that the soldiers, even after the incident, the soldiers just kept going. “I have never seen such a reckless act.”