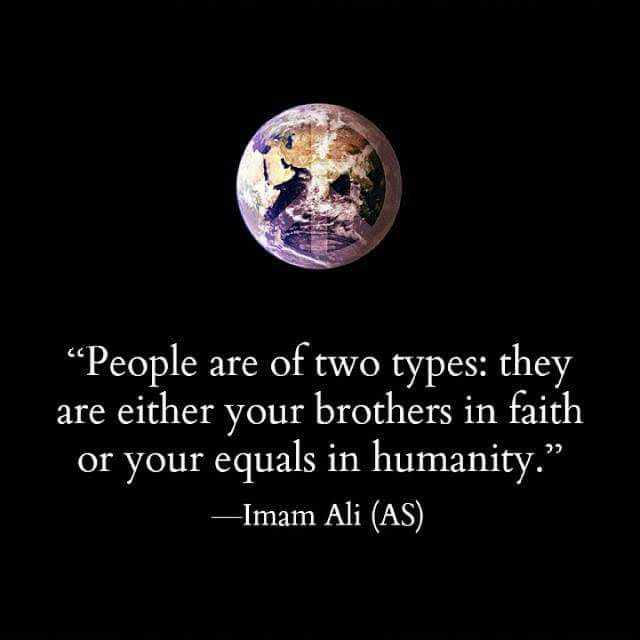 “People are of two types:they are either your brothers in faith or your equals in humanity.” -Imam Ali (as)

This is One of the most important words of Imam Ali (as). When Imam Ali (as) sent his Supreme military commander, Malik Al-Ashtar (ra) as the Governor of Egypt after the Martyrdom of Muhammad Ibn Abubakar (ra) he wrote a famous letter to him advising him about good governance, respect for human Rights and justice in government. The late Nigerian Chief SundayAwoniyi, a Christian, once declared that since human creation there is no better document on good governance than this letter.

World Monotheist religions of Islam, Christianity and Judaism all considered Adam (as) and Eve (as) as the source of humanity. That means all of us descended from them. That means at a certain point of existence our ancestors met in lineage as brothers, sisters, uncles, aunties, nephews etc. The proper concept of humanity is to consider all Human as brothers and sisters in creation. Such understanding will defeat the evil manifestation of racism and tribal superiority.

One of the causes of murderous Wahhabi terrorism is excommunication of Muslims out of Islam. All murderous terrorism in the name of Islam are inspired by deviant Wahhabism. These murderous savages think they should kill all those who do not subscribe to their deviant and bloodthirsty interpretation of Islam. The adherents of this deviant sect considered all Muslims who do not subscribe to their extremism and deviations as “Kafir”. Murderous terrorist Groups such as #ISIS, #AlQaeda, #BokoHaram etc are all inspired by the terrorism-enabled Wahhabism.

If all Muslims should abide by these famous words of Imam Ali (as) words then there will never be murderous terrorism in the name of Islam. If you consider Christians, Jews, Hindus, Buddhist etc as your brothers and sisters in humanity they how will you kill innocent people and dumped their dead bodies in mass graves? And if all the murderous greedy colonialists considered others as brothers and sisters in humanity then they will not steal the resources of others and commit heinous genocide to erase a race from a place.

“There is a great misunderstanding about the word ‘#kafir’. Literally, ‘#kafir’ means one who #refuses. Generally, people take it as an equivalent of non-Muslim. This is incorrect. To think that those who are not Muslims are kafir is a wrong notion. According to Islam, everyone is simply ‘#insaan’ or human being. There are hundreds of times when the Quran addresses people with words such as ‘an-naas’ or ‘#al-insan’. So, everyone is basically a human being.

The Prophet of Islam was born in Mecca and then migrated to Medina. At that time there were some #Jewish tribes in Medina. One day the Prophet saw a funeral procession passing through a street in Medina. The #Prophet was seated at that time. On seeing the funeral, he stood up in respect. One of his companions said, ‘#O Prophet he was a Jew, not a Muslim.’ The Prophet replied: ‘#Was he not a human being?’ Thus the Prophet discovered a commonality between himself and the non-Muslim. This is the true spirit of Islam.”

A student of the Nigerian Islamic scholar Sheikh Ibraheem Zakzaky once asked the scholar as why do the Islamic Movement in Nigeria (IMN) always invite Christians to its programs. Sheikh Zakzaky replied that we invite them to our programs since we are all brothers and sisters in humanity and for mutual respect and peaceful coexistence. This same Sheikh Zakzaky is today under illegal detention incommunicado by the Nigerian government despite an order by a competent Nigerian Court to free him and his wife. President Buhari sent the Nigerian army in December 2015 to Zaria where they brutally slaughtered 1000+ innocent Nigerians who were followers of Sheikh Zakzaky and wickedly dumped their dead bodies in mass graves at night to bury evidences.

On a final note, it is important that we consider all sections of humanity as brothers and sisters in creation and to feel the pains and sufferings of all humanity.