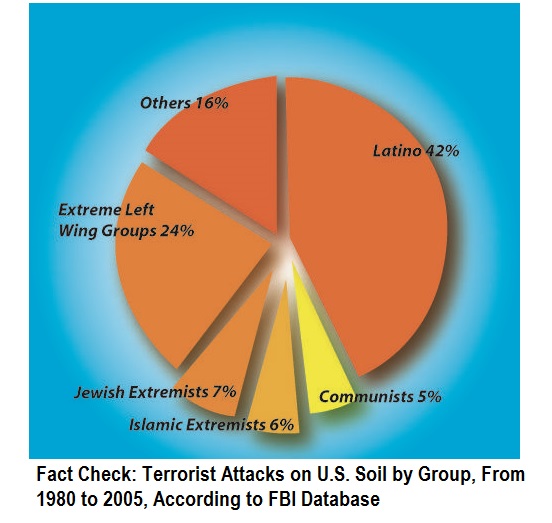 Going viral on the internet is a re-circulation of a US comedian, Jon Stewart show that shows clearly how the New World order, NWO media carefully crafts propaganda of terror attacks to spur up sentiment ahead of attacks on Arab and Muslim nations in the current cold-hot hegemonists war.

In an embarrassing video Jon Stewart carefully laid out how acts of terror are presented to either stir Islamophobia or to exonerate Christian and other faithful terrorists of religious connection.

Data that has been circulating on the non main stream media has illustrated that in spite of global propaganda, Islamic terror events are actually less than 2% in Europe and America of all terror events.

SEE: Europol Report: All Terrorists are Muslims…Except the 99.6% that Aren’t

SEE: US Data: All Terrorists are Muslims…Except the 94% that Aren’t

SEE: Are All Terrorists Muslims? Far From It– By DailyBeast

SEE: Less Than 2% Of Terrorist Attacks In Europe Are Religiously Motivated Including Muslim – EuroPol

The video is more than telling: it clearly illustrates a thoroughly scripted campaign of calumny that ends with the dropping of bombs by the western world in a new war against Africa and the Middle East.

In the video Jon Stewart plays clips that show how US news anchors denied Anders Brevick, the 2011 Norway murderer of 77 children, was Christian despite him saying he was and his manifesto carrying several crucifix images including one on its cover, and being all about “restoring Christianity.”

France has begun to announce plans of intervention in the Middle East.

The Paris attacks surprisingly immediately yielded an almost obviously pre-scripted series of responses form the minute it happened, including the auspicious hashtag #IAmCharlie that earned the Pope’s “punch” rebuke.

Coincidentally, though the masked Charlie Hebdo attackers who were visibly more professional than to ridiculously forget their ID in the getaway car were adopted by a so-called Yemeni al Qaeda/Aqim leader; the second attack that week in Paris was by a black man who had allegedly sworn to ISIS. These two groups are known rivals. Why did they stage their attacks the same period?

Coincidentally again, Belgium suddenly made a deadly raid on suspected terrorists right the same time to ensure the fear of Muslims is well cemented and not ignored , experts say.

Apparently, US president Barrack Obama skipping the event was not without reason. He has been in uncomfortable and exposing positions quite too often recently.

Not being mentioned in the main stream media as raised by former US congressman Ron Paul is the fact that a fourth suspect in France turned himself in quickly and publicly saying he did so for fear he will be killed to rope him in.

The global leaders feigning hypocritical concern were further exposed for ignoring the murder of 2500 Nigerians in a Muslim community by the same radicalists the same week of the Paris shootings. This pointing to a deliberate conspiracy. Apparently the Nigerian massacre of holocaust proportions peed them off as it was serious wrong timing by Boko Haram.

Nigerian activists have however refused to allow the world forget the horrific events of Nigeria, the most deadly act of terror this decade.