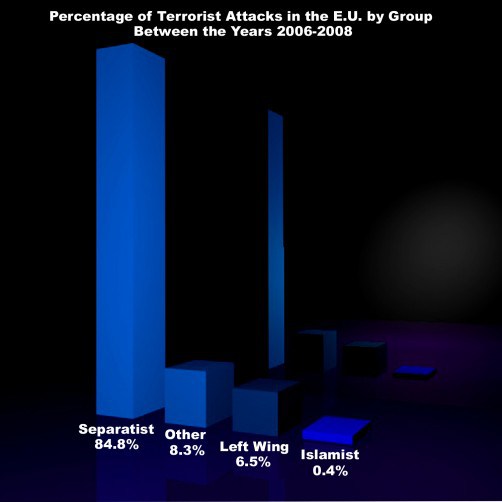 Islamophobes have been popularizing the claim that “not all Muslims are terrorists, but (nearly) all terrorists are Muslims.”  Despite this idea becoming axiomatic in some circles, it is quite simply not factual.  In my previous article entitled “All Terrorists are Muslims…Except the 94% that Aren’t”, I used official FBI records to show that only 6% of terrorist attacks on U.S. soil from 1980 to 2005 were carried out by Islamic extremists.  The remaining 94% were from other groups (42% from Latinos, 24% from extreme left wing groups, 7% from extremist Jews, 5% from communists, and 16% from all other groups).

But what about across the pond?  The data gathered by Europol strengthens my argument even further. (hat tip: Koppe)  Europol publishes an annual report entitled EU Terrorism Situation and Trend Report.  On their official website, you can access the reports from 2007, 2008, and2009.  (If anyone can find the reports from earlier than that, please let me know so we can include those as well.)

The results are stark, and prove decisively that not all terrorists are Muslims.  In fact, a whopping 99.6% of terrorist attacks in Europe were by non-Muslim groups; a good 84.8% of attacks were from separatist groups completely unrelated to Islam.  Leftist groups accounted for over sixteen times as much terrorism as radical Islamic groups.  Only a measly 0.4% of terrorist attacks from 2006 to 2008 could be attributed to extremist Muslims.

Here are the official tables provided in the reports…

(According to the report, there was 1 “Islamist attack” in the UK in 2008, which was omitted in the table above.  It has been included in the bar graph below.)

Just glancing at those tables is enough to know how absurd it is to claim that “all terrorists are Muslims.”  That statement is nowhere near the truth.  If we compile the data, it comes out to this:

Perception is not reality.  Due to the right wing’s influence and propaganda, people mistakenly think that Islamic terrorism is the greatest threat to the Western world.  It is even a commonly held belief that Islamic terrorism poses an existential threat–that the very survival of the Western world is at stake.  Of course, the reality is that there are other groups that engage in terrorism on a much larger scale, yet these terrorist incidents are minimized.  Acts of terrorism committed by Muslims are purposefully sensationalized and focused upon, culminating in the idea that “(nearly) all terrorists are Muslims.”

Terrorism from Islamic extremists is certainly a cause for concern, but it need not be an issue that creates mass hysteria.  Nor should it be allowed to be such a critical issue that we are willing to sacrifice our ideals or civil rights for fear of it.  Neither should we be reduced to a status of absolute sissitude.  We have analyzed data from America and Europe (a good portion of the entire Western world), and the threat from Islamic terrorism is much more minimal than commonly assumed; in the U.S., it accounts for 6% of terrorist attacks, and in Europe not even half of a percent.

It is only through sensationalism and fear mongering that the topic of Islamic terrorism is allowed to be used to demonize a religious community that happens to be a minority in the West.  When confronted by such lunacy, we ought to respond with the facts and the truth.

In a future article, we shall analyze the data for terrorism on the world stage in order to further strengthen our argument