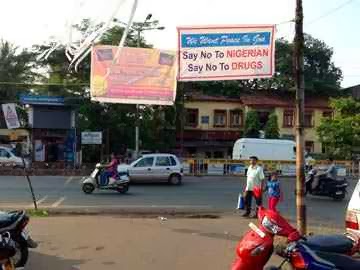 Panaji: The dissent among Goans against Nigerians in the tiny state continues to rise despite the arrest of one person in connection with the murder of an African national.

The murder of Obodo Uzoma Simon, who was stabbed to death in a north Goa village last Wednesday, sparked off unrest and triggered a diplomatic tussle between the African nation and India. Police on Wednesday arrested Surendra Pol from Chapora, a village 30 km from the state capital, and a notorious hub of narcotics activity. Pol was remanded in police custody for 10 days.

However, a backlash against the Nigerian community in the state continues.

Provocative banners reading “We want peace in Goa. Say no to Nigerian. Say no to drugs” have been put up across the state.

Late Tuesday, the village of Parra, a popular residential hub for Nigerians in north Goa, passed a resolution at a specially convened meeting of panchayat banning the renting of rooms and houses to Nigerians on a student visa.

Sarpanch of the village Delilah Lobo said the decision was taken after it was found that most Nigerians “faked students visas” to stay in Goa and peddle drugs.

Sioliom-Sodiem, a coastal village, has already passed a resolution demanding that Nigerians staying on rent within the village’s jurisdiction should be asked to leave.

The Goa government has already ordered a crackdown on all foreigners living in this tourism hub after a bitter clash between a mob of over 200 Nigerians on one side and police and locals on the other.

The Nigerians, who were protesting the murder of one of the compatriots, last Thursday blocked National Highway 17 for several hours, demanding the presence of Nigerian consular officials for the autopsy proceedings.

During the clashes, the Nigerians not only smashed a police hearse, but also dumped the corpse in the middle of the road blocking all traffic.

They later snatched lathis from intimidated policemen who were mute spectators and began to threaten local people as well as policemen themselves for a couple of hours. Over 50 Nigerians were arrested following the violence.

Chief Minister Manohar Parrikar later claimed that the murder was a result of a war between two narcotics gangs. The Nigerians said that their fellow national was murdered by the local drug mafia which had the sympathies of the ruling dispensation.

Parrikar has also said that all Nigerians with fake papers would be deported soon.

The action against Nigerians has also resulted in several ruling legislators referring to them as “wild animals” and even equating them with “cancer”.

Specific targeting of Nigerians has caused uproar in the diplomatic circles with the Nigerian High Commission in India claiming that the treatment was demeaning, and demanding an urgent stop to the harassment of their nationals.

Police suggest that the crackdown on Nigerians would tweak the narcotics industry in Goa, with one of the major drug mafias run by the Nigerians now on the backfoot.