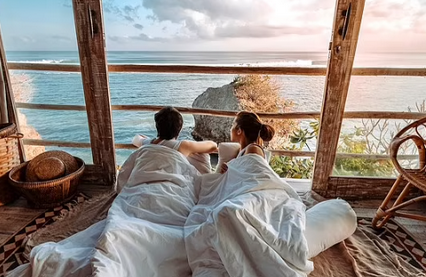 Over fears that new laws prohibiting sex outside of marriage would destroy the country’s tourism industry, Indonesia has confirmed that tourists will not be prosecuted.

Last week, the Southeast Asian country’s parliament passed legislation authorizing up to a year in prison for anyone caught having sex outside of marriage, as well as six months in prison for cohabitation by unmarried couples.

Officials say the law is intended to protect ‘Indonesian values’ in the world’s largest Muslim-majority country.

However, businesses have expressed concern about the new law, warning that it will harm tourism in Indonesia, which received over 16 million visitors in 2019.

On Monday, December 12, Indonesian officials appeared to backtrack in an attempt to allay tourism fears. Foreigners will not be prosecuted under the new law, according to Deputy Law and Human Rights Minister Edward Omar Sharif Hiariej.

‘I would like to emphasize to foreign tourists that they should come to Indonesia because they will not be charged with this article,’ Hiariej told reporters.

Extramarital sex and cohabitation would only be prosecuted if a spouse, parent, or child reported it, while adultery had already been made illegal under the previous criminal code for years.

Governor Wayan Koster of Bali, a popular tourist destination, also attempted to allay concerns about the law, stating that local authorities would not inquire about tourists’ marital status.

In a statement, he stated that Bali would not make any “policy changes” in response to the new criminal code.

‘Bali is Bali as usual, which is comfortable and safe to visit,’ according to Koster.

‘No checks on marital status will be conducted at any tourism accommodation… nor will inspections by public officials or community groups be conducted.’

Wayan also denied ‘hoax’ reports of flight and hotel room cancellations, adding that data from travel agents, tour and accommodation operators, and airlines showed an increase in the number of people planning to visit Bali from December 2022 to March 2023.