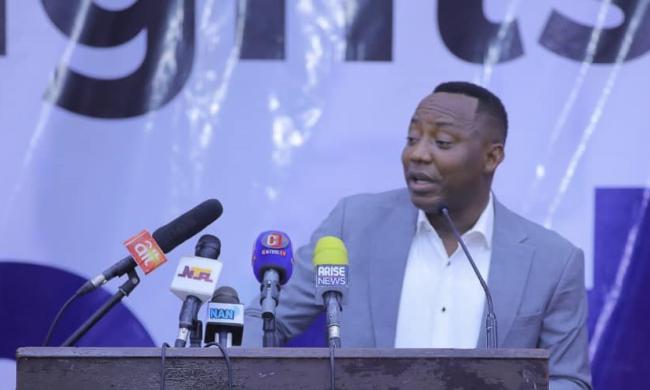 On Tuesday, Sowore stated that Abubakar Malami, the Attorney-General of the Federation and Minister of Justice, and Emefiele had conspired to hide “this massive corruption.”

On Tuesday, Sowore stated that Abubakar Malami, the Attorney-General of the Federation and Minister of Justice, and Emefiele had conspired to hide “this massive corruption.”

Gudaji Kazaure, a Jigawa member of the House of Representatives, accused Emefiele of trying to hide information on the collecting of the contentious N89.09 trillion Stamp Duty funds in a video that went viral online.

The lawmaker further said that access to submit the preliminary report of a committee formed by President Muhammadu Buhari to inquire into the alleged stamp duty payments being withheld by the CBN under Emefiele was purposefully denied to him.

Additionally, Kazaure urged President Buhari to either grant him permission to give his findings to him or to immediately initiate a comprehensive probe into the suspected misuse of stamp duty funds.

Kazaure’s Committee was branded by the president as illegal and disbanded on the orders of Mr. President by Malam Garba Shehu, Senior Special Assistant on Media and Publicity to President Buhari.

“The total net value of the country’s financial sector, the assets of the banking sector taken together are not worth N50 trillion, not to mention the amount of money he is talking about,” Shehu claimed.

In response, Sowore listed five pressing national financial issues that the allegedly misappropriated N89.09 Stamp Duty funds could address. He also expressed regret that the majority of Nigerians and the Nigerian media remained silent on the issue.

This was notwithstanding Kazaure’s admission that the CBN governor was detained by the Department of State Services but released on bail because of a heart condition.

“The Stamp Duty Scam is probably the largest financial fraud to have occurred in Nigeria recently. It was committed by President Muhammadu Buhari and his allies, as well as the governor of the central bank, Godwin Emefiele.

“However, the majority of Nigerians and the media are incredibly silent about this. The video of the lawmaker who looked into the fraud, Gudaji Kazaure, is attached. In it, he reveals that Emefiele was detained by the DSS but released on bail after claiming to be experiencing “heart issues.”

The DSS subsequently gave him bail, and the situation was resolved.

“This lawmaker, Gudaji Kazaure is stating publicly what we’ve always known, the @cenbank Gov of Nigeria, @GodwinIEmefiele, has diverted over N89trillion in Stamp Duty largesse between himself and big banks, but where he got it wrong is praising the mannequin in Aso Rock @MBuhari under whose watch this scam was perpetrated,” the convener of #RevolutionNow said.

In reference to the other claim, Sowore said, “I can swear to the conspiracy between the Attorney General @ Marshal D F Abubakar and the Governor of the Central Bank of Nigeria to cover up this monumental corruption.