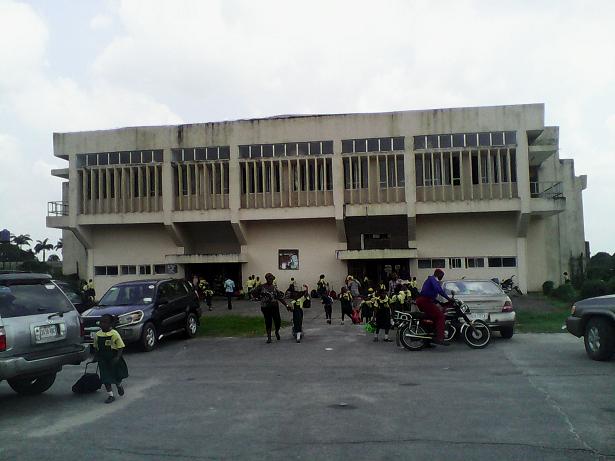 ♦ How NLC Sold Teachers Out To Oppressors After Being Bribed

♦ We Are Living In Soweto – Teachers Cries Out

Against the law of the International Labor Organization on teachers, stating that teachers should “receive the same remuneration and enjoy the same basic conditions of employment as teachers employed on a full time basis” which was collaborated by the law governing employment in the Nigerian National Petroleum Corporation (NNPC), we can still confirm that NNPC is not only a breeding ground of corruption in Nigeria, but a field where teachers employed there are turned to slaves for lives, who work for their paymasters, while the Zonal Managers and top directors in Abuja pocket the money legally meant for them.

As exposed in the part one of this report, we have it on good authority that Alhaji A.U Babangida was the NNPC Warri Zonal Manager (ZM) who sold out the teachers to a fraudulent company, Lighthouse Engineering Ltd, under the guise of a contract, while NNPC pay their salary through the backdoor. Several investigation carried out on NNPC Warri Zonal office reveals that the current Zonal Manager, Mr. Olegunleko Bola. A has not only perfected the job began by Alhaji Babangida, but has added twist to the whole scenario, by issuing threats to the traumatized teachers whenever they try to bring their plights to the public domain. A reliable source in the Zonal office we gathered had planned to advise the teachers to write to the National Human Rights Commission (NHRC), but was hurriedly transferred out of the zone.

In 2004, following a near violent explosion by the angry teachers to demonstrate against the slavery they are subjected to, the then ZM, Alhaji Zaki Abdullahi gathered them and offered to pay them the sum of N100,000 as payoff, despite working for 5 to 15 years, an action which prompted an outrage, before the plan was shelved and promises were made to them about making them permanent staffs, which was never fulfilled till date.

An highly placed and impeccable source within the Zonal office confided in this newspaper that the money shared by the Zonal office from the teacher’s salary is over N120,000 million Naira yearly since the year 2008. “I don’t know how much they have been cutting from the teacher’s salary since inception, but I can tell you that the ZM alongside Lighthouse makes over N120,000 million monthly from the teachers yearly, that is if it is not more than that. Bola and Bamidele are exploiting the teachers. Our boss on top knows and that is why he has kept quiet, as long as they get their share monthly. As long as nobody talks about it, they will remain our slaves”, the source stated.

In December 2012, Olegunleko gathered ten heads of departments in Warri Zonal office and shared N500,000 each to them in celebration of the gain made that year from the teachers benefit, while he gave each of the ‘contract’ teachers a bag of rice worth, N8550. Against the permanent staff who are paid over N600,000, the paymaster (Lighthouse) in connivance with NNPC Zonal office pay the illegal ‘contract’ staff a meager salary of N55,000 despite being graduates and working for over fifteen years, while some have worked up to twenty five years.

One of the letters written by the teachers to the Nigerian Labor Congress (NLC) to help them wade into the issue we gathered got to Abuja, but was botched by the Warri office of NLC. Enquiries made by us reveal that NLC Abuja directed the Warri office to investigate the petition sent by the teachers, which they did. Having done their findings and concluded that the teachers deserves to be paid all their benefits since they began the job, the ZM, Olegunleko we gathered sent one Alhaji Aliyu who is now in NPDC, Benin and Chief Victor Dabo Ofuyidi to go to the labor leaders in Warri with huge sum of money to seal the report from getting to the NLC headquarter.

Further investigations show that on the day Alhaji Aliyu and Dabo got to the NLC office, they met one Mr. Goodluck who received the money on behalf of the union. An insider who confided in us noted that some of the teachers approached the union leaders to find out why they have not acted on their findings. “They came to meet us here to know why we have not done anything, though they didn’t meet our Chairman. They even sat down and waited for the Chairman to come, but when the Chairman came, he went into his office. That was when Goodluck (a NLC leader) told the chairman that, “these are those teachers wey Abuja say make we fight their case, but you know na say their Zonal Manager don con give us envelopes. Oga how you see am”. This was how the case of the teachers ended; though the NLC Abuja is not yet aware of this”, stated the source.

The NNPC Corporate Policy and Procedure Guide (CPPG) obtained by us nullifies all form of contract staff in the system, hence the consistence denial that they never exist. Some of the I.D cards of the temporary Staff (who have served over 15 years) in our possession however counter the claims that there are none of such in the establishment, as they attest that they are their staff, though a purple letter ‘temporary’ is stamped on them. The CPPG on page 80, section 18.4.2 which has ‘CONTRACT APPOINTMENT’ as the heading reads;

“(i) Envisaged in this category are experienced professionals and other staff who are normally 45 years and above who are required to provide critical services or perform a specific task over a relatively short period by virtue of proven experience in the particular area. Such appointment also presupposes that a permanent staff of that caliber is not available in the system at the material time to fill that position.

A contract appointment of this type shall be made for a maximum of 2 years at a time, and subject to termination by either side upon one giving the other one month-month’s notice or payment of one month salary in lieu of notice. The contract staff shall be entitled to the consolidated salary plus 10% thereof contract allowance and the fringe benefits stated in the contract Agreement Form as appropriate to the grade as stipulated in NNPC Conditions of service, except loans and advances which cannot be liquidated before the expiration of the contract.

(iii) Staff on contract employment shall also be appraised annually.

Calls put through to the NNPC Warri Zonal office and the headquarters led to blame trading as both offices shifted the questions to each other. The Zonal Manager noted that he is not aware of any contract staff and the question should be directed to the headquarters in Abuja. Another call placed to the group general manager (Human Resources) Mr. Peter Odjoji directed us to contact the Zonal Manager. When told that the ZM says Abuja office should answer our enquiry, he noted, “How can he say that? That is his zone; he is the person to answer your question. Please ask him” 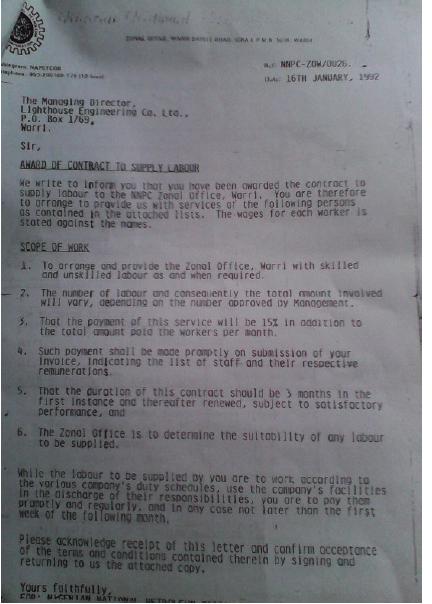 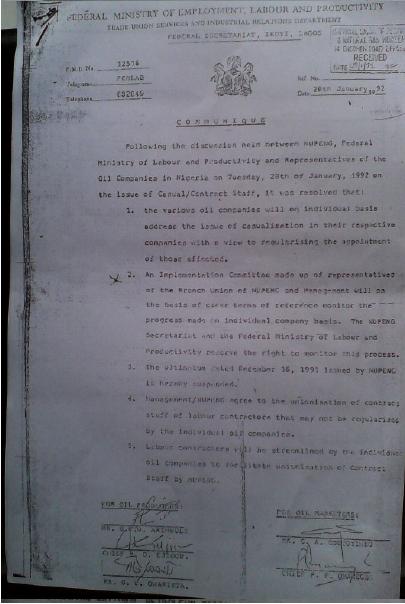