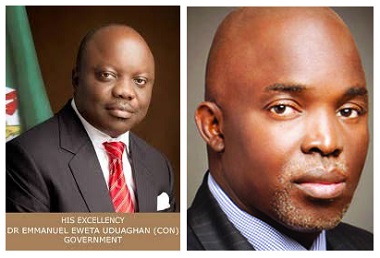 For those still wondering how Amaju Pinnick emerged the President of the Nigeria Football Federation (NFF), their imaginations can cease as thrilling documents seen by Secrets Reporters has uncovered how millions was spent fictitiously to host NFF.

In a letter written to Governor Emmanuel Uduaghan via the Secretary to the State Government (SSG) by Pinnick Amaju Melvin on 10th September titled ‘Special Request for the hosting of the 1st Extra Ordinary General Assemblies of the Nigeria Football Federation’, it requested the State Government to host the Assembly as demanded by FIFA between 18th to 25th of September 2014..

Arm twisting the Governor into hosting them, paragraph two of the document reminded him of his pledge to do so when he hosted the 69th NFF Annual General Assembly in Warri in November 2013.

“In the light of the foregoing, His Excellency is invited to graciously note the above and to (Ai) Approve the hosting of the 1st Extra Ordinary General Assembly of the Nigeria Football Federation in Warri in September 2014 (ii) The grant of the sum of N47,000,000,00 (Forty Seven Million Naira0 only for the said hosting; and (B) Direct the Ministry of Finance to release the sum of N47,000,000.00 (Forty Seven Million) only to the Delta State Sports Commission for the purpose state above, please”, part of the document stated which was signed by Amaju with memo no: DSSC,3/T2/13..

The staggering N47 million was broken down into:

Which was the total of N47 million. Amaju advised the governor to incur the expenditure from the Governor Contingency Vote.

On 15 September 2014, without passing through the SSG, the Governor approved N40 Million

Despite the money being approved, investigations carried out revealed that the most expensive hotel rooms in Warri cost $300 which is not even up to N50,000. This meant that for each of the 15 persons in the suite, the sum of N100,000 went to private pockets while the rest lodged in rooms not above N20,000; thus bring about another multimillion fraud. The conference hall which was hired ironically belonged to Amaju, which is not near the cost inputted. Government vehicles were used for the event; hence the hiring was a hoax to siphon funds; just like many of the costs were inflated.

If Nigerians think that was all, then the big picture is just arriving, as the letter written to the governor was duplicated and money assigned for the same project that took place the same time.

In a similar letter written to the Governor but headline ‘Special Request for the hosting of the 2nd Extra-Ordinary General Assembly of the Nigerian Football Federation’, which was dated 14th September 2014 with memo no : DSSC.3/T2/16, Amaju made another outrageous demand.

According to the document, the same amount with breakdown as the 1st was needed to host the 2nd which takes place the same month. The budget however got questioned by the governor who inscribed question marks on three of the requests, namely; Entertainment, Publicity and Security which cost a total of N12.5 Million.

Despite the three items removed by the Governor, he still approved N40 Million like he did to the rest. Interestingly, if the N12.5 million he questioned were removed, the N47 Million demanded is already covered. It means the Governor ought to approve N35 Million for the hosting, but he added the bonus of N5 million from the State treasury.

On the same 15th September 2014, Governor Uduaghan signed away N80 Million to Amaju. According to sources, this was the money used in bribing the delegates to vote for Amaju during the NFF election. Amaju Pinnick is the immediate younger brother to Uduaghan’s wife, Sheila Roli.

Governor Uduaghan who has successfully looted the state as revealed by many groups is currently plotting to install Sir Anthony Obuh who he believes can cover up his mess, a move rejected by Deltans, while he desperately finds way to go to the Senate, which has become a retired assembly for ex looters.

Over the week, his Itsekiri kinsmen have disowned him and threatened to lay curses on him for not doing anything in his homeland. Warri North where he hails from is still in traditional shape while his immediate village have been without light for over six months.

Fejiro Oliver is the Editor In Chief of Secrets Reporters News and Managing Editor of Daily Voice NG.