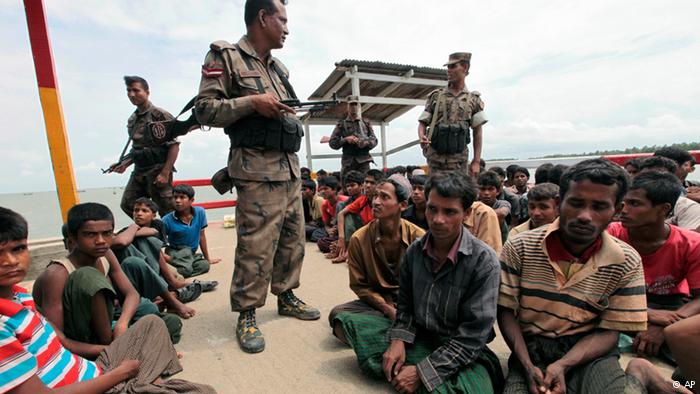 The policy of violence and persecution against the people of Rakhine in Myanmar, formerly known as Burma, is continuing before the eyes of the world. Acts of violence against Muslims are on the rise in the region, where hundreds of thousands of people have had to flee their homes and thousands have lost their lives since 2012.

Every person who has had to flee his country has a unique story. Some have lost their father, spouse or child, some have seen their loved ones tortured before their eyes, or be taken away, never to be heard of again, while those left behind have had to flee.

The only solution available to the people of Rakhine is the ocean. They embark on journeys of hope in rickety boats, by dint of the winds and waves, hungry and thirsty for many days on end in the hope of attaining freedom and peace in a neighboring country.

Many people have lost their lives on these journeys, not to mention hundreds of nameless others who do not even appear as statistics, since the true numbers are unknown.

So do these journeys undertaken with such hopes end happily? Do these people find the peace they long for where they hoped, in Malaysia, Thailand and Indonesia?

We saw one instance very recently. People from Rakhine, said to number in the thousands, in dozens of boats plying the waters of the Bay of Bengal, the Indian Ocean and the Straits of Malacca for weeks on end after May 10, were first turned away by the border security forces in Thailand, and then by those in Malaysia and Indonesia and forced back to the ocean on the grounds they posed a “threat to national security.” They were kept waiting, hungry and thirsty, children included, before the eyes of the world. Only the impoverished people living in the province of Aceh in the north of the Indonesian island of Sumatra stood up for them and that despite enormous pressure being placed on them not to. Students collecting aid and civil society organizations endeavoring to get aid to the region, using their own humble means, gave the world a lesson in humanity.

Why it is these people are unwanted in both their own country and those to which they flee? What is the reason for the violence to which they are exposed? The answer is clear: To prevent them from abiding by Islam in their daily lives and to hinder any spread of their beliefs.

The people of Rakhine are always experiencing the kind of thing we have witnessed in recent days. Many people see salvation as lying in other countries but they have no hope of a better life or better income in other countries because they will either be treated as slaves in the hands of human traffickers in those countries or else will try to survive in inhuman conditions in containers or shacks. Moreover, Malaysia, Indonesia, Bangladesh and Thailand regard refugees from Rakhine not as a humanitarian problem, but as a problem for their own security. Indeed, although human traffickers were blamed for the mass graves recently uncovered in areas close to the Thai and Malaysian borders, inquiries have revealed that the border security units were actually to blame.

While the poor people of Aceh used all the means at their disposal to assist the people of Rakhine, the Association of Southeast Asian Nations (ASEAN) human rights commission regards the ongoing genocide inflicted on the people of Rakhine as little more than a domestic issue for Myanmar. Yet ASEAN could put pressure on Myanmar to solve this brutal genocide taking place in its own region; they have chosen not to.

The resolution agreed to during the 28th Session of the UN Human Rights Council (HRC) condemned the systematic human rights violations against the Muslims of Rakhine in Myanmar and the way they were being forced from their homes. But does issuing condemnations or saying “we are not going to interfere in countries’ domestic affairs” actually solve these people’s problems? Of course not.

The definitive solution to the flow of refugees from Rakhine lies in dealing with the reasons behind it. The main reason for that migration is quite simple: People are afraid for their lives.

First and foremost, if the problem is to be solved we must stop saying, “Let us not interfere in Myanmar’s domestic affairs.” The Myanmar administration has to be told, at the international level, that killing people for no reason, forcing them from their homes, seizing their possessions and torturing them is the most horrific persecution. If necessary, international sanctions must be applied. There are also politicians and writers who do not support the oppression of Muslims in Rakhine. It is very important for the pacifist human rights defender Aung San Suu Kyi, who spent years striving for constitutional change in particular, to be supported in the international arena in the national elections due to be held towards the end of this year.

One cannot of course expect a completely smooth transition from decades of policies of oppression to open democracy and openness to international dialogue on the part of a country that has been isolated from the West. However, the key for peace and reconciliation would seem to be for officials in the country to take the requisite steps in favor of democracy, freedom and human rights, to introduce reforms based on international criteria that support these values, and for the Buddhists who represent the majority in Myanmar to be summoned back to the love, compassion and tolerance that lies at the heart of Buddhist teaching.

It is very important that both ASEAN and the U.N. should assume an instructional role to ensure that all the ethnic and religious communities in Myanmar can benefit in a fair and equal manner from democratic progress. And, of course, Muslim countries must extent an avuncular hand to their brothers in faith living far away. These things are no dream. The helping hand extended to the people of Rakhine by the people of Aceh, who have themselves suffered so much, despite their own poverty and in no expectation of any reward, must act as an encouragement to ASEAN, the U.N. and the Islamic world.

If we wish to halt the flow of refugees from Rakhine and bring a halt to the continuing violence there, then has not the time come to fight the conditions that oblige these people to become refugees, rather than to accept them to being condemned to live as refugees under the most difficult conditions?