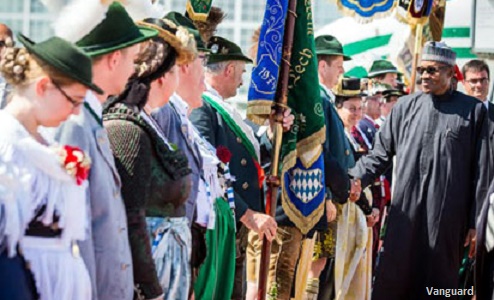 I had been wondering how Nigeria’s President Muhammadu Buhari seemed to be easily relenting that Nigeria can not fight Boko Haram and other issues alone except with help of foreign nations , not even our neighbouring countries of Africa like Chad and Niger, but US and other European nations. This is startling, knowing that PMB had once expressed confidence in Nigeria’s capacity , especially its ability to defeat the dreaded Boko Haram group. ‘What now causes this foreign reliance?’, a question that aroused my curiosity.

I also remember how he leveled criticism against Jonathon’s government over its slow and poor response to end Boko Haram insurgency with the country’s military capacity he believed Nigeria has. He pecked Jonathan for dragging his heels over taking the fight against Boko Haram seriously. On Aljazeera TV interview with GMB , he expressed concerns and this confidence or words to that effect:

“The government is not prepared to fight Boko Haram,” GMB said.
‘[It] is not serious about curbing the insurgency in the northeast. If the troops deployed in Ekiti State to rig votes in favour of the government had been effectively deployed in the north east, the end of the insurgency could have been met.’ This speech indirectly showed that GMB had confidence in Nigeria’s military ability to crush the terror group and put an end to it.

I can also recall how Jonathon’s begging for US help to fight Boko Haram in Nigeria met public criticism. His appeal to US for help in Nigeria came in for criticism by some Nigerians who did not only feel that it is awkward for Africa’s leading economy to show lack of confidence in its army but also seeking assistance or intervention from US or other foreign nations is like selling Nigeria out for further exploitation or neocolonism. Because it is deemed by some people that US exploits terrorism and other issues to to justify the invading of some countries for their own gains or interests, especially in oil-rich nations. However, US did not even help Nigeria then for some plausible reasons they gave. Although It was rumoured that US refuses to help Nigeria because of Nigeria’s continuing stance against ‘gay’ marriage. However, this rumour was debunked later.

It is ironically startling , that our beloved President Muhammadu Buhari, is now seeking assistance from foreign nations (G7 ) with his ‘wish list’, and in the list, fight against Boko Haram terror group is said to be topping the list. I was first shocked to see this on the news and I said to myself , “What on earth will make our President take such an unpleasant decision?, Was it part of their party plans or his?’ But then I wisely realised something and said to myself , ‘Ah ! Our President must be going through a difficult time to make such a hard decision that some Nigerians may not like. Some horrible things must have made him take this difficult and unexpected decision out of necessity.’

I then remembered how PMB inherited big problems from the out gone government: the drained treasury and the dreaded Boko Haram group that the outgone government gave fertile ground to grow due to the government’s poor and slow response , and the stubborn monster corruption to kill, and so many traps that some unpatriotic people had to set for PMB on his way , things that will make the journey rough since their target is to create unfortunate circumstances that will negatively influence every decision that he will make- the unpleasant options he will eventually resort to, which automatically , some people may disapprove of or agitate, because it is not everybody that can look at the ugly challenges and understand the gravity of the problems he is facing. Unpatriotic people have almost destroyed the country when PMB came to save it. They planned and calculated everything even after he won the race – the deteriorating problems they created waiting for PMB, the controversy, the chaos, and the storm of criticism they will arouse against him. They sadistically want to see him fail like they did , so that they will make a laughingstock of him in the eyes of Nigerians and the world.

So many things that make PMB’s ‘wish list’ to G7 a necessity for Nigeria, ‘the hard way and the only way! But one thing they underestimated this people, is his ‘confidence and honesty’, the things they did not calculate well, because do not know that they are just unleashing the hero in him. He will rise to redouble his efforts in order to scatter corruption , terrorism, and all the problems they gave fertile ground to grow in order to stop him. He is invincible and unstoppable with God and all the patriotic Nigerians by his side. He will never jeopardise Nigeria’s future. I’m optimistic. He knows what he is doing and Nigerians trust him. So let us wait patiently and pray that the journey will be promising and enjoyable.