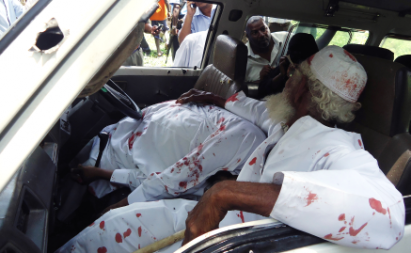 Youths clash with police outside the militant Masjid Musa Mosque after the death of Sheikh Aboud Rogo in 2012, accused by Kenya and the US of terrorism activities
MOMBASA, 28 July 2014 (IRIN) – More than 21 Islamic clerics have been gunned down in Kenya’s southeastern port city of Mombasa over the past two years, according to the human rights group Haki Africa. All but one of them was linked by the government to terrorism and support for the al-Shababinsurgency in neighboring Somalia.

The Kenyan government has strenuously denied allegations the security forces are involved in extra-judicial killings. Mombasa Country Commissioner Nelson Marwa told IRIN: “It is easy to point fingers, but do they have any evidence?” Human rights groups have called for the killings to be investigated.

Mombasa is fertile recruiting ground for al-Shabab, working through radical mosques and clerics. These leaders portray the conflict across the border as jihad, and for many youth, that has an energizing appeal. “In the competition for followers, the moderates appear to be losing the battle for winning over the youth,” said Hussein Khaled of Haki Africa. “The killing of so-called radical imams is winning them [the militants] sympathy and support.”

Sheik Juma Ngao of the Kenya Muslim National Advisory Council described the recruitment as “human trafficking in the name of jihad”. He alleged each young man crossing the border earns the recruiter the equivalent of US$1,150. And, he added, “they don’t go for the scholars, they go for the poor.”

But Khaled described a deepening well of anger fuelled by joblessness and a growing perception among some Muslims in Mombasa, overlooked by historically skewed development, of injustice; that they are no longer “part of Kenya”. The death of each cleric in suspicious circumstances furthers radicalization. “It’s gone beyond the money a recruit might earn. They are now doing it in the belief that they are being harassed, killed, and the only way is to fight back,” he said.

There is friction between clerics splintered into several organizations in Mombasa, based on ideological conviction, and the growing danger of being perceived as on the “wrong” side. “Moderates” accuse “radicals” of deliberately grooming young men for combat in the name of Islam, while the Salafists condemn the silence and lack of indignation from their co-religionists when one of them is killed.

Haki Africa has held three meetings to try and bridge the “huge gulf of misunderstanding”. The consensus from both sides was “leave us alone to practice our interpretation,” said Khaled.

“They were open that they were for jihad and that they will die for it,” said Ngao, who was at the meetings. “They said ‘If you don’t support us, leave us alone, don’t touch us. But if you touch us, we’ll kill you’.”

Said Khaled: “When we went into dialogue we didn’t understand what the youth were going through… You can’t divorce from this the discrimination and marginalization of the region. We had only been exposed to one side [of the argument]. So the government needs to encourage inter- and intra-religious dialogue.”

But the killing in April of Sheikh Makaburi, a prominent leader at the controversial Masjid Musa Mosque, has put dialogue on hold. The shooting of moderate Sheikh Mohammed Idriss in June, the chair of the Council of Imams and Preachers of Kenya, is widely seen as revenge for his death.

The July murder of Shahid Bhat on his way home from the airport has further heightened tensions. Bhat, a successful businessman, had been arrested and charged with financing terror operations in Mombasa and the coast. He was shot 200m from the Changamwe police station.

The following is a list of Muslim clerics and youth leaders killed in or around Mombasa in the past two years. In each case no arrests have yet been made.

Linked to the Machakos Country bus blast in which six people died and over 60 were injured, Mohammed Kassim’s body was found in a Kilifi mortuary several kilometres from his Mombasa home. His relatives said he was abducted from a matatu (public transport vehicle) in Mombasa’s Likoni area before being bundled into another vehicle before his death.

Aboud Rogo Mohammed before the Mombasa Chief Magistrate where he was charged for being in possession of illegal firearms in this file photo. Mr Mohammed is among three Kenyans whose assets have been frozen by the US over alleged links to Al Shabaab.

The body of the Muslim cleric was found dumped, and mutilated, in Tsavo Forest in Taita Taveta County along the Nairobi-Mombasa highway three days after he was reported missing. A former confidant of controversial Muslim preacher Aboud Rogo Mohammed, the 39-year-old was facing several terror related charges in Mombasa courts. He had also been accused of being behind the recruitment to al-Shabab of youths in Mombasa and Kwale counties.

Aboud Rogo Mohammed was on US and UN sanctions lists for allegedly supporting Somalia’s al-Shabab militants. The UN Security Council imposed a travel ban and asset freeze on him, saying he had provided financial, material, logistical or technical support to al-Shabab. It accused him of being the “main ideological leader” of Kenya’s al-Hijra group, also known as the Muslim Youth Centre, which is viewed as a close ally of al-Shabab.

He was accused of using the extremist group as a pathway for radicalization and recruitment of principally Swahili-speaking Africans to carry out violent activities in Somalia. He was also facing charges of plotting terror attacks in the East Africa region. He was killed along the Mombasa-Malindi highway, while driving a vehicle containing his wife and other family members.

Following the killing, protests erupted in several parts of Mombasa for a couple of days, resulting in in several people, including a security officer, being attacked and killed, as radical youths sought revenge. Several churches were torched, and property destroyed. The sheikh preached at the controversial Masjid Musa mosque.