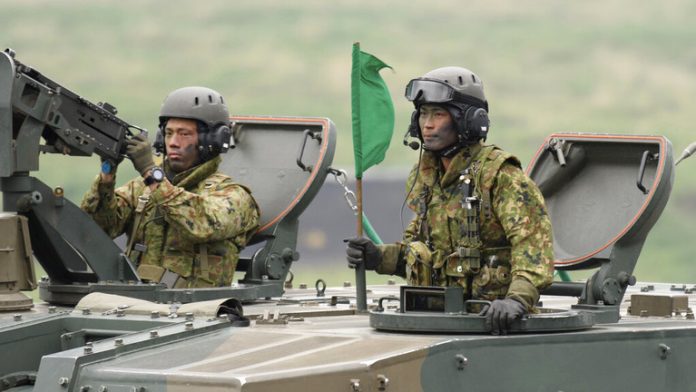 Fumio Kishida, Japan’s Prime Minister, began 2023 with a tour of G7 countries, visiting France, Italy, the United Kingdom, the United States, and Canada. Kishida, who is the President of the US-centric group this year, will host its summit in Hiroshima in May.

While many of his trips were focused on preparing the ground for the summit, Kishida signed a slew of defense deals along the way, demonstrating how the visit ties in with Japan’s ultimate goal right now: rearmament.

Since the end of WWII, Japan’s military power has been strictly defensive due to the country’s constitution. The country renounced the right to settle disputes through armed conflict and ruled out having an army or fighting a war in another country. This has limited defense spending while also making Japan reliant on the United States for security. However, these restrictions are no longer in effect, even if they remain on paper. Tokyo has the well-equipped Japan Self-Defense Forces, effectively a standing defensive army, and has recently pledged to double its defense spending by 2027 and to achieve “second strike” capabilities with a target on both China and North Korea, igniting a regional arms race.

Former Prime Minister Shinzo Abe was assassinated in 2022. While he died, his ideas about Japanese military revisionism persisted. The climate of geopolitical competition created by China’s rise and North Korea’s nuclear missile program has effectively ended Japan’s pacifist epoch. These changes have allowed the nationalist Liberal Democratic Party (LDP), despite decades of poor economic results, to maintain perpetual power among its key coalitions and thus force through this revisionism, despite opposition from some Japanese citizens.

While the United States has always seen Japan as the bulwark of its power-projection in Asia, a position it consolidated during the Korean War, it is now allowing Japan to “escape the leash” of its post-war military limitations, hoping it will help in the containment of China. The Biden administration has a strategy of forming coalitions to target Beijing, such as the Quad and AUKUS. The United States intends to counter China’s rise by providing allies with expanded military capabilities and capacity that they did not previously have. Allowing Australia to acquire nuclear submarines through AUKUS, for example, or, in this case, allowing Japan to expand its military reach by building new air bases in Okinawa.

As a result, Washington sees Japan as a critical asset in a Taiwan-related conflict with China, with Japanese territory effectively 100 kilometers or so east of the island itself. As a result, Japan now sees the island as a critical variable in its own defense policy, because if Taiwan falls to mainland rule, Japan will be militarily ‘checkmated’ by China, changing the balance of power in Asia against the US. A missile unit is currently being built on a Japanese island near Taiwan. While Tokyo does not officially recognize Taiwan’s independence and maintains a strategic ambiguity on the issue, its close ties with the US, as well as the fact that its constitution was amended in 2014 to allow for military action in defense of allies, both increase the possibility of Japan intervening directly in a Taiwan conflict.

What is noteworthy is that Japan is not only looking to the United States for military expansionism, but also to other countries. This includes, among other things, stronger ties with the United Kingdom, Canada, and Australia. For example, Japan will collaborate with the United Kingdom and Italy to develop a “next generation fighter jet” that will incorporate artificial intelligence. While it is clear that the US is pressuring its allies to work together to contain China, such moves also demonstrate how Japan is attempting to reassert its own strategic independence in order to reestablish itself as a military power in its own right, something it has not attempted since the 1940s.

All of this, however, introduces a new danger dynamic to Asia. To begin with, Russia and China both see Japan as a potential military adversary in northeast Asia, and will likely align more in response to this dynamic. Second, Japan’s militarism is escalating an already tense situation with North Korea, which is motivated to increase its nuclear and ballistic missile capabilities in the face of a stronger Tokyo, finding greater justification to do so. Third, anti-Japanese nationalism in China will rise, increasing tensions between the two countries. Finally, despite having a common ally in the US, what will South Korea do in the face of an increasingly powerful Japan? It may feel militarily dominated or isolated, forcing the country to arm itself further in the face of a slew of challenges. As a result, Japan’s rearmament will have a massive destabilizing effect on Asia, which Washington welcomes in order to maintain its clout in the region.