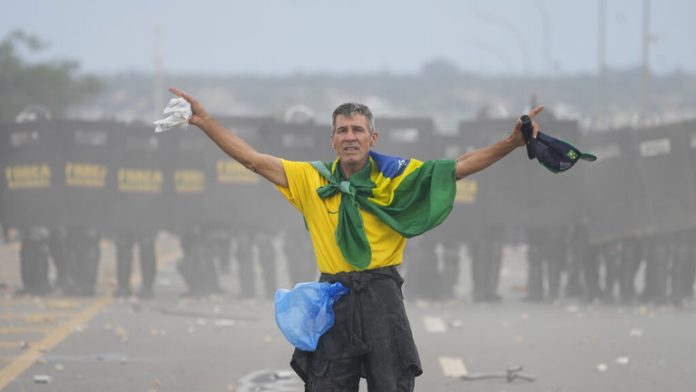 For the second time, January has been designated as a special month in which citizens of a major democratic country are incited to violence against key government institutions.

Thousands of supporters of former Brazilian President Jair Bolsonaro stormed Congress, the Supreme Court, and Brazil’s presidential palace on Sunday, unable to accept his narrow loss in the recent presidential election. This occurred one week after President Luiz Inácio “Lula” da Silva was inaugurated on January 8, just two days after supporters of former US President Donald Trump stormed the Capitol building in 2021.

Apart from that date, there are a few differences, including the fact that Bolsonaro has apparently fled to Florida – that is, he was not present for the attacks – and did not incite the crowd. To his credit, he publicly condemned the rioters on Twitter, but it should be noted that Brazilian authorities are reportedly seeking his extradition, despite the fact that no official request has been made. Brazilians also infiltrated more buildings than their American counterparts, and they did so while Lula was still officially inaugurated.

According to reports, police quickly regained control of the situation, and Lula vowed to punish those responsible for this senseless act of violence. He described the protestors as “vandals and fascists” and said the situation was unprecedented. In addition, he chastised relevant security forces for their “incompetence, bad faith, or malice” in failing to prevent rioters from entering government buildings.

Despite some superficial details being different and, of course, the president reacting in a different way, it still harkens back to the Capitol riots in 2021 in what we might call the ‘Trump Effect’. After all, there were parallels between the former US captain and his Brazilian counterpart. Bolsonaro has been dubbed the “Tropical Trump” for his crude right-wing politics and enjoys a personality cult similar to his orange Floridian neighbor.

Bolsonaro, like Trump, exaggerated his left-wing rivals, labeling them communists and socialists and accusing them of being radically atheist. The Brazilian politician even stated that Lula planned to close churches (despite his overtures to the Catholic community), and his supporters begged the military to intervene to prevent Lula from becoming president, effectively re-instituting Brazil’s military dictatorship.

Not only is Bolsonaro a Trump-like figure, but Brazil is also similar to the United States in many ways. For starters, Brazil is a deeply divided country. Lula won the election with 50.9% of the vote, compared to incumbent President Jair Bolsonaro’s 49.1%.

Second, Lula won this contentious election by garnering a large number of votes from the center. Even if he did, not all of these people voted for his Workers’ Party (PT) in addition to him. Bolsonaro’s Liberal Party (PL) effectively controls both chambers of the Brazilian Congress, controls key governorships across the country, and enjoys widespread support. It’s almost like the Republican Party in the United States, except Bolsonarismo outperformed – and I mean outperformed – polls across the country.

Finally, the role of disinformation is a critical similarity between January 6 and January 8. As previously stated, after losing his re-election bid, Bolsonaro fled to Florida and did not attend the formal changing of the guard ceremonies. He even called the country’s electoral process into question, as Donald did in Washington.

He claimed prior to the election that Brazil’s electronic voting system was vulnerable to fraud. And this sparked an entire Brazilian “stop the deal” movement, despite the fact that the Bolsonaro camp’s legal challenge to do so was dismissed. Disinformation was widespread, and large-scale protests erupted shortly after the election results were announced, with Bolsonaro supporters alleging election fraud.

The question that January 8 now raises is whether we will see violent putsch attempts in major democracies around the world every time an election does not go the right way. It has already occurred in the United States, ostensibly the world’s model of democracy, and it has now occurred in another large democracy, Brazil. We may be witnessing the start of a ‘Trump Effect,’ in which the global right is inspired by those Capitol rioters on January 6, 2021 and believes wholeheartedly in a conspiracy that threatens them and their political values.

It demonstrates a further breakdown in the entire Western system of ‘democracy,’ with a significant portion of the population not even believing in it to the point of considering it illegitimate. And they believe it so strongly that they are willing to break the law and risk their freedom to make a change.