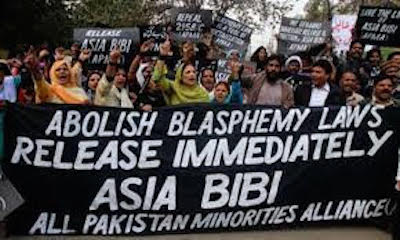 This week’s decision by Pakistan’s Supreme Court to delay ruling on an appeal in the country’s most notorious blasphemy case and the thousands of security personnel deployed in its capital, Islamabad, in anticipation of a verdict, lay bare the degree to which Saudi supported ultra-conservative worldviews abetted by successive Pakistani governments have changed the very nature of Pakistani society.

At stake in the court case is more than only the life of Asia Bibi, a Pakistani Christian mother of five who has been on death row since 2010 when she was convicted of insulting the prophet Mohammed in a bad-tempered argument with Muslim women.

The court has yet to set a new date for the appeal, but ultimately its decision on Ms. Bibi’s fate will serve as an indication of Pakistan’s willingness and ability to reverse more than four decades of Saudi-backed policies, including support for militant Islamist and jihadist groups that have woven ultra-conservative worldviews into the fabric of Pakistani society and key institutions of the state.

In an ironic twist, Pakistani Prime Minister Nawaz Sharif with his close ties to Saudi Arabia is groping with a dilemma similar to that of the kingdom: how to roll back associations with puritan, intolerant, non-pluralistic interpretations of Islam that hinder domestic economic and social progress and threaten to isolate his country internationally.

Successive Pakistani governments benefitted and abetted almost half a century of massive Saudi funding of ultra-conservative thinking in a bid to enhance Saudi soft power and counter more nationalist, revolutionary and liberal worldviews. Pakistani and Saudi interests long jelled in the support of militant Islamist and jihadist groups that targeted Muslim minorities viewed as heretics by ultra-conservatives, confronted with US backing Soviet occupation forces in Afghanistan, nurtured the rise of the Taliban, and served Pakistan in confronting India in its dispute over Kashmir.

In doing so, Saudi Arabia and Pakistan unleashed a genie that no longer can be put back in a bottle. It has pervaded Pakistani society and branches of government in ways that could take a generation to reverse.

The timing of the delay of the court ruling may have been coincidental but it came days after the Sharif government took a first step in seeking to change course.

Pakistan’s civilian, military and intelligence leaders had gathered three days earlier for an emergency meeting in which Sharif and his ministers warned that key elements of the country’s two-year old national action plan to eradicate political violence and sectarianism, including enforcing bans on designated groups, reforming madrassas, and empowering the National Counter Terrorism Authority (NACTA) had not been implemented. The 20-point plan was adopted after militants had attacked a military school in Peshawar in December 2014, killing 141 people, including 132 students.

In a blunt statement during the meeting, Foreign Minister Aizaz Ahmad Chaudhry charged that Pakistan risked international isolation if it failed to crack down on militant groups, including Jaish-e-Mohammed, Lashkar-e-Taiba; and the Haqqani network – all designated as terrorist groups by the United Nations. Mr. Chaudhry noted that Pakistan’s closest ally, China, with its massive $46 billion investment in Pakistani infrastructure, continued to block UN sanctioning of Jaish-i-Mohammed leader Masood Azhar, but was increasingly questioning the wisdom of doing so.

The court delayed its ruling after one of the judges recused himself because of his involvement in legal proceedings related to the 2011 assassination of former Punjab governor Salman Taseer by Mumtaz Qadri, a former elite police force commando. Taseer was a vocal opponent of Pakistan’s draconic blasphemy laws and supported Ms. Bibi.

Mr. Qadri became a hero despite being sentenced to death. Tens of thousands of people poured into the streets of Islamabad to honour him after he was executed earlier this year. Authorities feared that a court ruling in favour of Ms. Bibi would spark mass protests. The delay in the court ruling simply postpones a potential confrontation.

It is a confrontation that was long coming. Pakistan’s blasphemy law fits decades-long Saudi use of its political clout and financial muscle to promote anti-blasphemy laws and curtailing of freedom of expression and the media beyond its borders.

The Saudi effort benefitted in the post 9/11 era from a global trend in democracies and autocracies alike to curb free speech. “The issue of blasphemy is destroying whatever strands of pluralism remain,” warned Pakistani researcher Nazish Brohi.

Notions of blasphemy propagated by the Saudi Arabia have led the kingdom to execute those that refuse to publicly subscribe to its narrow interpretation of Islam. In Bangladesh, secular bloggers risk being hacked to death while jihadists slaughter those they think have insulted their faith in an effort to stymie all debate. Pakistan’s electronic media regulator this year took two television shows off the air during Ramadan for discussing the country’s blasphemy laws as well as the persecution of Ahmadis, a Muslim sect viewed by ultra-conservatives as non-Muslim.

A proposal in recent years by Saudi Arabia and other Muslim nations to criminalize blasphemy in international law legitimizes curbs on free speech and growing Muslim intolerance towards any open discussion of their faith.  The proposal was the culmination of years in which the kingdom pressured countries to criminalize blasphemy and any criticism of the Prophet Mohammed.

Increasingly, the pressure constituted the kingdom’s response to mounting anti-Muslim sentiment and Islamophobia in the wake of attacks by the Islamic State in European and Middle Eastern nations, including Paris, Ankara and Beirut, and the October 2015 downing of a Russian airliner, and mounting criticism of Saudi Arabia’s austere interpretation of Islam and massive violations of human rights.

The criminalization of blasphemy and the notion of mob justice resembles campaigns on Western university campuses for the right not to be offended. Both propagate restrictions on free speech and arbitrary policing of what can and cannot be said.

In a lengthy article in a Nigerian newspaper, Murtada Muhammad Gusau, chief imam of two mosques in Nigeria’s Okene Kogi State debunked the Saudi-inspired crackdown on alleged blasphemists citing multiple verses from the Qur’an that advocate patience and tolerance and reject the killing of those that curse or berate the Prophet Mohammed.

Saudi anti-blasphemy activism and efforts to curb press freedom date back to 1980 when the government wielded a financial carrot and the stick of a possible rupture in diplomatic relations in an unsuccessful bid to prevent the airing on British television of Death of a Princess, the true story of a Saudi princess and the son of a general who were publicly executed for committing adultery.

Saudi Arabia forced Britain to recall its then ambassador, James Craig, in protest against what it called “the British Government’s negative attitude toward the screening of the shameful film.”  In addition, the kingdom imposed limitations on visas extended to executives of British companies while US construction companies were asked not to subcontract British firms.

Saudi Arabia further banned British Airways from flying its Concorde from London to Singapore through the kingdom’s air space. The ban together with a similar one by Lebanon forced BA to chart a longer route for the supersonic flight, which wiped out its profit margin.

Scholars Thomas White and Gladys Ganley argued that “the film was perceived by Saudis as a violation of privacy since it represented a first look behind a closely drawn curtain into Islamic law as applied in Saudi Arabia, into Saudi culture, and, perhaps most devastating, into the behaviour of members of the ruling regime… Much of Saudi criticism of the film was directed towards what was called its portrayal of Islam as a harsh, insensitive religion, since the princess was depicted as having been summarily executed without a confession or a trial. The severity of punishment and the speed with which the princess was executed put doubts in the minds of viewers as to the fairness of Koranic justice.”

Concepts of justice as well as of freedom of expression are at the core of Asia Bibi’s case. So is the question of the kind of state and society Pakistan should be. It is an issue both Saudi Arabia and Pakistan are grappling with as they realize that what long was a politically convenient strategy in their various geopolitical struggles is becoming a political and international liability. The problem for both is that reversing course is easier said than done and involves travelling down a volatile, perilous road.