As we exclusively broke, the wife of Nigeria’s president Muhammadu Buhari has warned her husband on his administrative policies in a BBC interview being released today. The article is captioned, “Nigeria’s President Buhari warned by first lady.”

The BBC said, “Nigerian President Muhammadu Buhari’s wife has warned him that she may not back him at the next election unless he shakes up his government.”

In the BBC interview, Aisha Buhari said the president “does not know” most of the top officials he has appointed and that the government had been hijacked, saying a “few people” were behind presidential appointments. Nigerians have been irritated that Buhari’s nephew, Mamman Daura is the defacto president, in charge of all appointment and the running of the government.

The BBC further stated that Buhari’s wife’s “decision to go public with her concerns will shock many people, but it shows the level of discontent with the president’s leadership, according to the BBC’s Naziru Mikailu.’

‘In the interview with Naziru Mikailu, Mrs Buhari said: “The president does not know 45 out of 50, for example, of the people he appointed and I don’t know them either, despite being his wife of 27 years.”

‘She said people who did not share the vision of the ruling All Progressives Congress (APC) were now appointed to top posts because of the influence a “few people” wield.

“Some people are sitting down in their homes folding their arms only for them to be called to come and head an agency or a ministerial position.”

“He is yet to tell me but I have decided as his wife, that if things continue like this up to 2019, I will not go out and campaign again and ask any woman to vote like I did before. I will never do it again.“‘ see story in BBC

Our earlier article from Sahara on more from Aisha’s interview:

The First Lady was expressing frustration with members of President Buhari’s kitchen cabinet, particularly his nephew, Mamman Daura; and his powerful chief of Staff, Abba Kyari.  They are widely-held as having shunted aside those who worked tirelessly for President Buhari to come to power.

She also said the President did not know a majority of his ministers before appointing them to office. 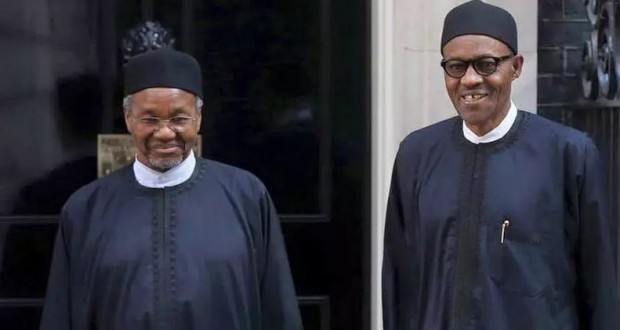 SaharaReporters has also learnt that neither Daura and Kyari voted for Buhari in the last election.  A source knowledgeable about the inner situation at the Presidency said neither man possesses a voter’s card or is registered as a member of the ruling All Progressives Congress.

Mrs. Buhari and other members of the APC are frustrated with the President because he has refused to make the changes expected of his government, and continues to empower his nephew to run roughshod on issues of governance. Mr. Daura is reportedly so powerful that Buhari’s ministers have to get his approval to get funds released for their projects.

Our sources gave the example of Daura’s influence when the Minister of Sports, Solomon Dalung, got funds released to him for the Rio Olympics 2016 after he met and received the blessing of Mr. Daura.

Also recently, President Buhari promised several persons who complained to him about the corrupt elements in his government of plans to make changes, but he never did.  Of particular importance are Mr. Kyari and the Secretary to the Government, Babachir Lawal, who are accused of corrupt practices.   Also involved is Central Bank Governor Godwin Emefiele, on account of his handling of fiscal issues.

President Buhari has disappointed many in his handling of these and other officers, and his wife of 25 years seems to be leading a revolt by voicing the concern of a majority of the president’s loyalists who feel he has mismanaged the country and the goodwill that followed him into office a year and a half ago. “What I am afraid for them is the rebellion of 15 million people,” says Mrs. Buhari at the end of the excerpt available to the public.

Quran 4:135: O you who believe, be persistently standing firm in justice, witnesses for Allah , even if it be against yourselves or parents and relatives. Whether one is rich or poor, Allah is more worthy of both. So follow not [personal] inclination, lest you not be just. And if you distort [your testimony] or refuse [to give it], then indeed Allah is ever, with what you do, Acquainted.

his is the full text from the interview of First Lady of Nigeria, Aisha Buhari, by BBC Hausa Service:

BBC Hausa: It has been One and a half years since President Muhammadu Buhari came into power, a lot of people are expressing their unhappiness over the way few acquaintance of the President have hijacked power while neglecting people that work for his success. Like we have promised, here is how the interview with Aisha Buhari and Naziru Maka’ilu from Abuja goes.

BBC Hausa: People have goodwill towards President Muhammadu Buhari, especially looking at the things he did before, but since coming into power things have not been working the way they should, what do you thing is the cause?

Aisha Buhari:  I am not a government official, but in my opinion as a woman, a mother, what I think is it is well known that the first 4 years are not going to be easy. Firstly, it was people that brought the government into power. More than half of those people are not appointed into the government. Some people that are not politicians, not professionals were brought into the government. They don’t even know what we said we want and what we don’t during the campaign.  They even come out and say to people we are not politicians, but they are occupying the offices meant for politicians. Some have parted with their wives, some lost their children lost, some women too have parted with their husbands because of politics, a lot happened during the time. The way things are going I too I am not happy. We are just starting, we have not finished. Some people that worked for the government have been appointed. But those heading government agencies you can find one fighting his state governor, they contested together during election one in APC while in PDP.
BBC Hausa: Who are those doing these kinds of things?

Aisha Buhari: Everybody knows them. Those people should know that people voted singly. Even Buhari too had one vote. Nobody voted 5 times.  15.429 Million People. That one that people are thinking too, he had only some 2 or 3 people. I am pleading to them to have the people at heart and embrace everybody so that we can all move together. Not even now in 2016 or 17, lot of people are creating divisions within the APC, which is our source of concern. They think they have worked for the government while those appointed some of them had no voter’s card. What I fear is uprising of 15.4 million people.

BBC Hausa: Is the President aware some people are subverting his government?

Aisha Buhari: Whether he knows or he do not, those that voted for him knows.

BBC Hausa: But you are the most closest to him, did you tell him?

Aisha Buhari: There is nothing I can tell him, he is seeing things himself. Out of the people he has appointed, take 50, 45 of them I don’t know them. Perhaps he doesn’t know them too. I have been living with him for 27 years.

BBC Hausa: Do you think there are some people that are dictating to the President things to do, not him?

Aisha Buhari: That is what I am saying, those that know they don’t have voters card, they should give chance to those that have, they are the ones that struggled and knows what we want to do. Some of them if you go to a meeting with them they will tell you, we are not politicians, if somebody is wise, they will not accept to take any political office. They didn’t even work for it. Even if you are asked to, you should say it is not my profession.  Those places not headed by politicians will cause people discontent.

BBC Hausa: One would wonder to hear you say some people have hijacked the government without him knowing, but who do you think are those people?

BBC Hausa: But some people are calling names, saying 2 or 3 are the ones, do you that as well?

BBC Hausa: One would wonder that Buhari is not the one charge knowing him as a person who had leadership experiences, people would not believe

Aisha Buhari: Yes it is surprising; nobody thought it is going to be like this. But now that it is so…sometimes when one is doing something wrong without him knowing, but when people talk to them, they should listen. Because in the future, whether he is going to contest or not, it is that same people that would vote for APC. We hope those people don’t come back, and everybody don’t hope so too

BBC Hausa: You said “Whether he is going to contest in the future or not”, has he disclose it to you whether he is standing or not?

Aisha Buhari: He didn’t tell me, but I have made up my mind.