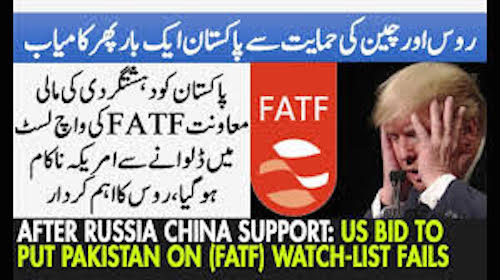 China’s recent failure to shield Pakistan from censorship by an international anti-terrorism funding and anti-money laundering body suggests that the People’s Republic is struggling to balance its contradictory interests in South Asia and may be trying to evade the potential cost of its long-standing support for Pakistani-backed, anti-Indian militants.

China’s balancing act became evident when it this month decided not to prevent the Financial Action Task Force (FATF), a 37-member, inter-governmental agency, from putting Pakistan on a watchlist. FATF gave Pakistan three months to clean up its act in a bid to avoid being blacklisted for alleged lax controls on funding of militants.

The grey listing of Pakistan was tabled by Britain, France and the United States. The Trump administration has in recent months stepped up its criticism of alleged Pakistani support of militants and slashed military assistance to the country.

The FATF action could negatively affect the Pakistan economy. Pakistan risks downgrading by multilateral lenders such as the International Monetary Fund (IMF), World Bank, and the Asian Development Bank (ADB) as well as by international credit rating agencies Moody’s, Standard & Poor’s and Fitch.

Politically and economically heavily invested in Pakistan, China’s statements and actions in recent days have highlighted the squeeze the People’s Republic finds itself in. A Chinese official, quoted by Pakistan’s Dawn newspaper, said China had not shielded Pakistan in FATF because it did not want to “lose face by supporting a move that’s doomed to fail.”

Yet, a Chinese foreign ministry spokesperson days later noted that “in recent years, Pakistan has made important progress in actively strengthening financial regulations to combat terror financing… China highly recognises that and hopes all relevant parties of the international community could arrive at an objective and fair conclusion on that,” the spokesperson, Lu Kang, said.

The Chinese attitude in FATF constituted the second time in the last six months that Beijing criticized Pakistani policy towards militants. Leader of China, Brazil, Russia, India and South Africa grouped in BRICS, identified at a summit in China last September Pakistan-backed militants for the first time as a regional security threat.

China, which is investing more than $50 billion in the China Pakistan Economic Corridor (CPEC), a key node in its Belt and Road initiative that is designed to link the Eurasian landmass to the People’s Republic through infrastructure, has grown increasingly concerned about political violence in Pakistan. One focal point of Chinese concern is the province of Balochistan, home to CPEC’s crown jewel, the deep-sea port of Gwadar.

Balochistan has witnessed repeated attacks on Chinese targets by Baloch nationalists and Islamic militants. A Bloomberg reporter, recently granted rare access to Gwadar, described a “climate of fear” in a city patrolled by hundreds

The Chinese embassy in Islamabad warned its nationals in Pakistan in December against imminent attacks on Chinese targets. Since then, a Chinese engineer has gone missing near Islamabad in an incident that has since been declared a kidnapping while another Chinese national was gunned down in the port city of Karachi.

Pakistan has in recent months, in response to US pressure and in a bid to pre-empt FATF censorship, said it was cracking down on charities associated with Jamaat ud-Dawa (JuD), believed to be a front for Lashkar-e-Taiba, an anti-Indian group designated by the United Nations and the United States, as well as JuD’s leader, Hafez Saeed. Mr. Saeed has been accused of responsibility for the 2008 attacks in Mumbai that killed more than 170 people.

The sincerity of Pakistan’s response was called into a question last week when the government of Khyber Pakhtunkhwa, which is headed by the political party of cricket-player-turned politician Imran Khan, who is widely believed to have close ties to the military, gave $2.5 million to Darul Aloom Haqqania, a militant religious seminary.

Dubbed a “jihad university,” Darul Aloom Haqqania, headed by Sami ul-Haq, a hard-line Islamist politician known as the father of the Taliban, counts among its alumni, Mullah Omar, the deceased leader of the Taliban, Jalaluddin Haqqani, the head of the Haqqani Network. Asim Umar, leader of Al-Qaeda in the Indian Subcontinent, and Mullah Akhtar Mansoor, Mullah Omar’s successor who was killed in a 2016 US drone strike.

Pakistani law enforcement officials told a court in Rawalpindi this week that students at the seminary had been involved in the 2007 killing of former prime minister Benazir Bhutto.The madrassah has denied any association with Ms. Bhutto’s assassination.

China’s refusal to back Pakistan in FATF constitutes recognition that the People’s Republic is walking a fine line as US pressure focuses on persuading Pakistan to crackdown on JuD, the Taliban and the Haqqani network.

China shielded Mr. Saeed, who has a $10 million US Justice Department bounty on his head, from sanctioning by the United Nations Security Council prior to the Mumbai attacks.

The People’s Republic has since repeatedly vetoed designation by the Council of Masoud Azhar, a fighter in the anti-Soviet jihad in Afghanistan in the 1980s and an Islamic scholar who is believed to have been responsible for an attack in 2016 on India’s Pathankot Air Force Station.

The militants, dressed in Indian military uniforms fought a 14-hour battle against Indian security forces that only ended when the last attacker was killed. Mr. Azhar was briefly detained after the attack and has since gone underground.

Men like Messrs. Saeed and Azhar serve China’s interest of keeping India off balance as well as the People’s Republic’s relations with the powerful Pakistani military, which it views as a more reliable partner than Pakistan’s unruly and rambunctious politicians.

The policy has, however, taken its toll and threatens to be increasingly risky. Despite a relative improvement, Pakistan has in recent years been wracked by political violence, some of which targeted China and its vast interests in the country. The country is also witnessing a wave of Sunni Muslim ultra-conservatism that breeds intolerance and, potentially, extremism.

Add the fact that China, increasingly concerned about the possibility of attacks in its north-western province of Xinjiang by Uyghur Islamic State fighters returning from Syria and Iraq to either the province itself or neighbouring Afghanistan and Tajikistan, risks being called out for a less than stellar attitude towards political violence.

Taken together, China’s contradictory Pakistan-related policy moves suggest that it may be graduating to a point at which it decides that it no longer can afford to play both ends against the middle. That would likely lead to China and the United States towing one line in Pakistan.