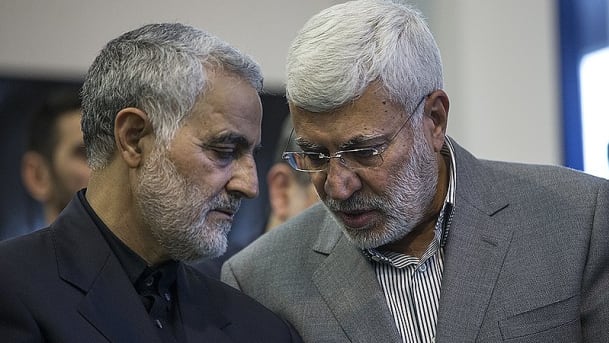 International law may not be a major consideration in debates about the US killing of Iranian military commander Qassim Soleimani, yet the legality of the assassination could prove to have long-term consequences for whether the rule of law or the law of the jungle dominates a new world order.

The Trump administration has asserted that killing Mr. Soleimani was necessary to avert an imminent attack on US targets that allegedly was being planned by Mr. Soleimani and Abdul Mahdi al-Muhandis, the leader of an Iranian-backed Iraqi militia, who also died in the attack.

The assertion, yet to be backed up by evidence, served to justify the attack and fend off allegations that the targeted killing violated both US and international law.

The implication was that Mr. Soleimani’s death would thwart an unspecified imminent attack and stop the Iranians in their tracks, an assumption that has little foundation in reality given Iran’s track record, most recently its refusal to buckle under following the imposition in 2018 of harsh US economic sanctions, some of the harshest ever imposed.

The notion that the killing of Mr. Soleimani amounted to rule of the jungle rather than rule of law was reinforced by assertions by Iraqi prime minister Adel Abdul Mahdi that he had been asked by Mr. Trump to mediate with Iran and that the Iranian military leader had been carrying Iran’s response to a Saudi initiative to defuse tension when he was assassinated.

Mr Abdul Mahdi’s allegation that Mr. Soleimani was involved in efforts to dial down tensions came in a debate in parliament in which lawmakers called in a resolution for the removal from Iraq of foreign forces, the bulk of which are American.

Mr. Abdul Mahdi’s assertion that Iran was responding to a Saudi initiative was all the more noteworthy given that the kingdom had reportedly recently put its indirect outreach to Iran on hold as anti-government protesters in Iraq and Lebanon targeted Iranian influence in their countries.

“Americans, once the most prominent proponents of international law as the regulator of relations between nations, have now fully validated the law of the jungle.  We are now likely to experience it,” said Chas W. Freeman Jr, a former career US State Department official in an email to a private mailing list.

Conservative commentator Robert Kagan warned in a book published last year, bemoaning America’s withdrawal as an enforcer of international law, a notion challenged by an array of critics, that chaos was the world’s historical norm. “The jungle will grow back, if we let it,” Mr. Kagan argued.

The sense that Mr. Trump, like many of the world’s civilizational leaders, has no regard for international law was evident, particularly to Iranians, in his threat to attack Iranian cultural sites if Iran retaliates for the killing of Mr. Soleimani.

Mr. Trump did not specify what he meant by cultural. Some analysts suggested the president may have been referring to symbols like the mausoleum of Ayatollah Ruhollah Khomeini, the founder of Iran’s Islamic republic.

With millions in the streets to welcome the return of Mr. Soleimani’s body, Iranians used the hashtag #IranianCulturalSites to respond to the threat by posting online pictures of mosques, museums, monuments, archaeological sites, and other Iranian architectural marvels.

Similarly, with Iraq perceiving the US strikes as a violation of the country’s sovereignty, Iraqis may, alongside Iranians, be one of the few who, perhaps self-servingly, factor adherence to international law in their debates.

In line with the comments of Messrs. Freeman and Kagan, the legal aspects of Mr. Soleimani’s killing take on a significance that goes far beyond the Middle East in an environment in which civilizational leaders like India’s Narendra Modi, China’s Xi Jingping, Russia’s Vladimir Putin and Myanmar’s Win Myint flout international law with impunity.

Iraqi assertions of a US violation of sovereignty echo Russia’s 2014 annexation of Crimea and intervention in eastern Ukraine. Mr. Trump has ignored United Nations Security Council resolutions by unilaterally recognizing Israeli annexation of East Jerusalem and the Golan Heights.

Mr. Mynt stands accused of ethnic cleansing by the United Nations that has prompted hundreds of thousands of Rohingya to flee to Bangladesh. Massive evidence documents Mr. Jinping’s authorization of the brutal repression of Turkic Muslims in the troubled north-western Chinese province of Xinjiang while Mr. Modi appears to be progressively disenfranchising his country’s Muslim minority.

For his part, Mr. Soleimani is believed to have been responsible for numerous incidents of political violence, including a 2012 attack on tourists in Bulgaria executed by a Lebanese suicide bomber. Five of the six casualties were Israelis.

Adopting the principle of might is right, civilizational leaders’ abandonment of international law, including guarantees of basic and minority rights, risks creating a global jungle in which wars, political violence, marginalization of ethnic and religious groups, and destabilizing mass migration contribute to rule of the jungle rather than rule of law.

So do Western approaches adopted almost two decades ago in the wake of the 9/11 attacks on New York and Washington.

Said at the time Robert Cooper, a British diplomat, former advisor to prime minister Tony Blair, current advisor to the European Commission on Myanmar, and a proponent of the doctrine of a new liberal imperialism who in 2011 defended Bahrain’s brutal repression of a popular uprising:

If the world has a civilized core that deserves lawful conduct, there also is a barbarous periphery that warrants “rougher methods of an earlier era… Postmodern states operate on the basis of laws and open co-operative security” but “in the jungle, one must use the laws of the jungle.”

Some two decades after Mr. Cooper wrote those words, the jungle rather than the rule of law threatens to become the norm, putting the global community on a dangerous and slippery slope.