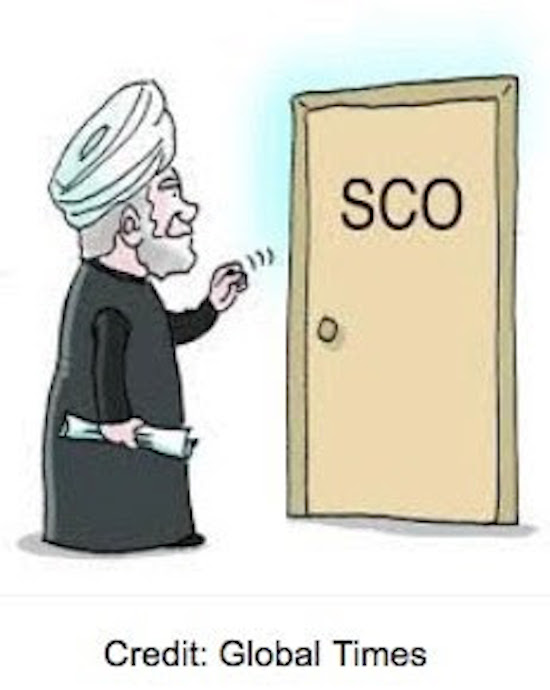 The Taliban takeover of Afghanistan may help Iran reduce its international isolation. At least, that’s what the Islamic Republic hopes when leaders of the Shanghai Cooperation Organization (SCO) gather in Tajikistan next weekend.

Members are admitted to the eight-member China-led SCO that also groups Russia, India, Pakistan, Kazakhstan, Uzbekistan, and Kyrgyzstan, by unanimous consensus. Iran, unlike its rivals in the Gulf, Saudi Arabia and the United Arab Emirates, has long had observer status with the SCO.

The Gulf states have so far kept their distance to the China-dominated regional alliance created to counter the ‘evils’  of ‘terrorism, separatism, and extremism” so as not to irritate their main security ally, the United States.

Acceptance of the Iranian application would constitute a diplomatic coup for Tehran and Iran’s new hardline president, Ebrahim Raisi. Mr. Raisi, a proponent of closer relations with China and Russia, is expected to make his first appearance on the international stage at the SCO summit in Dushanbe since having assumed office last month.

Iranian officials hope, perhaps over-optimistically, that SCO membership would help them counter the impact of harsh US sanctions. Ali Akbar Velayati, an international affairs advisor to Supreme Leader Ayatollah Ali Khamenei, has advised the Raisi government to look East towards China, Russia and India asserting that they could “help our economy to make progress.”

Similarly, it is not clear that membership would substantially reduce Iran’s international isolation or significantly improve its existing relations with other SCO members. What membership would do is effectively give Iran a veto should Saudi Arabia and the UAE choose to seek more formal relations with the SCO in response to a reduced US commitment to their security. The SCO is expected to grant Saudi Arabia and Egypt the status of dialogue partner at its Dushanbe summit.

Gulf confidence in the reliability of the United States as a security guarantor has been rattled by the chaotic US departure from Afghanistan as well as the recent removal of the most advanced US missile defence weapon, the Terminal High Altitude Area Defense (THAAD) system, and Patriot batteries from Saudi Arabia  as Yemeni Houthi rebels were successfully hitting targets in the kingdom.

China and Russia have in the past been reluctant to entertain full Iranian membership because they did not want to upset their delicately balanced relations with both Iran and its detractors. Policymakers, in the wake of Afghanistan, may figure that the two-year application process will give them time to prevent upsetting the apple cart.

To be sure, Tajikistan, in anticipation of a Taliban victory, first publicly promoted Iranian SCO membership in late May.

Zohidi Nizomiddin, Tajikistan’s ambassador to Iran, told a news conference in Tehran “that Iran to become a major member is among plans of the Shanghai Organization and if other countries are ready to accept Iran, Tajikistan will also be ready.” Tajikistan opposed Iranian membership in the past, accusing Iran of supporting Islamist rebels in the country.

Mr. Nizomiddin’s comments have since been supported by reports in Russian media. “There is a general disposition for this, there is no doubt about it,” said Bakhtiyor Khakimov, Russia’s ambassador at large for SCO affairs.

Russian analyst Adlan Margoev noted that “the SCO is a platform for discussing regional problems. Iran is also a state in the region, for which it is important to discuss these problems and seek solutions together.”

The Tajik and Russian backing of Iranian membership raises tantalizing questions about potential differences within the SCO towards dealing with the Taliban. Iran and Tajikistan, in contrast to Russia and China that have praised the Taliban’s conduct since the fall of Kabul, have adopted a harder, more critical attitude.

Nonetheless, Russia has in recent weeks held joint military drills with Tajikistan and Uzbekistan near the Tajik-Afghan border. Russia further promised to bolster Tajikistan by supplying weapons and providing training.

Tajikistan is believed to support Tajik rebels in the Panjshir Valley in northern Afghanistan that last week lost a potentially initial first round of fighting against the Taliban. It remains unclear whether the rebels will be able to regroup. Tajiks account for approximately one-quarter of the Afghan population. As the

Tajikistan and Iran agreed in April to create a joint military defence committee that would enhance security cooperation and counter-terrorism collaboration.

Iran recently changed its tone regarding Afghanistan after the Taliban failed to include a Hazara Shiite in their newly appointed caretaker government. Hazaras, who account for 20 per cent of the Afghan population, have reason to fear Taliban repression despite the group’s protection last month of Shiite celebrations of Ashura, the commemoration of the Prophet Moses’ parting of the sea.

Ali Shamkhani, the secretary of Iran’s Supreme National Security Council, took the Taliban to task for  “ignoring the need for inclusive government, foreign intervention and the use of military means instead of dialogue to meet the demands of ethnic groups and social groups that are the main concerns of the friends of the Afghan people.” Mr. Shamkhani was referring to alleged Pakistani support for the Taliban in the battle for Panjshir.

Supporters of Iranian membership may figure that affairs in Afghanistan will have been sorted out by the time the application procedure has run its course with Afghanistan well on its way towards reconstruction. That may prove to be correct. By the same token, however, so could the opposite with an Afghanistan that is wracked by internal conflict and incapable of controlling militants operating from its soil.

The SCO may in either case want Iran to be in its tent to ensure that all of Afghanistan’s neighbours, as well as regional powers Russia and India, are seated at one table. Mr Margoev, the analyst, argued that “just like other countries in the region – (we should) sit at the same table with Iran and not call it a guest from outside.”