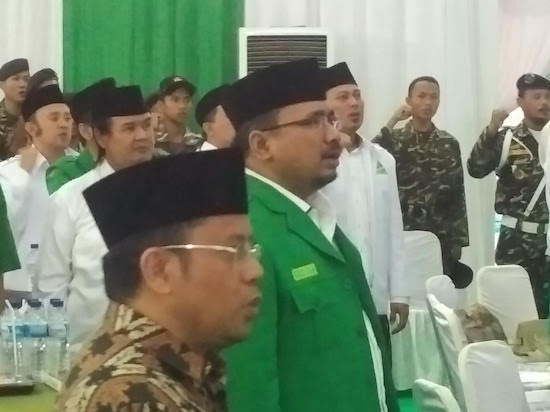 Two conferences this week spotlight the Muslim world’s struggle to come to grips with extremism and militancy. The conferences, the Arab-Islamic-American summit in Riyadh and a gathering in East Java of youth leaders of Nahdlatul Ulama (NU), the world’s largest Muslim movement, laid bare the difficulty of reforming cultures in the battle against extremism, called into question the commitment of Muslim states to combat radicalism and political violence, and put on display US President Donald J. Trump’s prioritization of commerce at the expense of principle.

Saudi Arabia used US President Donald J. Trump’s visit to the kingdom to drive its anti-Shia and anti-Iran agenda. Mr. Trump and Muslim leaders turned a blind eye to Saudi Arabia’s role barely two weeks before Mr. Trump’s arrival in blocking his administration’s proposal to impose United Nations sanctions on the Saudi branch of the Islamic State (IS).

A majority of world leaders, including many of Muslim nations, condemn Iranian policies, but view the Islamic State as the world’s foremost terrorist threat. Supporters of IS celebrated Monday’s attack on an Ariana Grande concert in Manchester in which at least 22 people were killed and 59 others wounded. Claiming responsibility for the attack, IS described the concert as a Crusader gathering.

Saudi Arabia blocked the sanctions to ensure that the world’s focus would remain on Iran, which it sees as the world’s leading state sponsor of political violence. Sanctioning of the Gulf branch of the Islamic State moreover risked drawing attention to the fact that the kingdom sees militant Islamists as useful tools in its proxy wars with Iran in Iraq, Syria and Yemen.

In Yemen, Saudi Arabia’s intervention has given IS rival Al Qaeda in the Arabian Peninsula (AQAP) a new lease on life. Prior to the war, AQAP had been driven to near irrelevance by the rise of IS and security crackdowns.

In a report in February, the International Crisis Group (ICG) concluded that AQAP was “stronger than it has ever been… In prosecuting the war, the Saudi-led coalition has relegated confronting AQAP and IS to a second-tier priority… Saudi-led coalition statements that fighting the group is a top priority and announcements of military victories against AQAP in the south are belied by events,” the ICG said.

In a statement issued by the Riyadh summit attended by representatives of 55 countries, the leaders vowed “to combat terrorism in all its forms, address its intellectual roots, dry up its sources of funding and to take all necessary measures to prevent and combat terrorist crimes.”

It “welcomed the establishment of a global centre for countering extremist thought to take base in Riyadh, and praised the centre’s strategic objectives of combating intellectual, media and digital extremism and promoting coexistence and tolerance among peoples.”

The statement made no reference to Saudi-inspired ultra-conservatism that propagates a supremacist worldview, encourages prejudice against Muslim and non-Muslim minorities and that according to many policymakers and analysts, enables an environment that potentially breeds militancy.

In a nod to Saudi Arabia’s four-decade long proxy war with Iran that increasingly appears to enjoy Mr. Trump’s endorsement, the statement paid lip service to confronting “sectarian agendas,” but linked it to countering “interference in other countries affairs,” a reference to Iranian support for groups like Lebanon’s Shiite Hezbollah militia, the Houthis in Yemen, Iraqi Shiite militias fighting IS alongside the Iraqi military, and Syrian President Bashar al-Assad.

The statement avoided calling on Sunni Muslim ultra-conservative political and religious leaders to refrain from contributing to sectarian strife. Saudi Deputy Crown Prince Mohammed bin Salman on the eve of the summit ruled out dialogue with Iran on the grounds of its religious beliefs.

Prince Mohammed, turning its power struggle into an existentialist sectarian battle, charged that Iran was planning for the return of the Imam Mahdi (the redeemer) by seeking to control the Muslim world. Shi’ites believe that the Mahdi was a descendent of the Prophet Mohammed who went into hiding 1,000 years ago. They trust that he will return to establish global Islamic rule before the end of the world.

The NU conference held in the Bahr Ulum Islamic Boarding School Foundation in Jombang in East Java, the movement’s birthplace, could not have been more different from the summit. The two-day gathering brought together top NU leaders and young activists who appeared to be driven by a sense of apocalypses if they failed to counter extremism in Indonesia.

The activists’ commitment contrasted starkly with that of political leaders in Riyadh who appeared motivated by political opportunism, power-driven conflict, and a passion for a photo-op that positions them as being in the forefront of the struggle against the scourge of political violence. (For transparency, this writer was invited to address the conference).

Attending the NU conference were members of Barisan Ansor Multipurpose Nahdlatul Ulama (Banser), an autonomous security unit within the movement, that confronts militants. In recent incidents, Banser intercepted convoys of busses of Hizb-ut-Tahrir (HuT), a pan-Islamic group that advocates a global caliphate.

Banser commander H. Alfa Isnaeni recalled one intercept of a convoy ferrying HuT supporters to a rally. A majority of people on the busses were villagers. They were told by military officers, who paid them to board the busses, that they were travelling to a religious gathering. “Hizb-ut-Tahrir has successfully targeted the military,” a NU leader said.

In a draft statement scheduled for publication on Wednesday, the NU conference warned that Muslims need to bridge the gap between teachings of Islamic orthodoxy and the contemporary Muslim reality. In a reference to Saudi-inspired ultra-conservatism, the draft asserted that “social and political instability, civil war and terrorism all arise from the attempt, by ultra-conservative Muslims, to implement certain elements of fiqh (Islamic jurisprudence) within a context that is no longer compatible with…classical norms.”

The statement charged that “various actors—including but not limited to Iran, Saudi Arabia, ISIS (another acronym for the Islamic State), Al-Qaeda, Hezbollah, Qatar, the Muslim Brotherhood, the Taliban and Pakistan—cynically manipulate religious sentiment in their struggle to maintain or acquire political, economic and military power, and to destroy their enemies. They do so by drawing upon key elements of classical Islamic law (fiqh), to which they ascribe divine authority, in order to mobilize support for their worldly goals.”

In a frontal attack on Saudi Arabia, the statement, issued by a group that was founded almost a century ago in opposition to Wahhabism, Saudi Arabia’s strand of Sunni Muslim ultra-conservativism, argued that “it is false and counterproductive to claim that the actions of Al-Qaeda, ISIS, Boko Haram and other such groups have nothing to do with Islam, or merely represent a perversion of Islamic teachings. They are, in fact, outgrowths of Wahhabism and other fundamentalist streams of Sunni Islam…,” the statement said.

“For more than fifty years, Saudi Arabia has systematically propagated a supremacist, ultraconservative interpretation of Islam among Sunni Muslim populations worldwide… The Wahhabi view of Islam—which is embraced not only by Saudi Arabia and Qatar, but also by al-Qaeda and ISIS—is intricately wedded to those elements of classical Islamic law that foster sectarian hatred and violence. Wahhabism is characterized by extreme animosity towards Shi’ites. It is also characterized by antipathy—at times violent—towards Christians, Jews, Hindus, Buddhists and Sunni Muslims who do not share the Wahhabis’ rigid and authoritarian view of Islam… Saudi opposition to Iran, ISIS and al-Qaeda does not and should not absolve it from responsibility for promoting the very ideology that underlies and animates Sunni extremism and terror,” the statement went on to say.

There is little doubt about the statement’s sincerity and its bold willingness to focus Muslim discourse on the need to clean up Islam’s own house. The conference’s proceedings nonetheless laid bare the fact that NU still has its own demons to fight.

Conference participants took no notice and failed to counter a popular Islamic scholar who asserted in remarks pockmarked by sexist jokes that “digitalisation, globalization and hedonism is the immoral path that Jews and Christians want us to follow.” To be fair, the moderator of the scholar’s panel, a human rights activist, took him to task on his gender remarks but not on his references to Jews and Christians.

Similarly, remarks by a NU leader that appeared to differentiate between, on the one hand, the use of religion by Saudi Arabia and Qatar, the world’s only other Wahhabi state, albeit one that practices a more liberal interpretation of the sect’s teachings, and Iran on the other, went unchallenged.

The NU official couched his assault on the Gulf Arabs in terms of nation states that exploit Islam opportunistically and warned that they need to be confronted because they “want to destroy us.” Discussing Iran however, he referred to Shiism without qualification and cautioned that “if we don’t fight back they will behead us.”

To confront extremism, Muslim political leaders and religious groups will not only have to stand up to political manipulation of their faith, but also to prejudices, conspiracy theories based on ingrained bias, and implicit as well as explicit supremacism that have long been common currency across the Muslim world. It is a jihad that is a lot more difficult than paying lip service and playing politics, but is a prerequisite for effective countering of extremism and political violence.