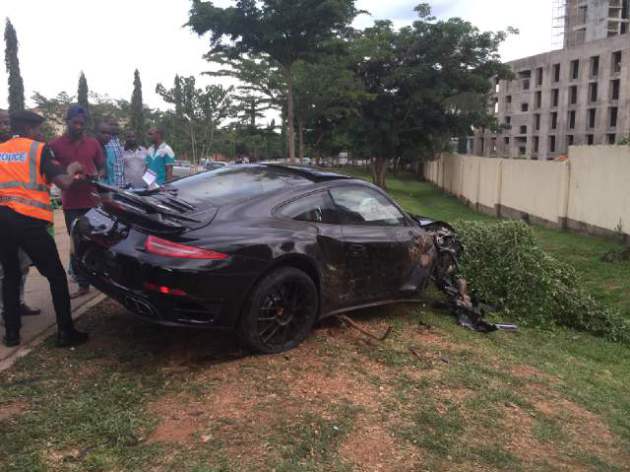 Son of the former Attorney General of the Federation and Minister of Justice, Mohammed Adoke, on Sunday crashed a 2015 Porsche 911 Turbo into a fuel queue in Abuja, leaving one person seriously injured.

The younger Adoke and his friends, who were driving a Mercedes-Benz C class were racing in the city centre of Abuja when he lost control around Maitama roundabout leading to Transcorp Hilton hotel and crashed into a fuel queue.

The 2015 Porsche car which our findings reveal cost a minimum of N40 million specifically ran into a 1998 Toyota Camry car queuing up to buy fuel at a filling station nearby. In the process, the driver of the Camry car sustained injuries and was unconscious until he was rushed to the hospital.

Eye witness at the scene of the accident who described the situation however said it took a while before the injured driver of the Toyota Camry was attended to even though he was bleeding profusely. The young Adoke, whom the eye witness said cannot be more than 20 years of age drove off the scene with his friends almost immediately after the accident, as they were more concerned about the damages done to his own car that the man who was on the ground with injuries. “It was after a while some of the friends returned and took the injured man to the hospital”, the witness said.

The witness said at this time, the crowd who had gathered around the scene of the accident were already angry and infuriated as they almost engaged the friends in a brawl.

According to the witness: “Everybody were angry that these small boys with expensive cars crashed into a man waiting to fuel his car, got him injured and yet didn’t show concern for his state of health.”

“They even brought policemen to the scene of the incident and the policemen were also more concerned with the damaged Porsche car probably because they know the boys are children of rich men.”

He added that during the process of the crowd charging at friends of the young Adoke, a woman suspected to be the mother of the boy and wife to the former Attorney General arrived the scene in a 2015 BMW X6 jeep asking “where is Abdul, I hope he’s ok?”

However, sensing that her presence would further infuriate the crowd especially if they discover that she is the wife of the former Justice minister and the boy is the son, the friends of the young Adoke prevented her from getting close to the scene and she immediately drove off after satisfying that her son in unhurt.

But while the man had been taken away, the crowd were unsure of where he was taken to as the friends refused to speak on his where about. This almost led to another round of trouble until they opened up that he was taken to Maitama General Hospital. Some persons thereafter volunteered to visit the hospital to ensure that he was being attended to.

Below are videos from the scene of the accident. The second video shows the woman suspected to be the wife of the Justice minister being shielded away from the scene.