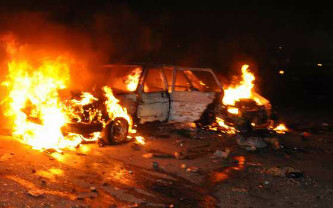 Apparently the Jos suicide bomber killed himself and three others and injured another three according to NEMA updates. He was on his way to attempt to bomb the soccer viewing center when his car blew up before he could get close enough to blow it up.

The explosion, image above was so loud, shocks were felt several kilometers away.

This was the second bombing in Jos in just four days.