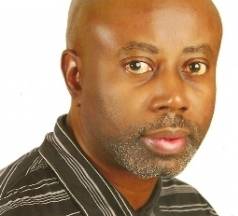 A Nigerian activist who was arrested on Sunday evening said he was told that his arrest was because he wore a shirt with the inscription: ‘We Are All Biafrans.’

PREMIUM TIMES reported how Mr Onumah was arrested at the airport upon his arrival from Europe.

He was arrested at about 5:00 p.m. on Sunday and released about five hours later.

He arrived via a Lufthansa airline and was waiting for his luggage when SSS officials accosted him.

Mr Onumah spoke to PREMIUM TIMES late on Sunday after his release.

“I was arrested for wearing the T-shirt because the SSS said it is capable of causing disaffection in the country.

”They said some people had issues and had contacted them (SSS) whether I was a part of a group that was planning against the country,” he said.

The inscription on Mr Onumah’s shirt, We Are All Biafrans, is the title of a book he wrote about Nigeria.

The book, a collection of essays by the journalist, focused on the need to restructure Nigeria in order to be able to build a united country.

Biafra is also the name the South-eastern part of Nigeria adopted during the Nigerian civil war, 1967-1970. There are still many individuals and groups in the South-east clamouring for an independent Biafra republic. One of them is an outlawed group, IPOB, led by a fugitive, Nnamdi Kanu.

Mr Onumah has no known links with any of the Biafran groups and has opposed the breakup of Nigeria, calling instead for a restructured country where power is devolved to its constituent parts.

During the hours Mr Onumah was arrested, many civic groups and organisations called for his release.

The Socio-Economic Rights and Accountability Project (SERAP) called for “the immediate and unconditional release of Chido Onumah, journalist and human rights defender.”

In a statement Sunday night, the Deputy Director of SERAP, Kolawole Oluwadare, said, “This is yet another clear signal of Nigeria’s distancing from international human rights law. We urge the Nigerian authorities to immediately and unconditionally release all other journalists and activists currently in detention for their legitimate exercise of the right to freedom of expression.”

The Union of Campus Journalists, Nnamdi Azikiwe University, Awka, also condemned the arrest of Mr Onumah, who is the patron of the union.

The SSS has not spoken formally on the reason for arresting Mr Onumah and there are no indications it plans to file charges against him.