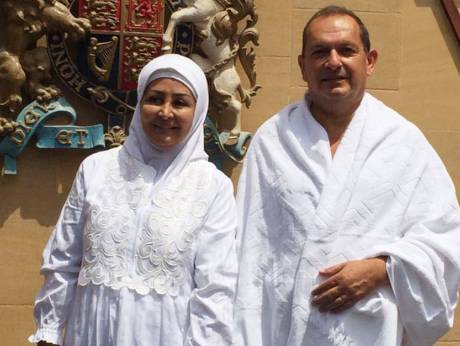 Simon Collins, the British ambassador to Saudi Arabia, has confirmed his conversion to Islam after a lifetime of diplomatic work in Muslim countries, including Iraq and Syria.

He was pictured with his wife, dressed in the traditional white robes worn by pilgrims in a photo shared by Saudi women’s rights campaigner Fawziah al-Bakr via social media on Monday.

Collins is the first British diplomat to perform the revered pilgrimage to Mecca, known as Hajj.

“The first British Ambassador to the Kingdom of Saudi Arabia to do the pilgrimage after his conversion to Islam: Simon Collins with his wife Huda in Mecca. Alhamdulillah [Praise be to Allah],” his wife, Huda Mujarkesh, a Syrian Muslim tweeted.

Collins has been posted to Riyadh since 2015 after fleeing Syria where he was Britain’s representative until the civil war there escalated in 2011/12. He had previously worked as the UK’s ambassador to Qatar and part of the diplomatic corps in Bahrain, Tunisia, India, Jordan and Dubai.

RT-The diplomat thanked well-wishers on Twitter after news of his conversion emerged, saying he had decided to join the Islamic faith “after spending 30 years in Muslim societies.” Among those to congratulate him were two members of the Saudi royal family.

As part of his conversion and pilgrimage, Collins can now use the honorific granted those who’ve visited Islam’s holiest city, giving him the title Ambassador Haji Collins.

Officials at the East London Mosque told the Times they hoped Collins would be “able to share his recent experiences from the hajj with his non-Muslim colleagues at the British embassy.”

They added that his “unique position” could prove vital in the relationship between Islam and the non-Muslim world.

Collins is, however, not the first British diplomat to convert to Islam. The writer and diplomat Charles le Gai Eaton converted to Islam in the 1950s before serving in India, Trinidad and Ghana.