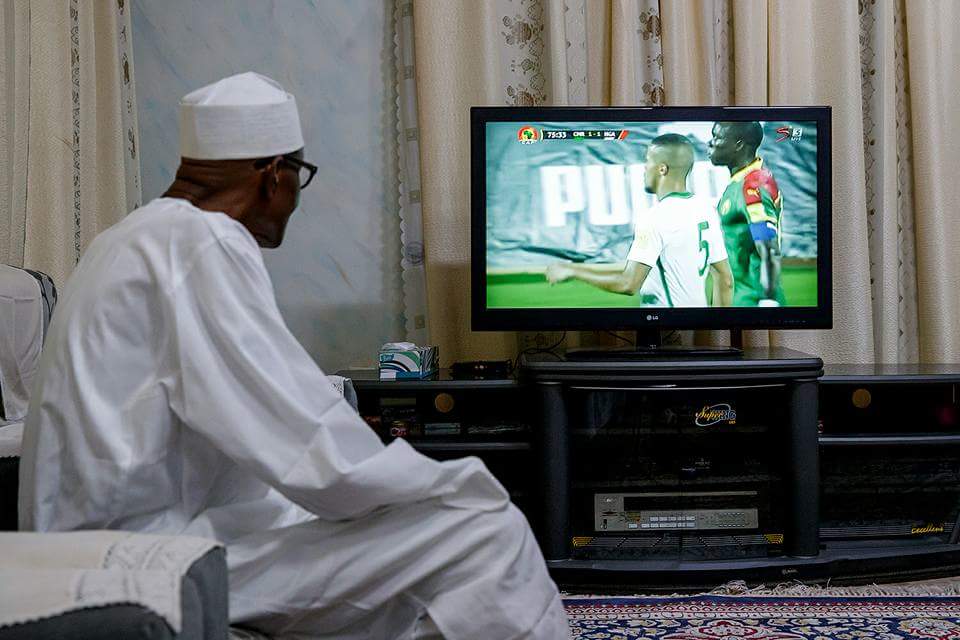 When you think you have seen it all and nothing from the presidency could surprise you any longer, then you are hit with even a more mundane celebration of oddities by Buhari and his team members.

Nothing is more ludicrous and banal than a senior special assistant to the president of Nigeria on media and publicity condescending so low as to brazenly revel and make a national issue of Buhari’s TV set at his private home in Daura because, according to him, it proves the president’s “simplicity, honesty, incorruptibility and personal integrity”.

In a nation where university lecturers are on a nationwide strike with other staff unions soon to join them leaving our young ones stranded and unsure of what the future holds for them and where resident doctors have also embarked on nationwide strike action leaving patients unattended to even as many suffer avoidable slow and painful death as a result; a nation that is so sunk in economic hardship, social dysfunction, political uncertainty and combustible disquiet in the presidency as epitomized by the support for another candidate other than Buhari in the coming 2019 general elections by the minister of women affairs, it is most unfortunate that what a high ranking presidency official decided to treat Nigerians to is a tragi-comedy of antiquities of some sort from Daura.

That essay by Shehu exemplifies the mindset of the presidency: two years after assuming power, the Buhari administration is still in campaign mood, promoting self over national affairs while still focusing on the opposition as the reason for their monumental failure.

While the crux of Garba Shehu’s essay was to celebrate Buhari’s 32” television, “the TV stand, the curtains, chairs and about every item visible to the eye in those pictures” which appeared in the social media showing the president watching the FIFA World Cup qualifying match between Cameroun and Nigeria, let us quickly remind him and his ilk that it was the same stunt that was pulled by his principal when a picture of him taking “an austere” beverage made from small sachets of Milo were deliberately displayed for photographs.

That picture made some easily excited Nigerians go agog in praise of the arrival of a “simple”, “honest” and “incorruptible” president as if that was enough to put food on their table. Two years down the line, a lot of those deceived by such PR stunts have lost their jobs, some have had to close down their factories, packed up their businesses, withdrew their children from school, sold their valuables in order to survive, while others have suffered the misfortune of being murdered and buried in mass graves by the same government they chanted “Sai Baba” for in the run up to the 2015 general elections. Worse still, a good number of these people have taken the easy way out of their APC-imposed sufferings by taking their lives! Unfortunately, we are on that path again! The path of democracy turned to “pictocracy” which is the government of pictures, by pictures and for pictures. Garba Shehu should be pitied if he cannot see the hypocrisy in a man who uses a 32” TV set, an old TV stand etc as a president but rushed to build a helipad in his home town of Daura.

As the simple and austere man that Shehu paints the president, one would have thought that Buhari should be flying in commercial airlines, board commercial vehicles at Jabi Motor Park whenever he is travelling to Daura from Abuja, patronize our General Hospitals instead of wasting a humongous part of our commonwealth on himself while on medical tourism in the UK, educate his children in Nigeria, his wife go about with locally made wristwatches, Aba-made bags and shoes etc. the fact is that the hood does not make the monk.

When a presidency indulges in the pedestrian narrative of its activities, it is because it lacks anything to showcase as a positive outcome of its feeble efforts towards improving the lives of the people.

It is the same bug of celebrating nothing as something in the presidency that also compelled Bashir Ahmad, the president’s personal assistant to tweet the president’s picture alighting from the presidential jet with his wife behind him on their way from Daura after the Sallah holidays and labeled it “Class”.

Many twitter users questioned the rationale behind such showing asking if alighting from a plane bestows on one any particular class or other status. One highly respectable user, @akaebube, aptly captured it when he tweeted in response to @BashirAhmaad thus: “Tough working for a government with no visible achievements. You just have to make do with showcasing ‘coming down from a plane’ as achievement”!

Another user, @Queen_Kas, responded to Ahmad rather sarcastically thus: “I guess as opposed to coming down with her (Aisha Buhari) head”.

In a society as troubled as ours, government officials should actually have been very busy organizing press conferences, granting press interviews, making press releases, meeting critical stakeholders and the sections of Nigerians wherever and whenever possible explaining, clarifying, defending and promoting government plans, policies and actions being taken to move Nigeria forward.

Essays from such officials should border around matters of national importance, and there are many of them to write.

Instead of wasting precious time and efforts dwelling on a TV model of the president, Shehu should have utilized such time and resources to write essays on why ASUU, resident doctors and those planning to go on strike soon should have a rethink and cooperate with government. He has rather exposed Buhari as a man left behind by time because TV sets of these days are now packed with a lot of functions that can even make one use them for other very useful purposes apart from just watching programmes. But because our president is limited in capacity, it is given that his gadgets must also be of the type limited in functions.

Lastly, when we have a government bereft of ideas and scarce of achievements, even otherwise fairly intelligent people like Garba Shehu and Femi Adeshina would be forced to resort to crass tactics to justify their pay. Celebrating Buhari making notes on a mud slate rather than on an electronic device might just be the next picture to be celebrated by Garba Shehu in another episode of the “pictocrats”. Till then, let the president eat with rubber spoons and his guests with rubber fork so that our economy will improve! Hypocrisy!

This opinion article, originally titled “Still on Buhari’s 32” TV and the Epistle according to Garba Shehu”, was written by Jude Ndukwe