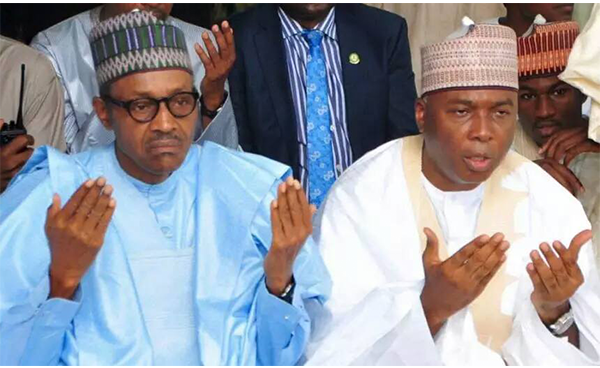 Decisiveness is a trait all great leaders possess.President Buhari must create time to ponder and move fast on two issues that may appear light on the face but have the tendency to spiral out of control.First is Nnamdi Kanu’s continued detention after being granted bail and second, the weighty allegations against Justice Danladi Umar; the Chairman of the Code of Conduct Tribunal.

Few people remember today that Boko Haram floated into our consciousness only after an altercation with the police on the way to bury a dead member of theirs.I don’t think anyone would need any expert analysis before citing about 3 stages where the threat could have been effectively exterminated.Having watched how the Yar’adua Government underestimated the Boko Haram and President Jonathan admitting he did as well, the importance of caution in the Nnamdi Kanu saga cannot be overemphasized.

What started as some jester broadcasting from a shack in God-Knows-where could very well end up in a war we could easily have avoided.While I would say I don’t agree with the Magistrate Court’s decision to grant bail, I fault the decision of the authorities to still keep him in custody.My disagreement with the court’s ruling is premised on decisions like the one in DOKUBO-ASARI V FEDERAL REPUBLIC OF NIGERIA(2007) ALL FWLR (Pt.375) 588 where Justice Mohammed of the Supreme court held thus:

‘Where National Security is threatened or there is the real likelihood of its being threatened, human rights or the individual rights of those responsible take second place…The corporate existence of Nigeria as a united, harmonious, indivisible and indissoluble sovereign nation is certainly greater than any citizen’s liberty or right. Once the security of this nation is in jeopardy and it survives in pieces rather than in peace, the individual’s liberty or right may not even exist’.

Part of my reason for quoting from the Court’s ruling in that case is to help highlight the magnitude of this situation.Our National Security was already being threatened when Kanu was preaching divisiveness and disharmony in his container and the President wasn’t appointing Ibos prior to the release of his Ministerial list.We must thread with caution.

Continuing to detain a man who has been granted bail and refusing to produce him in court when required to do so appears to me to be deliberately inciting his followers and winning him more sympathizers.Last I checked there were ‘Biafrans’ from as far as Sweden soiling the image of the Federal Government in the name of Protests.In all honesty, the Government cannot absolve itself of any blame.The protests staged in Eastern States that have already resulted in casualties could escalate to killing non-ibos and trigger reprisal killings across the nation.

The President, having witnessed the Civil war first hand,should know how precarious a situation this is and must atone for looking the other way as Commander-In-Chief by ordering his release or at least ensuring his attendance at the next court date.The consequences of Kanu’s continued detention are a clear indicator of what could be lying ahead of us.We are still fighting Boko Haram 8 years later.A word is enough for the wise.

The Justice Danladi Umar situation, though of lesser magnitude in the scheme of things is also one that calls for concern.As Chairman of the Code of Conduct Tribunal which has been in the news lately (thanks to the Saraki trial), it is no suprise that his past is under close scrutiny at this point in time.
The allegations have been pouring in from left, right and centre which I must say makes it understandable for the President to thread with caution but it is also the more reason the President should move fast.Who knows when somebody would hit another bull’s eye?

Shots don’t come cleaner than a letter by his fellow benchers of the Code of Conduct Tribunal urging the Former President to investigate him as they find sitting with him on the same tribunal embarrassing following an alleged N10 Million bribe.The evidence against him can at best be described as circumstantial but it is enough to convict him in the Court of Public Opinion where judgment is based on facts only and there are no legal technicalities or burden of proof.

Allowing a man like that continue as Chairman of the CCT demeans President Buhari’s anti-corruption stance.It contradicts all PMB stands for.

The President can be cut some slack on the ground that the petitions and allegations could have been orchestrated by corrupt Politicians to destabilize the War against Corruption but the evidence of dirty dealings is overwhelming.Perhaps the EFCC threw his PA under the bus because Jonathan later felt he needed people like Umar to safeguard the interests of his dirty cronies.Who knows what anyone else could dig up and when?

A lot of politicians are reportedly been lined up for prosecution in his tribunal and my fears are two if he is still in charge.Firstly, we don’t know what a dirty politician or his allies could find out if they continue from where the digging stopped and Secondly,you know what they say about a thief-Beat him today and he would still dip his hand in the cookie jar tomorrow if its still there.
Umar is innocent until proven guilty but the merits of removing him from that seat far outweigh the demerits of doing so.

Fortunately, the Senate has beaten President Buhari to ordering a probe and if the verdict is damning, then he shouldn’t hesitate to ease him out as it is his call to make subject to their ratification.And it would be most appropriate for the ‘new’ EFCC to conduct proper investigations that won’t end where Umar’s phone number which he is alleged to have used to communicate with the bribe-giver and claimed to have lost is to be subjected to a forensic test.

The Senators are doing what he should have ordered done a long time ago and whether or not, the probe is a revenge mission, it serves the best interests of the President and Nigerians at large even more than it does theirs.

The process of kicking Danladi Umar out should have been kick started by the President himself earlier and I hope to God he won’t spurn the chance to do away with him if the Senators present him a chance in the name of fighting back.
A stitch in time saves nine.The time to act is now.