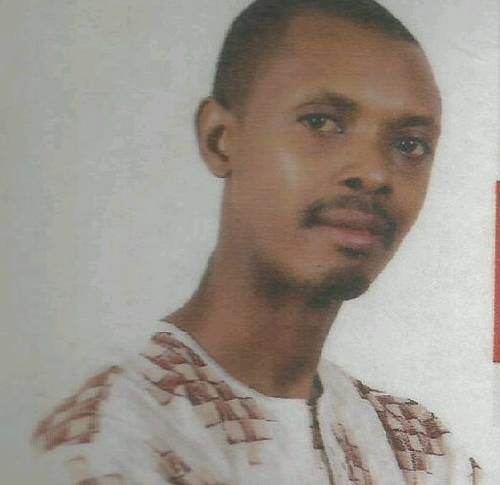 A student of the National Open University of Nigeria, Abdulmalik Sa’idu, has been languishing in a police cell for over 20 days on the orders of the Governor of Katsina State, Ibrahim Shema, for posting details of an alleged fertiliser scam in the state on his Facebook timeline.

This was disclosed to PREMIUM TIMES by Mr. Sa’idu’s family and lawyer.
Abdulmalik was first invited to the Katsina Government House on August 28 by a phone caller who claimed he had a message for him.

But when Abdulmalik arrived at the governor’s office, he was promptly arrested, handcuffed and taken to Batagarawa Police Station just outside the state capital, Katsina, and detained on the orders of Mr. Shema’s aide-de-camp, Shehu Koko, a Deputy Superintendent of Police, DSP.

According to his father, Maiyawo Sa’idu, while the young student was not charged with any offence, he was accused of cloning the governor’s phone number and using same to call the state Commissioner for Local Government and Chieftaincy Affair, Sani Makana, with instructions that Mr. Makana deposit N3 million in his account.

Mr. Sa’idu said his son was innocent. He said if indeed Abdulmalik cloned the governor’s number to dupe a commissioner he wouldn’t be tricked to come to the Government House to be arrested.

“I think they are trying to frame him. I know my son cannot clone the governor’s number and call a commissioner to put three million into his account,” Mr. Saidu told PREMIUM TIMES.

He said Abdulmalik was arrested because he posted details of an alleged fertiliser scam by the governor on his Facebook page.

Mr. Saidu said prior to his son’s illegal detention, some officials of the state government had warned his son to desist from criticising the governor on Facebook.

The report accused the police of running “torture chambers” where detainees are abused for money or for confessions.

The police dismissed the allegations as “falsehoods and innuendos” saying the Force does not tolerate torture and that where it occurs, officials responsible are sanctioned.

But Abdulmalik’s arrest points to how widespread arbitrary arrests have remained even for the flimsiest of reasons. Many such arrests are effected on the directives of senior state officials, including governors.

In November 2012, a civil servant in Bauchi State, who questioned the financial integrity of the governor, Isa Yuguda, was immediately dismissed on direct orders of the governor.
In a Facebook post, Abbas Faggo had accused Mr. Yuguda of corruption, questioning the source of funding of the governor’s son’s weding which took place then.

Mr. Faggo was first suspended, and later arrested by the police. He was eventually arraigned before the Chief Magistrate of the state for the same offence. The judge, Adamu Madaki, struck out the case because “it was not properly filed.”

A letter terminating Mr. Faggo’s appointment, signed by one Ibrahim Shehu for the Head of Service of the State, said his services were no longer needed.

Barely a year after the Bauchi case, the Bayelsa State governor, Seriake Dickson, ordered the arrest of a businessman, Tonye Okio, for also criticising him on Facebook.

Mr. Okio, who was also a former Abuja Liaison officer for Bayelsa State, was arrested on October 26 at his Abuja residence. He was subsequently blindfolded and driven to Bayelsa by the Special Investigation Bureau, SIB.

The police also stripped Mr. Okio of his mobile gadgets and all postings on his Facebook account about Mr. Dickson were deleted.

Two days after his arrest, the Bayelsa police released a statement that Mr. Okio was arrested for “seditious publications against the Bayelsa governor”.

“This is to inform the general public and the good people of Bayelsa State in particular that the Bayelsa police command has succeeded in apprehending one Tonye Okio ‘M’ of Otiokpoti, Ogbia Local Government Area, Bayelsa State for the offence of seditious publications,” the police said in a statement. “The suspects whose syndicate members are now at large will be appropriately arraigned in court when investigation is complete.”

Police detained Mr. Okio for 10 days without trial before his lawyer filed a case at a Bayelsa High Court demanding his fundamental rights be enforce and that he be charged to court if he has indeed done anything wrong.

A day before the case was to be heard, the police charged Mr. Okio before a Magistrate Court for defamatory publication against the Bayelsa governor. After taking his plea, the Magistrate Court adjourned the case to November 21 for trial.

In Katsina, Mr. Sa’idu said he is worried about the wellbeing of his son after relatives were abruptly stopped from seeing him a week into his being detained.

Akin Ajayi, a Kaduna based lawyer, who is helping the family on the case, said the DPO of Batagarawa Police Station told him he had order from above not to release Abdulmalik on bail.

“I spoke to the DPO of the Batagarawa Police Station and he said he cannot do anything because it was an order from above,” he said.
Mr. Ajayi said as a lawyer, the governor should realise that he was breaking the law by holding the boy beyond 48 hours on a “frivolous claim.”

“The governor is a lawyer, his deputy is a lawyer and the attorney general is a lawyer and they all know that it is wrongful of them to arrest someone and keep him in detention for more than 48 hours on a frivolous claim that the boy cloned the governor’s number and wanted to collect N3 million and some other concocted allegations which are not proven.

And they now kept the boy incommunicado. His family cannot reach him, and these days because of the security situation in the north, he could be killed,” he added.

Mr. Ajayi warned that if Abdulmalik was not released he was going to send a petition to the National Human Rights Commission and the Inspector General of Police.

The DPO of Batagarawa declined to talk to PREMIUM TIMES after he was asked on whose orders Abdulmalik was being held beyond the 48 hours stipulated by law.

The Police PRO, Abubakar Sadiq, also refused to return several calls after promising to find out the details of the case.