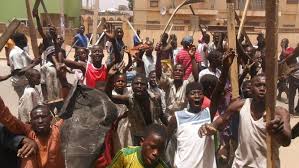 What image comes to your mind when you hear that a Christian Group is coming to town and what would be your reaction? In all probability, it would be the image of a boring group of Scripture Union adherents in long, loose fitting attires, probably made of dull colours.

And if the group is of the Pentecostal bent, in sharp, well cut suits. Either group would wield the Bible like a sword and use honeyed words to pierce our conscience. So the only wound that could be inflicted on us would be spiritual at best. There is no physical harm whatsoever and we can choose to ignore them.

Now, what image comes to your mind these days when you hear that an Islamic group is coming to town? Your mind races ahead to the violence that could be unleashed on the community as you think of an unwieldy group carrying bayonets and cutlasses. You immediately make a mental note to stay at home or if possible, leave town for them because you know the harm that could be done goes beyond the spiritual. You also know you cannot choose to ignore them.

Many of us who have Muslims as friends or even benefactors, know that an average Muslim is peace loving. Those of us who grew up and went to school with Muslims know there is really no difference between them and us. They are as good or as bad as the rest of us. But tell that to a man who has never had to live with a Muslim; whose knowledge of Islam is what he sees on TV and reads on the internet. It would seem to him that all the flash points of the world are fuelled and managed by the Islamic faithful.

Boko haram, Al Shabbab, Al Qaeda and now the ISIS are all variants of Islamic terror groups. They have links with each other and compete with each other in brutality and viciousness. Even animals do not kill so wantonly, so needlessly. And they kill, they say, in the name of Allah.

It would be completely misleading and wrong to call these people Muslims just as it would have been wrong to call Adolf Hitler and Joseph Stalin Christians. Or Chairman Mao a Buddhist. Theirs were twisted minds who managed to find ideological pegs for their atrocities.Unfortunately, unlike Hitler, Stalin or Mussolini who really didn’t hide under Christianity, their modern day clones claim to be fighting for Allah. Allah does not need anybody to fight for Him. The Creator of the universe does not need anybody to avenge for Him. He says clearly ‘Vengeance is mine’. So who are these people fighting for?

It is not a coincidence that they thrive on chaos and in areas where law and order have broken down. That is why you find them in Afghanistan, Iraq, Syria, Sudan, Somalia, Chad and lately,Nigeria.

Their ready made recruits are the disenfranchised, the disgruntled, the aggrieved and the extremely poor.They lure this group, along with another group which comprises the young and the impressionable; those looking for meaning and affection in a seemingly callous and apathetic world, with promises of justice and purity of religion.

They promise opium to hopeless minds and purpose to drifting souls. Many of these recruits are then radicalised to the extent that they genuinely believe that they are fighting for justice and doing Allah’s will who will in turn compensate them with places in His bosom. I don’t however, believe for a second that the leaders from Osama bin Laden to Baghdadi to Shekau believe a word of what they dish out. Their goal is more demonic—the pun is deliberate—and more sinister.

It is to reduce the power and influence of the Western world; to acquire money, influence and power of their own which they can use as bargaining chips.

So it is no surprise that no territory captured by these people practices what they preach. They do not practice or believe in humanity which all great religions espouse.Unfortunately, they find sympathies and funds from some world leaders who have axes to grind with established norms.

As it is in the Arab world, so it is in Nigeria. People who should condemn the evil they represent think they see some phantom good which can be exploited. Many main stream Muslims and free thinkers had supported them in the past because they thought these groups were fighting the excesses of the West especially America.

Now,more and more discerning minds find there is nothing pure or altruistic about these terror groups. In fact, their definition of justice is worse than anything the world has ever seen. The West that is being accused is more accommodating of foreign religions, beliefs and cultures than the accusers.

It is time to realise that these people are worse than Hitler, Stalin, Mao Tse Tsung and Mussolini put together and if allowed, will actually destroy world peace and order. We should stop feeding this monster which camouflages as religion and join hands to exterminate it if we don’t want to lose our common humanity. Worse, a great religion could be stained forever.