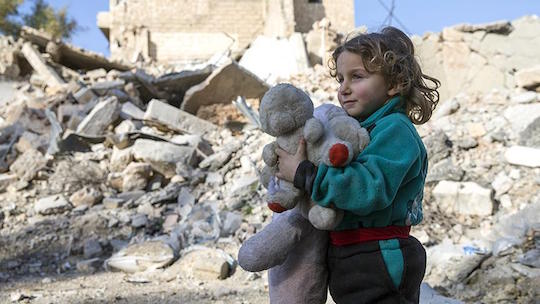 “In 2016, every six hours a child dies or is severely injured in Syria … dramatic figures. But these are only the figures we have been able to verify. We do assume that indeed the number of child casualties is really much higher.”

One of the rare things that everyone in the world will agree with is that no child should ever be harmed. It is a given that they should be happy, safe and well taken care of, because children are the ornaments of our world. They are the pure, innocent and unconditionally loving members of our civilizations.

Regrettably today, countless wars and conflicts make our world a very difficult place to live and children bear the brunt of it.

For example, In Syria, 7.5 million children grew up knowing nothing other than war. For the past six years, they have been waking up and falling asleep to the sounds of bombs, death and pain. According to the Syrian Observatory for Human Rights, the Syrian Civil War has thus far claimed the lives of nearly 14,000 children, which turned even deadlier after foreign powers joined in. In addition, an estimated 2.4 million Syrian boys and girls have to live with the pain and stress of living as refugees in foreign lands, where they are mostly unwanted.

These children have gone through so many difficulties; two in every three Syrian children have suffered some kind of war-related losses. Sometimes it is a loved one, sometimes it is getting their house bombed and sometimes suffering injuries themselves. Unsurprisingly, 50% of Syrian children are no longer in school, in other words, half of the entire future generation of a country is missing the opportunity of social development and building a stable future. In addition, one in every four of these children has the risk of developing severe mental health disorders.

Imagine the disturbed feeling you get when you see a particularly gruesome piece of news on TV. You’d either turn it off or turn your eyes away. These children have to live with things that are probably far worse on a daily basis and sometimes they are on the receiving end of it. Take what happened to Majed, 13, for instance. He and his friend Omar were playing in a public park in eastern Aleppo. It had been two weeks after a ceasefire was signed and they felt somehow safer. Majed recalls seeing a strange shaped metal buried in the sand. When he stepped on it, it exploded. ‘”I was thrown in the air, but I never lost consciousness,” he said. “I was worried about Omar, I didn’t know how to help.”

His friend Omar died, Majed survived with severe injuries to his face and part of his intestines had to be removed. He still needs help to get up and walk.

Even hospitals and schools are not spared. For example, in November of last year, an air raid hit a children’s hospital in Aleppo and the staff had to evacuate patients, including babies still in incubators.

On top of all these difficulties, the country no longer has any infrastructure and the lack of healthcare services has particularly difficult implications for the sick and injured. Today, 95% of the Syrian population cannot access proper healthcare. Think about getting injured, and not having a doctor to take care of you or the doctors not having anesthesia as they are working on your wounds or even antibiotics to make sure that you don’t get infected afterwards. These are only few of the problems that Syrians have to deal with everyday and children have to face them just like the adults.

As mentioned before, most children are not in school and they are usually working at jobs that are too difficult for them. They are frequently subjected to harassment, sexual exploitation and abuse. Child soldiers are also on the rise in the country and reports suggest that underage children are used in the most harrowing tasks like executions or serving as prison guards.

Despite all this, the majority of the world’s countries choose to turn a blind eye to the people of Syria. The neighboring countries, Turkey, Lebanon, Jordan, Iraq, and Egypt have generously welcomed Syrian refugees despite their own strained resources.

And now, the good people of the world are linking up and working hard to wake people world up to the plight of these fellow human beings. For example, pious Christians are calling each other to overcome their fear of unknown, the fear that there might be terrorists if the refugees are taken in:

Jesus called his followers to act. “Love your enemies, do good to those who hate you,” Jesus said. (Luke 6:27, 32) Syrian refugees, of course, are not our enemies. They do not hate us. But even if we thought they were, Jesus tells us to love them.

Yet Jesus calls us to a very different way. He asks us to love our neighbors—regardless if there may be enemies among them.

There is no doubt that these days will pass and one day the Syrian people will no longer need our help. But when that happens, everyone will be left with one question to answer: ‘Did I do what I could when they needed my help or did I just sit back and think only of myself?’