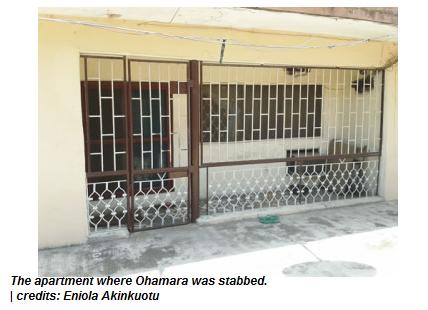 The Lagos State Police Command has started investigation into the murder of a banker, Adindu Ohamara, who was stabbed to death by his suspected homosexual lover in Akoka, Bariga Local Council Development Area  of Lagos State.

It was gathered that Ohamara lived in a three-bedroom flat with his elder sister, Flora and one Collins, an undergraduate of the University of Lagos.

According to residents, the banker  was stabbed repeatedly at his residence located at 26 Obayan Street.

PUNCH Metro learnt that Ohamara, who was believed to be a homosexual, was fond of bringing different men, who were also believed to be into same sex relationship, to his home.

It was learnt that trouble started  when he (Ohamara) decided to get married due to pressure from his family.

A resident, who craved anonymity, said after the banker  had his wedding introduction, a man, believed to be  also  a gay came to fight him.

He said, “A few weeks ago, Ohamara did his wedding introduction and shortly after that, one man came to the compound to fight him.There was a lot of noise over the issue and even neighbours had to come to settle the matter.

“The unidentified man complained that he had been jilted and threatened to deal with Ohamara before he left in anger.”

Our correspondent learnt that on April 9, 2013,  the banker returned home with a  man, who   allegedly stabbed  him at midnight  and left.

According to police sources, hours before the incident, Collins went to Oharama’s room where he met the stranger sitting on Oharama’s bed, discussing with him.

A domestic worker in  the house, who craved anonymity, said he saw the suspect fleeing with a laptop at midnight.

He said, “It was a Friday evening. Ohamara came home with the man and they went inside. I went to sleep but at midnight, I saw the man carrying a laptop and then he opened the gate and left. He did not run so I was not suspicious.

“Around 4am, Collins and Flora started shouting for help. A neighbour came to help them and they took him  into his Toyota Camry   and drove to a hospital.”

It was learnt that Ohamara was taken to Jonken Hospital from where he was referred to the Lagos University Teaching Hospital Idi Araba where he was confirmed dead.

The matter, it was learnt, was reported at the  Sabo Police Division but was later referred to the State Criminal Investigation Department, Yaba.

Our correspondent, who visited the house on Monday, learnt that the police later arrested all the adult occupants of the building, including the security guard identified only as Kazeem.

The policemen allegedly demanded N350,000 from each of the detained persons before they could be  released.

The landlord of the property, Yemi Oketola, said the deceased had issued him two post-dated cheques as payment for his rent.

Oketola  on  hearing of the arrest  of his other tenants,  visited the SCID and appealed to the Deputy Commissioner of Police, Damilola Adegbuyi, for their   release.

He said, “I do not live in the house but immediately I got wind of the incident, I went to the SCID and I met with the DCP in charge. I complained that a neighbour, who took Ohamara to the hospital  ,was  arrested. The DCP promised that my tenants would be released.

“When I went to see the Investigating Police Officer, he informed me that the cost of bailing each person was N350, 000. I called the DCP and he was very angry when he heard about the demand. He said he would make sure that the tenants were released.”

When contacted on the telephone, the spokesperson for the state police command, Ngozi Braide, confirmed the murder.

Braide however said she could not confirm if the deceased was a homosexual or not.

She said, “According to information I got at the SCID Homicide unit, there are only two suspects in custody, the deceased’s sister (Flora) and the UNILAG student (Collins). I am not aware of any other arrests.

“Also, I am not aware of any N350, 000 bail because bail is free. Investigations are ongoing and we will get to the bottom of it.”