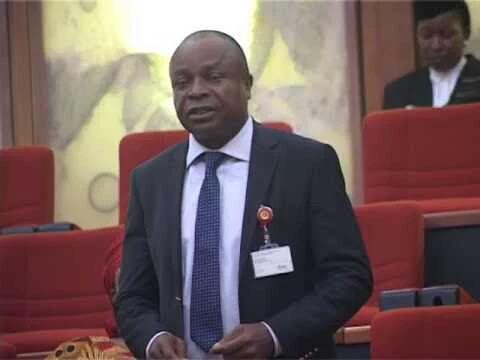 The member representing Akwa Ibom South Senatorial District in the Senate, Senator Nelson Effiong has been petitioned by a Lagos based human rights lawyer, Mr. Inibehe Effiong over alleged criminal trespass, malicious damage to property, stealing, criminal conspiracy and conduct likely to cause a breach of the peace by the Senator.

In the petition addressed to the Commissioner of Police, Akwa Ibom State, the human rights lawyer stated that Senator Nelson Effiong has taken several criminal actions against a widow and her family and boasted that he can do whatever he likes without consequences.

The petition reads in part:

“Our Clients owns a property (land) situated at Plot 21A, Unit E, Ewet Housing Estate, Uyo. Senator Nelson Effiong is the owner of a property known as Destination Night Club (previously known as Millionaires Club) situated beside our Client’s property at the above address.”

“Senator Effiong with his privies, assigns, staff and customers have persistently trespassed on our Client’s property while purporting to exercise “his right of access” (which he does not have and cannot legally, morally or factually lay claim to) to his own property. A visit to the property and assessment of the other buildings located along and within the area will reveal that the purported right of access alluded to by Senator Nelson Effiong has no architectural, legal, moral or logical basis.”

“The said Destination Night Club usually holds an all night party three times every week. During the duration of the party, customers/attendees who patronize the club, many with their cars, will invade our Client’s property and convert same to a parking lot. They do not only park their cars, they also make our Client’s property an extension of the club by carrying on with their amorous, immoral and anti-social activities there at despite protestations by our Client.”

“On the 14th of July 2015, Senator Effiong sent and directed “his boys” to demolish and destroy the perimeter fence errected by our Client on their land.

The lawyer also accused Senator Effiong of stealing blocks belonging to his Client.

“As if these were not enough infractions, on the 18th of November, 2016 Senator Nelson Effiong through his boys, in his illegal bid to halt the erection of new fence by our Client on their land having previously demolished the old fence, entered our Client’s property and forcefully took away large quantities of blocks moulded and kept by our Client. Till date, the stolen blocks have neither been found nor returned.”

The lawyer revealed that efforts by his Client to dissuade Senator Effiong from further oppressing them were rebuffed.

“Sir, our Client has made direct entreaties to Senator Effiong for him to retrace his steps and desist from his criminal activities in respect of our Client’s land, but he rebuffed them.”

“In one of the meetings between our Client and Senator Effiong which took place sometimes in the month of September 2015 at Nelson Effiong’s property, Destination Night Club, Senator Effiong pointedly told the representative of the widow’s family that what really angered and made him to order his boys to demolish our Clients fence was that our Client did not inform him before going ahead to erect the fence – on our Client’s land.”

On earlier actions taken against the senator, the lawyer said that his Client had made a report at the Ewet Housing Divisional Police Station in Uyo without success.

“Sir, in order not to resort to self-help by taking laws into their hands, our Client reported the actions and activities of Senator Nelson Effiong to the Ewet Housing Divisional Police Station, Uyo for investigation and prosecution. However, our Client have been informed that no significant progress has been recorded at the Ewet Housing Divisional Police Station due to the snubbing attitude of and lack of cooperation by Senator Nelson Effiong, his boys and the staff of Destination Night Club with investigators.”

“It is instructive to note that the Matriarch of our Client’s family… is severely traumatised, apprehensive and discomfited by the threatening, menacing and provocative actions and activities of Senator Nelson Effiong. She and other occupants of our Client’s property are presently scared for their lives.”

“Senator Nelson Effiong has continuously boasted to our Client that he can do whatever he likes with our Client’s property and get away with it and that there is absolutely nothing that the Nigeria Police Force or any other authority or person can do to him. This arrogant and provocative disposition of Senator Nelson Effiong has left our Client in a state of helplessness; totally devastated and humiliated.”

The human rights activist and lawyer ended by appealing to the Akwa Ibom State Police Commissioner to intervene in the matter and bring Senator Effiong to justice.

“In the light of the foregoing, we respectfully request you to use your good offices to investigate the criminal actions and activities of Senator Effiong and bring him to justice expeditiously.”

“While we agree with Senator Effiong that he is “a big man”, we are very certain that the Law, the Nigeria Police Force and the Criminal Justice System are bigger and more powerful than him”‘

“The victim who pleads anonymous implores that Senator Nelson Effiong’s criminal actions should be investigated and justice should be served outrightly.”

The affected widow and her family have requested temporary anonimity pending when legal actions are taken. The petition was received and acknowledged by the police.