Leaked: Letter To Tompolo From His Greatest Fan 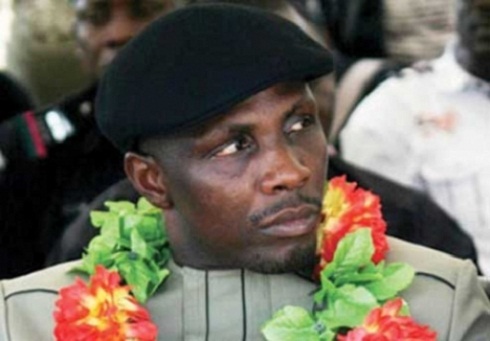 How are you and how is the family? Hope all is well.

I am writing this letter to tell you that I am your greatest fan. Please do not mind all these people who are jealousing you. You are cutting your chunk of the pauper’s loaf… I mean, national cake, who has the right to complain? You are not the first thief, nor will you be the last so whose business? Jet is the new car, whoever does not like it should jet!

Government Tompolo my brother, nothing do you. You have done no wrong. You fought and terrorized for ‘emancipation’ of the people and emancipated yourself. Now you fly with the big vultures. Who has the right to complain and ask what you have done for your people? You are not the messiah-on-earth, like her highness, the Dame, so why should you have rather used your Goodluck-given money to set-up a research and development mega center in Warri for the hapless and helpless youth of Nigeria? Why should you have spent your share of the masses wealth, cleaning up the swamps to save lives? Did you spill the oil? Why should you spend your bounty creating grassroot employment; developing large scale commercial fishing in the Delta? Are you an American with such compassion and communal foresight? Definitely not! You are a simple and ordinary Nigerian. Chop, I chop, awwuf no dey run bele. If wishes were airplanes, beggars will fly. When you complained, you never claimed your gripe was with others’ stealing the people’s money; your movement was always for the opportunity to steal it for yourself.

And who was that that said you were paid $103.4million (N15billion) to secure the oil pipelines and that rather now, oil vandalism is at its worst in history? They better mind their business oh! Are you Lord Luggard that created Nigeria, or are you Mandela? Your name is ‘Government’ and not Jonah who volunteered and jumped into the belly of the fish to save the boat, so why will you be the first thief to do at least quarter of what he was paid for? Tompo, this is your greatest fan telling you to mind no one.

Tompolo, given the opportunity you have, I myself who is talking here, I will buy bombardier and fly as high as possible over the common rats. I wish the plane can drop droppings, so I can even mess on them. Who no like better thing? Money fall in, Aluta stop! Your boys will never stone you for betraying them, they will still fight and die for you, trust me. It is the way of the beast. They respect you with your jet, and they will even lie down for you to crush them as runway to take off. People will break heads with mace’s for you, Tompolo. No more go-slow. In the words of Pastor Oritsejafor, ‘your schedule is very complicated, your mission and service for humanity deserves no delay…why should you wait unduly for 5 hours layover at Jakarta airport, when you can use that time to save the Niger Delta!’ Why should the poor elderly get some welfare from their rightful entitlement in the nation’s coffer, when they can simply die while you fly? Why should Nigeria’s wealth be used to build roads to reduce deaths, when you can dip in and jet off? Why should those whose homes got flooded and are still squatting, dying in silence, be rehabilitated, when you and your friends can have a jets party?

How will you be remembered, if you were known to have given it all for your townsmen, statesmen and countrymen? A moral Tompolo! Never! Virtue na for mumu. Now your name will be etched in the sands of time, like Abacha. Like Anini. Like Hitler, like Maitatsine, like Osama, you will never be forgotten. There f-lies Government Tompolo. By the way, presidential bodyguard Asari done deposit for his own? Soon you people can be doing sky race fa.

Big boss, permit me tell you a brief story to make you appreciate how superbly you are helping us reduce the overpopulation problem in Nigeria: You see; one day in 2000, when I was doing my house-job, there was a young man who needed N50 for chloramphenicol to defeat his Typhoid fever. We had placed him on some of the drug and he was improving, able to talk to his fiancé. As they ran out of money, we house-officers donated the N50 to keep him on the drugs till his fiancé returned from her journey home to get more money. That Friday as some of us closed, a colleague came to me and returned my N20 contribution, telling me that his fiancé had returned. Long story short, she did return, but with no money. By Monday when I returned to work, the young man’s bed was empty. He died because Nigeria’s big boys stole funds that should have supplemented health-care. N50- one life lost. Now, just imagine how many lives you are helping us take off the roads, to reduce our traffic congestion and competition for dwindling resource. Your $13 million bombardier money > lives? Your $100 million oil protection money that you have ‘rightly’ used to protect the oil thieves > lives? And so much grease for you, chief, the N1.5 billion Nigeria loses daily, thanks to your overall protecting only the thieves and vandals with the contract largesse from your brother, Mr. Presido > countless lives!

And lest I forget, please ignore the Pope who offered the following prayer against imperialists and the arrogant, usurpers, this Saturday at St. Peter’s Square: ‘When man thinks only of himself, of his own interests and places himself in the centre, when he permits himself to be captivated by the idols of dominion and power, when he puts himself in God’s place, then all relationships are broken and everything is ruined; then the door opens to violence, indifference, and conflict.’

Is it not the good book that says: ‘For the poor always ye have with you; but me ye have not always.’ The question the Pope should ask himself is- if there are no usurpers, aggressors, mismanages, looters, how will this prophesy be fulfilled? And my brother, how will the kind get the reward promised: ‘He who is kind to the poor lends to the LORD, and he will reward him for what he has done.’  If ‘messiahs’ like you do not loot the money of the masses and condemn… I mean, deliver many more to poverty.

May the roads in the sky be free of potholes, and may red light never catch your plane. May your landings be gentle like a baby sleeping.

Sincerely yours from the ground

Islam And The Doctrine Of Peace On ...