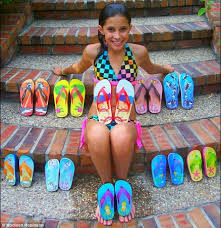 Madison Robinson’s story is the type of story I like to spread. Such stories inspire others and can galvanise us to action. She is only fifteen years old but she owns her own flourishing business. She is also a philanthropist.

She has created a flip-flop business which she calls FishFlops. Maddies’ FishFlops are beautiful flip-flops, which demonstrate her love of ocean animals and beach. A news article reveals that more than 30 stores placed orders the first time the flip flops were exhibited at a trade show and that so far, no store has rejected them when they have been approached to sell them.

Maddies’ parents and friends have been her major source of encouragement. She disclosed this in an interview: “When I was 8 years old I was drawing and coloring and looked over at my many pair of flip-flops in my room. I thought I would draw some of my favorite ocean creatures on an outline of a flip-flop. I decided to call them FishFlops® and I showed my dad. He was so excited… my family and friends thought the FishFlops® were really neat and they said they would buy them. My family and friends encouraged me to keep on creating.”

Maddie, who started her first year of high school last year, said her dad wouldn’t let her spend the money realised from the business, which was believed to be around $1.2 million, until she gets to college. Her story again reinforces what you apparently already know: Don’t be quick to discard any idea that drops into your mind because with the right advisers and constant reassurance or encouragement, that idea may turn out to be a life-changing idea.

I think I should also add that we are all creative. There is no one who is not creative. We only need to identify our area of creativity, nurture it and launch it. You must seek out platforms through which you will express your creativity or else, no one will know you possess such creativity. Parents should also be careful not to impede their children’s creativity.

The big question is: where is your area of creativity?

Darasimi Oshodi is a blogger. Read his blogs at darasimioshodi.blogspot.com