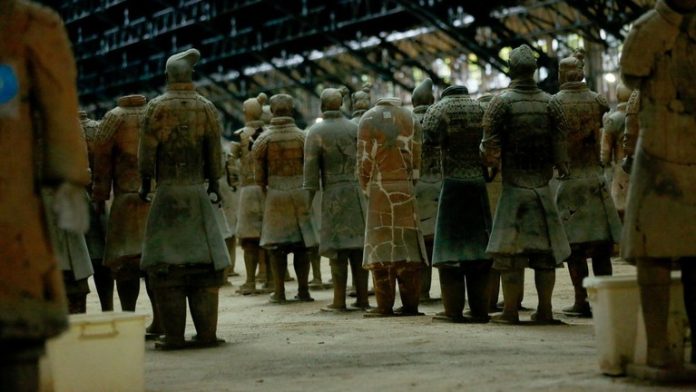 The discoveries were made during an excavation at Pit No.1, the mausoleum’s largest burial pit, which spans 14,260 square meters.

Archeologists have recently made several significant discoveries, according to Shen Maosheng, a researcher at the Emperor Qin Shi Huang’s Mausoleum Site Museum.

Researchers believe the Terracotta Army was created by Greeks who arrived in China before Marco Polo.

According to him, the scientists were able to determine the formation in which the figures were placed into the ground.

According to Shen, researchers have also figured out how the terracotta sculptures were made. The carvings on the warriors’ bodies were completed first, followed by the attachment of the arms.

In 210-209 BCE, they were buried in the ground around his mausoleum in order to protect the ruler in the afterlife. In 1974, the discovery of the figures caused a sensation. Since then, excavation at the site has been ongoing. Over 8,000 soldiers are thought to be part of the underground army.