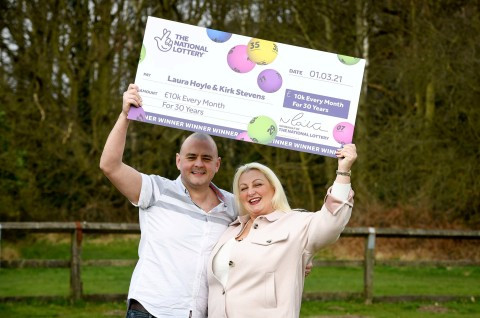 Kirk Stevens expected to be financially secure after winning a £10,000 a month for 30 years lottery with his live-in girlfriend.

Instead, he’s hurt and angry after Laura Hoyle, 40, allegedly dumped him, moved into a £500,000 new-build house, and cut him off from the ‘allowance’ she was giving him from the £3.6 million jackpot.

Kirk, 39, told her to pay £25 a week into the lottery for them instead of paying her own share of the rent fee while they lived together, so she left with the money.

When the couple won the Lotto’s Set For Life prize in March 2021, they made headlines.

They both announced that they were starting a ghost-hunting business after posing with a lottery check written in both of their names.

Kirk, a Rolls-Royce engineer, met Laura through a friend in 2018 and they moved in together quickly, with Laura moving into his £240,000 three-bedroom detached home in Hucknall, Nottinghamshire.

Kirk added that he didn’t ask for a ‘penny’ in rent when she offered to contribute, instead opting for a lottery deal: ‘She spent around £25 a week and told me that if we won, we would both live it up.’

Laura continued to play the lottery from her account after landing a job with Hermes, then ignored a message from Lotto bosses informing her she had won, fearing it would only be a £5 prize.