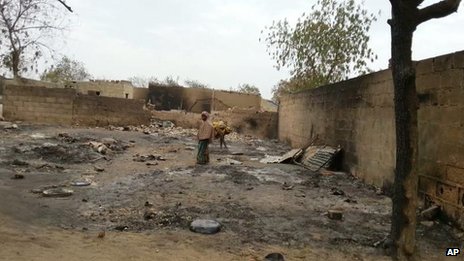 Local authorities and residents said the insurgents have succeeded in taking absolute control of Baga, a fishing community along the shores of the Lake Chad after troops of the Multinational Joint Task Force (MNJTF) left their formations.

It was gathered that most of the people killed were pursued to the bushes by the insurgents and others died while trying to cross the Lake Chad into neighbouring communities in search of safety.

District Head of Baga Alhaji Baba Abba Hassan who spoke to our correspondent yesterday debunked claims of fresh attacks on Baga on Wednesday, stressing that most of the people killed were victims of “sustained attacks that started” on Saturday.

“The fact is there was no fresh attack on Baga (on Wednesday) but a sustained onslaught on our helpless people that continued unabated since Saturday,” he said.

Baba Hassan also expressed doubts that over 2,000 people were killed as reported by some media outlets.

“Of course, Baga is a big town and many people have been killed but it is outrageous to say 2,000…What I know is that hundreds of people especially the old, children and women have been killed by the insurgents.

The district head, who described the attack as well coordinated, said hundreds of insurgents from Nigeria and Chad descended on the fishing community.

“Since the day of the attack, they did not move an inch; they are in Baga and they are going from house to house, searching for people and killing those that are not lucky,” he said.

He said the onslaught, which swept away more than 10 villages under the local government, has left many families without their children, husbands and some had their wives gone missing.

“Baga now is finished. They burnt Baga entirely today. The aftermath left many people in Baga who could not see their children, or you see a husband looking for his wife and vice versa,” the chairman said.

However, the federal government is still reviewing the security situation in Baga with a view to improve logistics and support to security forces to enable them defeat insurgents in the area, coordinator of the National Information Centre, Mr. Mike Omeri, has said.

Mr. Omeri who spoke at the security briefing in Abuja yesterday also said that the alleged mastermind of the 2014 Nyanya motor park bomb blast, Sadiq Ogwuche, will soon be presented for trial.

Daily Trust reports that hundreds were killed and many houses burnt in Baga in 2013.