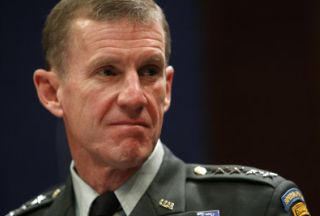 Presstv- Kabul circles say the dismissal of US commander was over leaking information including NATO’s connection with the executed leader of the Jundallah terrorist group, Abdolmalek Rigi.

He dismissed the official reasons for the firing of McChrystal, saying his growing friendship with Afghan President Hamid Karzai and intelligence leaks may have triggered the replacement.

The move caused a scandal, and a British minister was sacked. In retaliation, London is believed to have released confidential statements by McChrystal to White House officials, paving the way for the commander’s removal from his post.

NewsRescue- Obama cuts US funding of chaos in Iran

Ruhi says many insiders also link the decision to the escalating number of US casualties in the war-torn country since the beginning of 2010.

[ad#medium]
“The general opinion is that Petraeus’ reputation as the ‘butcher of Iraq’ is meant to intimidate militants as well as Afghans,” he added.

Furthermore, Karzai’s increasingly vocal protests over the civilian death toll of US and NATO operations and McChrystal’s acknowledgement of mistakes fueled tensions with the US Ambassador to Kabul, Karl Eikenberry.

The friendship between the two also entailed other top intelligence leaks, with McChrystal briefing Karzai on plans to mobilize Taliban militants from the volatile south to the north, Britain’s arms and drug smuggling route from Afghanistan to Central Asia as well as links with the Russian mafia.

McChrystal’s remarks to Rolling Stone magazine, in which he mocked a string of top Washington officials, raised speculations about the deepening rift among the echelons of the US government.

Obama picked General David Petraeus on Wednesday to replace McChrystal as the commander of US and NATO forces in Afghanistan. The choice of Gen. Petraeus, the architect of the Iraq war surge strategy, to replace Gen. McChrystal, was because he was well known to the Afghans and Pakistanis, and had ties with Washington’s NATO allies.

In an interview with Rolling Stone magazine, Gen. McChrystal had described his civilian bosses as “clueless” and called their European allies “wimps.”

In the interview, Gen. McChrystal said he felt betrayed by the US ambassador to Afghanistan, Karl Eikenberry, and accused him of undermining the Afghan war by leaking a classified cable back in January.

The general also indirectly criticized the US president, calling him “uncomfortable and intimidated.” source