A recent article by one of NewsRescue’s columnists, Dr. Peregrino Brimah brought our attention to the final collapse of MEND, Movement for the Emancipation of the Niger Delta, as any form of a human right and justice organisation.

It goes without saying that MEND is no more. The leaders of the group have been corrupted to their bones and as such they have betrayed the true ideals of the group if it ever had.

We are IN NO WAY SOLICITING VIOLENCE or a return to such cowardly conduct of war, however we are asking where MEND is since the plight of the common people of the Niger Delta is in no way better than it was before. The people are left to live on handouts from the government with no true opportunities for development or employment provided. Their charity-wages are even being embezzled at local and Federal level.

The only employment in the Niger Delta is in high sea piracy, illegal oil bunkering, illegal fuel refining and selling stations and the like. These activities have continued to pollute the land and waters beyond repair.

While the leaders of the group today, the likes of Government Tompolo engross themselves in the amassing Nigeria’s funds, the people have been abandoned.

To add treachery to the regrettable situation, the group’s phenomenal leader remains imprisoned in South Africa on evidently on charges trumped-up by the President of Nigeria, Goodluck Jonathan and MEND is no where to be found. There is no legal movement or other peaceful protest for Henry Okah to be repatriated to Nigeria for a true and fair trial.

The many issues brought up by MEND leader, Henry Okah in his court affidavit cannot be ignored. Henry Okah may be guilty of other acts some of which have possibly been pardoned under the Amnesty act, but there is little evidence he is guilty of the Abuja Independence-day bombings which he provided evidence to actually accuse the president who had him locked up of.

This president will never release Henry Okah for obvious reasons. When he does get released soon, possibly under another government, how will the comrades of the Niger Delta look at him?

The earlier article by Brimah follows:

As Nigeria is beleaguered and crumbles under deadly terrorism, there are several issues of grave import in the registered testimony given by leader of MEND [Movement for Emancipation of the Niger Delta], Henry Okah in Johannesburg, South Africa; CASE NO: A570/10 between Okah, Henry Emomotimi Applicant, And The State, for the indictment dated: 23rd August 2011. This 42-page affidavit was presented by May 2012 for case slated 1st October 2012.

The role of any possibly involved Nigerian government and presidency person or partner must be thoroughly investigated as the need to unravel the evolution of terrorism in Nigeria to its current level as one of the worst cases in the world; with Boko Haram registered as a top terror organization and high sea piracy off Nigeria’s shores climbing to the world #1 position, precipitates.

These matters become most significant at a time when the nation is on the precipice of losing one of its states, Borno to the terrorists and has lost up to or more than 100,000 lives in addition to billions of dollars in livelihood, directly and indirectly due to the terrorism that is now rapidly spreading to Nigeria’s northeastern neighbors.

b.in the 1stOctober 2010 Abuja independence day bombing– for the elimination of political opposition from the North in the form of General Ibrahim Babangida. The bombings of 1 October 2010 was also intended by the President Goodluck Jonathan Government to create anti North sentiments nationwide in order to galvanize support from other sections of Nigeria against other Northern candidates in the Presidential elections. Line 132.

c. obstructing justice and witness tampering bysoliciting the assistance of MEND leader Henry Okah— in getting the central [MEND] group to retract their claim of responsibility. [Okah] was contacted by amongst others, Mr Moses Jituboh, a senior police officer and Head of Personal Security for the Nigerian president and Mr Tony Uranta, a close ally of President Goodluck Jonathan who caters for “dirty tasks”. Line 135.

d. in deliberately creating and promoting deadly ethnic strife and anti-North sentiment in Nigeria as contains— 144. The final SMS sent [by Mr Tony Uranta; cell +2348075407801] at 10h28:32 am states; – “The government will blame on Northern elements.” 145. When confronted by the Nigerian media about these claims, Mr Uranta’s defence was that his phone was stolen on the day in question and the thief must have sent me the SMS’es.

e. in exonerating MEND and Henry Okah for bombings the MEND group claimed responsibility for political gains, as stated—146. President Jonathan’s earlier exoneration of MEND and me in the bombings of 1 October 2010 was done with the belief that MEND would retract its statement paving the way for President Jonathan’s planned persecution of political opposition. I attached hereto marked Annexure “HEO 11″ several press articles published on the internet in this regard.

f. in publicly misleading and defrauding the Nigerian public by seeking election on a premise of only running for a single term to complete 8 years in Aso rock, whereas this was plotted ab initio with tenebrous intent— 95. He [Mr Godsday Orubebe the Minister of Niger Delta ] assured me in this meeting that President Goodluck Jonathan was determined to ensure that political power never returned to the North which Mr Orubebe described as parasites. 96. To achieve this, President Goodluck Jonathan would pretend to do only one term in office and once entrenched, he would insist on a second term.

g. in orchestrating the arrest and sentencing of MEND leader in South Africa on trumped-up charges built with [embarrassing police work; evidence showing no trauma; Pictures taken were deliberately made to be of poor quality; conflicting evidence, conflicting accounts of the evplosizes and detonation method; lack of purchase receipts, etc –SaharaReporters, May 3rd, 2012]—138. My refusal to cooperate in this scheme resulted in President Goodluck Jonathan placing a call to President Jacob Zuma during the evening of 1 October 2010, requesting for President Zuma’s personal assistance in securing my arrest. My noncooperation was interpreted by President Goodluck Jonathan as support for the Northern politicians. The South African Government’s direct interference was responsible for securing search and arrest warrants against me. 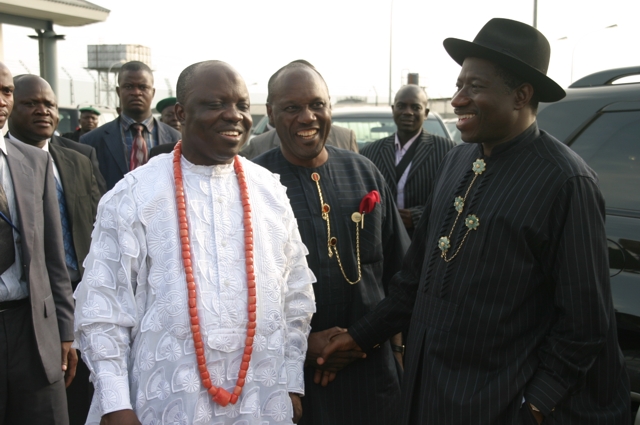 Henry Okah suspiciously remains the only terror group leader orr otherwise related highly placed individual to remain under arrest for terror related offences in and out of Nigeria.

President Goodluck Jonathan has been connected to several events of MEND terrorism during his stint in Bayelsa office, according to US documents and is designated a patron of he group according to this linked, Texas STRATFOR Intelligence think-tank publication.

The sudden increase in the level of terror after the October 1st bombing and the acquisition of deadly bombing skills by Boko Haram in the northeast which has limited its attacks to the north of Nigeria and has been used as predicted by Henry Okah in his disposition, almost strictly for the castigation of “northern elements,” and fomentation of religious and ethnic sentiment in Nigeria of unprecedented levels, prompts thorough and careful audit.

The MEND leader may hold the keys to many questions Nigerians need answers to. It must be stated at this point that current acclaimed heads of the struggle of the South have betrayed Henry Okah, the Niger Delta and Nigeria at large, most likely for some financial benefit by not legally demanding the extradition of Henry Okah to Nigeria for a full and proper globally supervised investigation.

A chief witness, former NSA Andrew Owoye Azazi who held the top office with the intelligence to know the roots of the terror was been killed in a helicopter accident in December of 2012 after being fired from office. Henry Okah is the next high level witness.

We hereby call on the Nigerian people and government to urgently press for the extradition of Henry Okah and investigation of charges against him and accusations against the Presidency and associates.